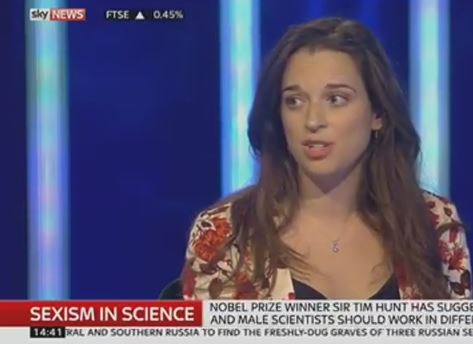 It’s hard to keep up with the latest trends and nuances in feminist science, which appears capable of holding many and conflicting opinions simultaneously while never varying in its desire to see men fired. Several months ago, when a team of nerdy sorts landed a probe on a distant, speeding comet, a boffin’s vulgar shirt  upstaged that achievement. The fashion sensitivities of serious scientific women must always be honoured, the sisters shrieked, thereby transforming the celebration of a magnificent, improbable triumph into a discussion about shirts and fashion. Stereotypes, anyone?

This last week it was Nobel Laureate Tim Hunt who crossed feminism’s foul line by observing, in what he insists was a jocular tone, that women flood laboratories with tears when their work is criticised. Hunt, 72, subsequently expressed his regrets and resigned, but that was not the end of it. As is always the case, TV’s appetite for talking heads and trivialities prompted the UK’s Sky News to stage a debate between a woman who can do sums and a man who has her measure. Their amusing debate, which can be viewed at this link, elicited the view that it is a near-capital offence to mention that women are more apt to cry than men. Deliciously, that opinion was expressed by a woman, Dr Emily Grossman, who mentioned that she had herself been known to haul out the hankie from time to time. Consistency, anyone?

Well, yes, consistency of sort. At the TV encounter’s conclusion, Ms Mathematics took to Twitter and announced that she had been hounded and abused in a most misogynistic fashion by XY louts, which is the standard whine whenever feminists make a lot of noise on issues no one else gives a fig about. Indeed, such purported attacks are very nearly blessings. Were it not for alleged social-media assaults the ladies at Fairfax Media’s Daily Life would have little else to discuss but hemlines, lesbian discos, the need to show three-year-olds mummy’s vagina and the white racism of pop songs from decades past.

Dr Grossman’s interlocutor, Breitbart London’s Milo Yiannopoulous, rather doubted that this shock-horror chauvinist backlash had occurred and went looking for evidence. As he explains via the link below, after failing to find the slightest trace of male abuse, he concluded that, when there is no actual abuse to complain about, the fictional variety will suffice.

The curse of soccer