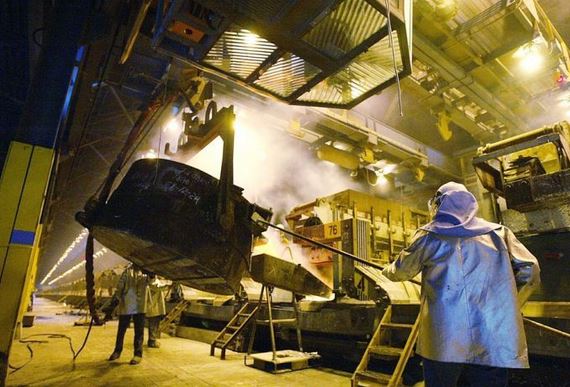 The pot line at Alcoa’s plant in Portland when not being paid to stand idle.

It was 1949 and a very different Australia when George Bowden, Country Party member for Gippsland, addressed the then-contentious matter of aluminium production in Australia. As is invariably the case when taxpayer money – three million pounds in that instance — is dedicated to aid the establishment of commercial enterprises, debates about where the plant should be built and who should run it produced a clamorous white noise of conflicting demands and agendas.

Building a smelter in Tasmania was one option keenly supported by – surprise! – Tasmanian politicians. Bowden, a highly decorated veteran of Gallipoli and the Western Front, predictably put the case for Gippsland, where he argued the LaTrobe Valley’s brown-coal fired power plants were handily placed to feed watts straight into the pot line. More than that, first-rate bauxite deposits were located just to the north in the mountains of the High Country, plus there were ports to the south for shipping the finished product.

Wherever it was built, however, Bowden was adamant that it had to be built if Australia was to secure its industrial base. He put it this way

“We have the wherewithal and technical ability and knowledge in Australia to develop this industry. If the Government does not want to go on with the project let it vacate the field of aluminium production and hand it over to those who can and will develop it.”

Tasmania got its smelter and so did Victoria – two of them actually. The one at Point Henry, near Geelong, was shuttered in 2014, leaving Alcoa’s facility at Portland as the sole survivor. The choice of its location wouldn’t have pleased Bowden, not only for the jobs that didn’t go to his electorate but for the vote-buying absurdity of piping electricity some five hundred kilometres from the LaTrobe Valley to the Western District.

Still, his desire to see a homegrown aluminium industry was fulfilled, which was some consolation for a supporter of the now quaint notion that it was in Australia’s best interests to become a productive, prosperous nation with a vital industrial base.

Ah, how times have changed! Where once government dug into the public purse to foster industries, these days it pays them to stand idle. As the ABC reported as the recent heatwave cast the shadow of looming blackouts over the national grid

…power providers were told on Thursday night to be on standby to “provide contingency support” under the Reliability and Emergency Reserve Trader (RERT) scheme — a short-term measure put in place to deal with potential electricity shortfalls across Victoria and South Australia this summer.

Alcoa’s aluminium smelter at Portland, on Victoria’s far south-west coast, confirmed it has been warned it may need to rein in power use on Friday afternoon.

“AEMO has asked Alcoa Portland Aluminium to be on standby this afternoon and AEMO operational control will decide whether this request is activated,” a spokesperson for the company said.

“If managed appropriately Portland Smelter can be safely curtailed for short time periods (up to one hour) to provide much needed capacity during peak demand periods.”

And what is a RERT when it’s at home? AEMO puts it this way:

This usually involves the interruption of, or reduction in, the consumption of electricity by a scheduled load that would not ordinarily be available to the market.  The load to be interrupted or reduced need not be located in the same region as the region in respect of which reserve is sought by AEMO, but must usually take its supply from the region experiencing the reserve shortfall.

Free-marketeers will object on principle to state entities picking winners and backing their choices with other people’s money. But set that aside and a sad, shameful truth becomes self-evident: Where once public monies were used to establish and advance industry, productivity and the jobs that go with it, they are now dedicated to encouraging production of, well, nothing whatsoever.

Something has gone seriously wrong. Follow this link or the one below for a pithy analysis of such insanity from Jo Nova. If absurdity’s apologist in chief, Energy Minister Josh Frydenberg, can spare a few minutes from an ongoing crusade to wreck his own career, he would do well to check it out. Then again, having had his paean to electric cars demolished chapter and verse by Judith Sloane in today’s Australian, it may well be that he is so shell-shocked he has resolved to restrict all future reading to nothing but the Greens’ comforting pamphlets and eschew common sense altogether.

Blame it on the Kellys