Slave to fashion,
not history 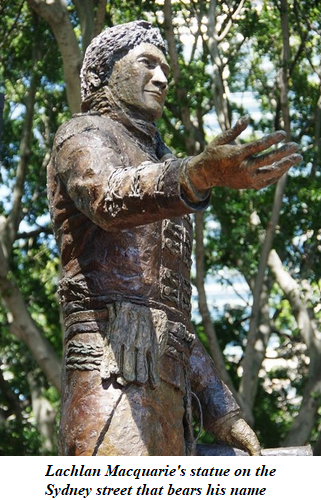 It’s a mixed bag for readers of The Australian today (June 23). On the one hand, friend of Quadrant and frequent contributor Daryl McCann has an opinion piece on the “dictatorship of bohemia” which has seen everyone from Captain Cook to J.K. Rowling pilloried for alleged crimes against humanity, defined in the case of the Harry Potter author as stating that men are men, women are women and no amount of surgery or lipstick can make it otherwise.

Sadly, there’s also a report from staffer Jacqueline Magnay purporting to disclose that Governor Lachlan Macquarie “was a slave owner who inherited money from a plantation in Antigua.”

Ms Magnay is based is in Europe, which makes it rather difficult to further her education by introducing her to Keith Windschuttle, Quadrant‘s editor, who would be only too pleased to set her straight. Instead, she’ll have to read his three-part series on the myth of Australian slavery.

Those installments  can be read here, here and here — especially the essay at the last link, in which Keith discusses the Enlightenment values of the Founders and explains:

Until 1796, Lachlan Macquarie had unquestioningly accepted slavery. He was then a captain in the British Army in India. At the time, India had a population of some eight million slaves and the institution had existed since time immemorial. Indeed, in 1794, when he joined his regiment in Calicut, Macquarie purchased two slave boys from the market in Cochin.

His first wife, Jane, was the daughter of the chief justice of Antigua in the West Indies and when he died she inherited a small number of slaves there. Jane died of consumption in 1796 and in her will she set her slaves free. Her husband followed her example and emancipated his own Indian slaves, enrolling them in a parish school at Bombay to learn to read and write.

While Ms Magnay wrote in ignorance, various commenters in the thread below her you-heard-it-here-first pseudo scoop did not. A sample:

“1810 was 210 years ago,” observes a commenter with the colourful handle of Botswana O’Hooligan, “but a certain sect on this planet owns and deals in slaves by the hundreds of thousands right now so why don’t these people lambaste them with the utmost vigour?”

To the left on our homepage, contributor Harry Cummins makes the same point at considerably greater and more detailed length.

Then there is this from a commenter at The Australian calling himself simply ‘Phil’:

Fragile folk put all their energy into something that may or may not have occurred 200 years ago.

Meanwhile, we see ridiculously cheap clothing for sale that was likely made under near slavery conditions yet we do nothing.

Ms Magnay really should take out a Quadrant subscription.