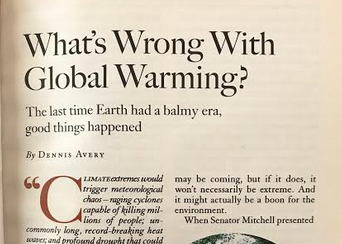 I was waiting around at Sunbury Day Hospital, north of Melbourne, last week for an eye-cataract job. I reached for a Reader’s Digest half-buried among the Hello and Take 5 pile of magazines. The Digest’s cover lines included “Politicians’ Outrageous Perks: This privileged class is living the high life – on our money.” Good job, Reader’s Digest.

But hang on, look at the item immediately below on the Contents page: What’s wrong with global warming? The last time Earth had a warm-up, good things happened.

I flicked to page 45. It’s a piece by Dennis Avery, a veteran US food scientist. There’s an illustration of a yellow blossom in a sort of rain-forest, with the caption, “Robust forests – A warmer world could create plant heaven.”

Dr Avery discusses how the Medieval Warm Period (MWP) helped agriculture and civilisation to thrive, and ridicules the claims about warming costing economies trillions of dollars this century. Here’s how he concludes his three-page essay:

“History and the science of climatology indicate that we have nothing to fear but fearmongers themselves. Any global warming in the 21st Century should be modest, bringing back one of the most pleasant and productive environments humans – and wildlife —  have ever enjoyed.”

Who is this author Avery? Aged 82, he’s been a food policy analyst with the US Department of Agriculture and Department of State. He’s now director of the Center for Global Food Issues at the Hudson Institute, where he edits Global Food Quarterly.

I flopped back in bemusement. I had no idea Reader’s Digest is spearheading the sceptic cause. I thought it had long been captured, like Time and The Economist, by the junk scientists and their media shills. Holy (greenhouse-gas emitting) cow! the Digest still has a global circulation of 10 million with maybe 50 million readers. It remains  the world’s largest paid-circulation magazine.

I suspected the warming-is-good piece was the sceptic Digest’s sly attempt to undermine the UN’s COP 24 at Katowice. There was no counterpiece that  “warming is bad” or “Avery is in the pay of fossil fuel interests”. Avery’s piece is presented as an orthodox view, needing no rebuttal from fringe groups like the IPCC or our own Climate Council.

Then I took another look at the cover. Damn! It was dated August, 1999. I know hospital waiting-room magazines can be old, but 20 years old might be a local record.

All the same, that the Digest ran such a sceptic piece in 1999 was quite striking. No mass magazine would do it today.  More warming is good for the planet? No, no, no! More warming means horrors to beggar the imagination. Humanity, life itself, would face extinction.  The science is settled. Only limitless landscapes dotted with towering wind turbines can save us from an imminent bonfire of the humanities. Send money now.

Apart from discovering that the media was more open-minded in 1999, I departed Sunbury Day Hospital with a refurbished right eye. Who knows what I might find in the magazine pile when I come back next week for the left eye job?

Trees died for this