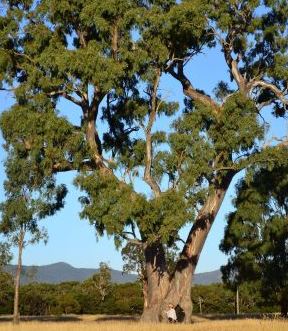 The Age reports on efforts to rescue a particular tree (above) from road-widening efforts on a highway to the west of Melbourne:

…It was identified this month by members of Victoria’s Indigenous community as a living example of a sacred birthing tree.

Three women have since submitted an application with Aboriginal Victoria to have the tree protected under heritage laws, in a last-ditch bid to stop it being cut down.

“Identified”, eh? And how was this identification validated? The Age once more (emphasis added):

“Indigenous woman Carmel Thannhauser saw the tree for the first time  this month, and was one of the three women who later lodged an application with the Ballarat office of the Aboriginal Heritage Register.

Ms Thannhauser said it was clear that the hollow had been crafted by human hands.

“I have no expertise, apart from feeling and understanding, however I just know that this tree is a birthing tree,” she said.

Ms Thannhauser’s is a remarkable story, as the catalyst for her activism, and presumably her clairvoyance, was a bolt of lightning that 30 years ago zapped through the window of her mud-brick home and laid the poor woman out cold. When she returned, as she puts it, from “an out-of-body experience”, her life’s mission had been made suddenly clear.

“When I came back I said to [husband] Paul, ‘We’re going to really make a difference’.”

In this age of neo-Rousseauian mysticism it can’t compare with Ms Thannhauser’s “feeling and understanding”, but a 2013 survey conducted as part of a cultural-heritage management plan and compiled at the request of  the Djab Wurrung traditional owners found the tree was, well, just a tree, nothing special about it whatsoever.

Whether that verdict stands now that Aboriginal Victoria is involved remains to be seen, but if the means and methods the state government agency has used to endorse newly drawn “traditional” boundaries are any indication, there will be enough grants and secret bureaucrat business to keep those imbued with Indigenous “feeling and understanding” very busy and much-quoted for years to come. According to Aboriginal Victoria, this how one goes about re-defining a foggy heritage:

An account of that border-defining bushwalk appears at Aboriginal Victoria’s website beneath the heading “Grants, Funding and Training”. It can be read in full via the link below.

Dross in them thar hills