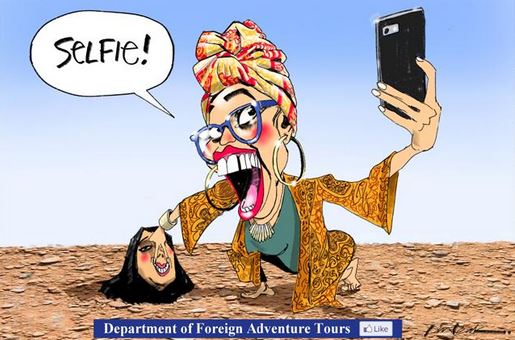 Death brings maggots and Bill Leak’s demise has been no exception to the rule. Within minutes of news breaking that he had been carried off by a massive heart attack at 61, the usual scum was floating in a froth of jubilation from the bottom of Twitter’s  cesspit. As experience tells us to expect, those who profess to care most about their fellow man are always eager to demonstrate just how very deeply they hate. Below, the first thoughts of creatures whose bylines you may know.

Read Eureka Street, underwritten by the Jesuits, and you realise they don’t make Jacks like they used to. Eureka Street (and ABC) favoured opinionator Fatima Measham

K Thor Jensen, an American with presumptions to being a cartoonist, decided to do some corpse-kicking from the other side of the Pacific. Check our Jensen’s cartooning to see why he might resent someone with talent

Sonia Nair, who once worked for the journalist’s union:

Fairfaxer Jenny Noyes, one of the Daily Life harpies,

It’s all there on Twitter, if you have the stomach to observe an onanists’ collective doing what they do best and most often.

Or you can follow the link below and read Mark Steyn’s tribute to a great man, Bill Leak.