A rising tide of soggy journalism 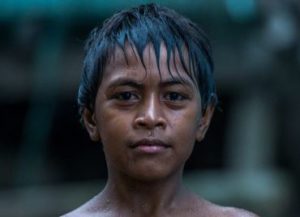 Traditionally, those on their death beds don’t leave to meet their Maker with a falsehood on the lips. Tradition, however, never took into account the likes of The Age (M-F sales down to 97,000), whose circulation and ad revenues suggest it would be nothing less than a miracle were it to see more than one more Christmas. It is a pity when a newspaper dies, but in the case of Melbourne’s shrunken broadsheet an exception can be made. When every fresh edition is a crime against fact, logic and grammar, no great loss really.

As an example of the newspaper’s worthlessness, consider yesterday’s pre-Paris prophecy that soggy masses of climate-change refugees will be heading our way any day now. You know the drill: rising seas, CO2, vanishing islands, selfishness of the developed world etc etc etc. That theme has been an alarmist staple ever since alarmism became a staple, and while no climate-change refugees have yet been sighted — not a single one — and the deadline for disaster keeps on being missed, the sheer volume of stories continues to mount.

The latest addition to the reeking pile comes from Fairfax’s Tom Arup and Adam Morton, who jetted about in carbon-spewing aircraft to detail the plight of young Micah Puia of the Solomon Islands, who is said to have spent “his whole life as a climate change refugee”. That’s him atop this post, and observe how, of all the mug shots the paper might have used, it opted for the one that captures the lad wringing wet.

As Fairfax has fired ever sub-editor who knew how to consult an atlas, the simple fact that the Solomon’s capital of Honiara, where Puia lives in a waterside shanty, is on the island of Guadacanal was not mentioned. That’s a pity, as the volcanic island’s highest point is the 2,300-metre peak of Mount Popomanaseu.

One would imagine there might be drier locations closer to home to which Puia could repair when — or more precisely if — those rising seas engulf the squatter settlement in which he now resides. But Arup and Morton weren’t done with the alarmism. While they somehow neglected to turn their gaze away from the sea and notice the towering range of mountains that form the island’s spine, they were full of news about Ontong Java, the atoll 400 kilometres to the north from which Puia came. According to the Age, which appears not to know the difference between Polynesians and Melanesians, Ontong Java is in danger of becoming uninhabitable.

That may well be the case but climate change would not seem to be a prime factor. Below are two illustrations. The first is an Admiralty chart of Ontong Java from long, long ago. Notice the shape, especially the fragmented line of islands to the west and the many apparent entrances to the lagoon. 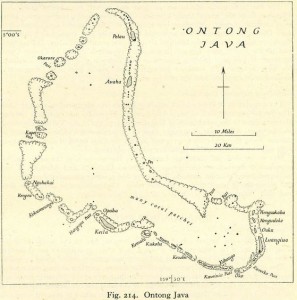 The next illustration is a recent satellite view of the same atoll, courtesy of Google Maps. 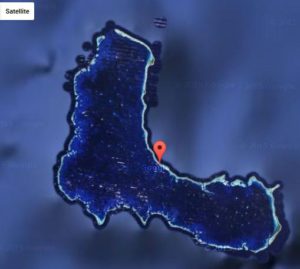 Contrast and compare. First, the atoll appears largely unchanged. King Neptune, to his credit, must not read The Age. And where there has been change it would seem to have been for the better. The white line about the perimeter is beach — and there seems to be more of it than when the Royal Navy cast its lead lines in the shallows.

Climate masochists who wish to read the Arup/Morton sermon in full can follow the link below. If you do, note the unexplored references in passing to overpopulation and environmental degradation as factors in Puia’s plight. That might have made an interesting story, but not when there is agenda to push.