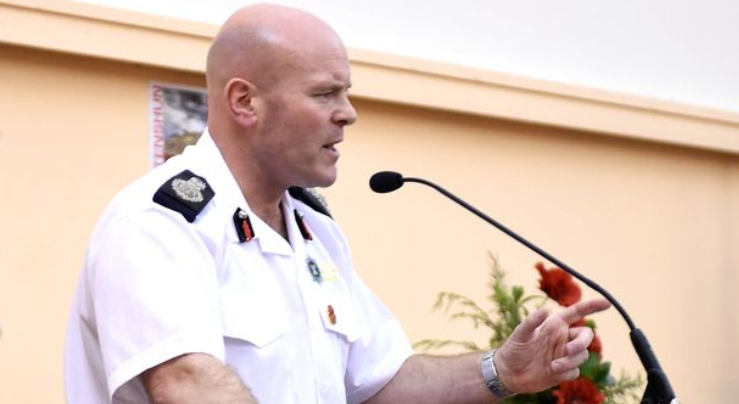 A fire, you might imagine, is a fire is a fire and best put out with dispatch when observed in what the centurions of modern public safety would inevitably describe as “inappropriate” locations. You know, like the curtains in a kitchen splattered with burning cooking oil. Ah, but things aren’t that simple these days, as Victoria’s newly recruited — but not yet officially announced — new Chief Fire Commissioner will be able to explain when he arrives in the City on the Yarra to take charge of the Metropolitan Fire Brigade.

News of Dan Stephens’ appointment was broken this morning in his hometown rag, the Liverpool Echo, before the government of Premier Dan Andrews bestirred itself to issue the requisite press releases. Or perhaps, just maybe, some glimmer of practical intelligence on Spring Street prompted the thought that it would be a good idea to equip Fireman Stephens (above) with a briefing paper on the unique approach to extinguishing flames in the Garden State. If that is indeed the case, he’ll have quite a bit of swotting before donning his antipodean red braces:

He will need to grasp, for instance, that the state government has just cut a ridiculously lucrative deal with (and for) the firefighters union, a staunch Andrews ally, and its members. So plush is the pact that simple logic suggests Victorians will likely see “efficiencies” imposed on the fire service in order to cover the stepped-up payroll for the unionists who work in its stations. No doubt Victoria’s recruiters made note of the fact that, while Liverpool’s brigade had its  budget cut by 11%, Mr Stephens retained the high esteem of its union, as the Echo reports. More than that, he is a dab hand at explaining “the least worst options” when fire stations need to be shut for reasons of economy. These cuts, just incidentally, prompted an interesting debate in the Westminster parliament.

He will need also to appreciate that the MFB has a less-than-stellar record when spending on big-ticket items. Take Glen Iris fire station, for example, which was thrown up at a cost of $5.5 million only to be immediately declared unfit to support the weight of the fire engines slated to be parked and based there.

Computer systems, too, have had their troubles, with the state’s Ombudsman revealing in a witheringly critical report how the MFB’s former IT chief made nepotism an art form by having her sons change their names in order to bag a pair of very-well-paid jobs. It was, according to the Ombudsman’s report, a subterfuge “so unlikely you could not make it up … a case of deception where the family nest was feathered pure and simple.”

On top of all that, he’ll be sliding down his fireman’s pole and straight into the middle of the Andrews government’s machinations to screw volunteer country firefighters in order to pleasure the Premier’s union mates and supporters.

Some things, however, the soon-to-be new commissioner already has down pat — the gobbledygook of officialese, for example,  as in a document  which purports to explain how Liverpool’s “diversity hiring policy” discriminates, via policy known as “Positive Action”  — not “positive discrimination”, mind you, never that! —  to make sure “people from previously excluded groups have the opportunity to compete on equal terms with other participants”. The categories of applicants to be encouraged are:

And readers, don’t forget to welcome the transsexual geriatric Zoroastrian dwarf in his third trimester who arrives to extinguish those kitchen curtains. She might even leave you with a local edition of the Manchester emergency services’ diversity calendar.

Manchester’s guidelines for hiring people to put out fires with a diverse flair can be read via this link or the one below.

UPDATE: It seems Stephens hasn’t gained the support of the United Firefighters Union, which has now “declared war” on Andrews & Co.

The unique thing about Victoria is that, just when you think things cannot get any loopier, they do.