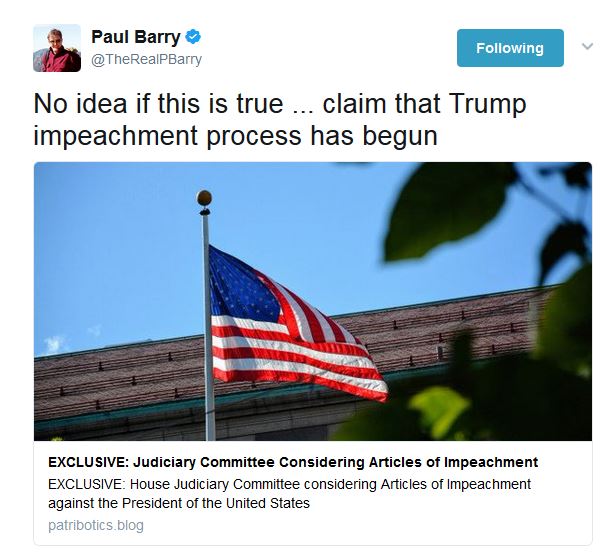 Many Quadrant readers who opened Twitter accounts quite likely don’t use them anymore, as it requires a particularly robust forebearance to endure the assaults and insults to which conservatives are subjected when logged on to social media. Still, enemy territory that it is, Twitter does serve a useful purpose in providing a billboard for those keen to advertise their hypocrisy and preciousness.

This morning’s twitterings by two purported priests in the temple of truth — take that to mean journalism and ABC journalists, and do try not to laugh — make that point rather nicely.

First, consider the tweet reproduced atop this item from Media Watch‘s Paul Barry, one of the few individuals on the planet who can make Jonathan “Mother Twanky” Holmes‘ departure from the small screen a cause for regret. Now bear in mind that Barry shtick is to take others to task for passing along fake news.

And what was the great man up to this morning? Why, passing along fake news! Actually, make that “old fake news” because the “impeachment” furphy had been refuted days earlier.

The next time some media outlet runs with a story on the strength of unsubstantiated and unchecked rumour (“Don’t know if this true”), consistency will bind Barry to overlook the offence. Once again, try not to laugh, especially if drinking coffee, as it may well make a mess of your keyboard.

The second cavalcader in this morning’s Silly Day parade is Barry’s fellow ABCer and host of The Drum, Ms Julia Baird, of whom it almost need not be noted that she also writes chin-strokers for the Sydney Morning Herald.  In the way of dogs, the ABC and Fairfax are joined nose-to-bottom, each addicted to inhaling and exhaling the other’s noxious slants and inaccuracies. It was her Saturday piece in the SMH which prompted Mark Latham’s derision as reproduced below.

Is she seriously suggesting that Latham will be to blame should some misguided soul make a physical attempt to jam a dose of common sense up her fundament? Apparently so.

Quadrant readers do not need to be told that Latham was speaking metaphorically — and one suspects Ms Baird understands as much as well. It is just that, rather than defend the compilation of only-women-bleed cliches that was her weekend column, she finds it so much more convenient to feign fear of physical assault.

We will know if that concern for her safety is genuine when she makes it a point at all future social gatherings to stand with her back to the wall, lest any skulking Lathamite have designs on embedding wisdom in “her clacker”.

Readers with a taste for irony might care to follow the link below and read Ms Baird’s column, which laments that women lack the confidence to defend their beliefs in open debate with nasty, icky men. And yet there she is, just a couple of days later, doing precisely that by seeking refuge in misrepresentation while refusing to argue her case.

Should Paul Barry retire to a rocking chair at the ABC Old Luvvies’ Home, Ms Baird’s inspired inconsistency makes her tailor-made to replace him.

A note to our
commenters

Not quite right after all