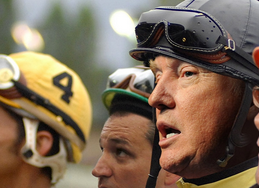 In Australia’s quiet corner of the world today’s big contest is the Melbourne Cup. Across the Pacific, where hours from now Americans will be voting in their country’s midterm elections, the field is more than somewhat larger and assessing form a good deal more difficult. As Republican senator Lindsey Graham observes in comments that apply just as much to Australia’s political handicappers, when the media has only one favourite and disparages the rest of the field, scorned runners can produce some surprises:

Well, one of the things we’ll learn from Kavanaugh is how in the tank the media really is for the other side.

I don’t think they’re the enemy of the people. They’re just allies of the Democratic Party. If a Republican had done to a Democratic nominee what they did to Kavanaugh, it would be front page news everywhere. If Barack Obama’s jobs numbers were anywhere close to what we’re talking about, they would stop the Earth from rotating to make sure everybody heard about it.

So the bottom line is it doesn’t work anymore. MSNBC and NBC have become one when it comes to the news cycle. Saturday Night Live is making fun of a guy who lost his eye in Afghanistan.

There is a backlash growing in this country from the over-the-top effort by the Left to portray everything conservative as bad and mean and un-American. And we’re going to show up at the polls in record numbers, and we’re going to kick their butt in the Senate, and I think the House is going to surprise people.

In any race, of course, much depends on the jockey — and here there is a big difference. Like or loathe him, it cannot be disputed that Donald Trump’s whip hand has flogged the issues that resonate with a large, perhaps a winning, section of the electorate.  He has pulled the US out of Paris, cut taxes, slashed green and red tape, closed borders, set out to revitalise America’s industrial base and, at every opportunity, stuck it to his Democratic foes and their media auxiliaries.

Less than 24 hours from now we’ll know if those riding instructions work as well for the GOP’s midterm candidates as they did in 2016’s presidential race.

The jockeys of Australian conservatism might want to take notes. Not that they will, of course.

For the latest analysis of the state of the American mind, follow this link or the one below to the Rasmussen polling outfit’s election-eve profile of the electorate’s passions, fears and intentions.

The constancy of Kevin Rudd