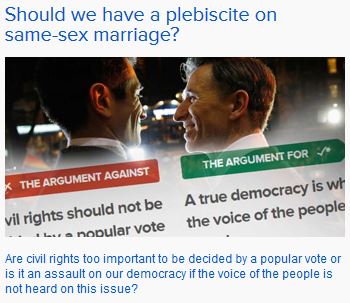 According to the ABC, which has cast a pink eye of PWC’s estimate of what a plebiscite on gay marriage will cost, the bill will come to a whopping $525 million. As with climate “science”, this figure is the result of modelling — and also like climate science isn’t worth a ledger full of red ink. Consider just one of the cost-inflating factors PWC’s super-smart modellers have incorporated in their estimate (emphasis added):

…[an] estimated 50,000 people — or about 5 per cent of the LGBTI community — would be negatively affected if a stand-alone plebiscite was conducted.

“What we find is the cost to the LGBTI community are in the order of $20 million for dealing with additional mental health costs that arise, just because of the stress and the public nature of the plebiscite,” [PWC’s Jeremy] Thorpe said.

The figure stems from the estimated cost to the health system and the loss of productivity in the workplace.

Silly as it is, that assertion does offer the hope of ongoing mortgage payments for professional warmists who have noticed a decided chill of late in the CSIRO’s willingness to underwrite legions of resident alarmists, among other cheerful developments.When the climate bubble goes ‘pop’, it may be that there is fresh work for homogenisers in calculating the costs to the economy should a careless baker place a spun-sugar heterosexual couple atop a rainbow wedding cake. If Mr Thorpe is on the money, Australia will not have known such hardship since the Great Depression.

The ABC report can be read in full via the link below — and do notice the poll question, reproduced atop this post. Do you get the feeling that ABCers might not be playing with a straight bat?

In a hole and digging

Hung out to dry
in the Big Apple