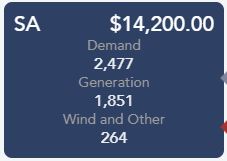 Misery loves company, as they say, so it is perhaps no surprise that South Australians are being reported as dead keen to see the rest of the country plagued by the darkness of blackouts, industries shuttering and consumers socked with electricity bills amongst the highest in the civilised world. Having commissioned a bit of push polling from the ever-reliable folks at ReachTel, the Climate Council wants you to know:

South Australian voters want to see the rest of Australia follow in the state’s clean energy footsteps, with new polling showing that 57.6% of respondents believe the rest of the country should switch to renewable energy and storage in the next 5 to 10 years.

The ReachTel poll, commissioned by the Climate Council, (conducted on the evening of Monday, January 29th) investigated South Australian attitudes towards the state’s leadership on renewable energy and storage, including the recent installation of the world’s largest lithium ion battery.

“These results show that no matter what the age, around 60% of people polled are proud of the state’s clean energy leadership,” he said.

Stock explained that South Australia is home to the highest proportion of solar and wind electricity in Australia, which is also among the highest in the world….

The Climate Council press release, available here or via the link below, invites comments from visitors to its site, so feel free to express your enthusiasm for power prices of the sort represented in the screen grab atop this post, not to mention Australia’s wider embrace of candles, dole cheques and large, undisclosed payments to FIFO peddlers of miraculous big batteries.