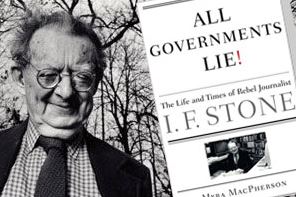 The late American journalist I.F. Stone (above) was an unashamed leftist and, quite likely, an agent of Soviet influence as well, but a source of valuable insight on some matters all the same. Take the way journalism is done, for instance, which he bemoaned as differing little from the relationship between cats and owners. The journalist gets fed a tidbit, a self-serving leak about this topic or that, and purrs with gratitude while going to press with the line his or her sponsor wishes to promote. If you want to get to the truth, Stone advised his bought-and-paid-for colleagues, don’t be a supplicant; rather, dig through government documents while keeping a sharp eye for contradictions and inconsistencies. Somewhere in there is the truth, but it will not be found while waiting to be petted and flattered by politicians using the press for their own ends. Stone died in 1989 but events in Canberra and at a Sydney radio station over the past 72 hours suggest his advice to be as relevant on this side of the Pacific today as in the Washington of the Sixties, era of the Pentagon Papers.

Briefly, the Sydney Morning Herald’s Jacqueline Maley wrote a column accusing the Prime Minister of “mansplaining”, a term currently enjoying immense popularity among cossetted, upper-middle class, arts-degree’d feminists — the sorts who take gross offence at a man’s blue tie but utter not a peep about young girls being brainwashed and bullied into cover-all sacks by the male-enforcers and patriarchal norms of a misogynist creed. This picayune and highly selective outrage amongst the media set is easy to understand. Hailing, say, Julia Gillard’s parliamentary rant about Tony Abbott’s alleged sexism as a defining moment in the fight for equality gets you in thick and sweet with a source. As that same source is also gung-ho for the alleged glories of multiculturalism and ethnic-bloc votes, best not to mention anything, not ever, about flaws in the doctrine of cultural relativism, as such an indiscretion might ruffle the relationship.  But complaining at length about a man’s tone of voice, that’s perfectly OK, especially if he is in the wrong party. Mansplaining happens, if you don’t know, when an XYer is subjectively perceived to be addressing his XX interlocutor as if she is a simpleton. Given that Maley is a representative specimen of the newsroom sisterhood, the real wonder is that we don’t see and hear a lot more mansplaining.

After the column appeared, 2GB’s Ben Fordham received a call from Malcolm Turnbull’s office urging him, by the radio host’s account, to drop a bucket on Maley for her “sexism”. Here it is difficult not to laugh out loud. Turnbull’s topic was negative gearing, but it was not the pros and cons of allowing property owners to write off losses on their investments — a right accruing to every other area of investment, just by the way — that sparked the synaptic connections between Maley’s brain and pen. There is an election coming, so tagging the Prime Minister with the same misogynist label that worked so well, spawned such a useful and pervasive meme against Abbott, is a no-risk  idea for any lazy essayist. No need to investigate the merit or otherwise of negative gearing. No need to sift fact from fancy. No need to do any legwork. Just settle at the keyboard for an hour or so, muster the right buzzwords, dress subjective appraisal as universal truth and — presto! — another picture byline, another few inches of column space filled. It’s great work if you can get it, work done and dusted until the next column requires its latest quota of patron-approved cliches to be wrangled into order and sequence.

This is part of the reason why it is worth following the link at the foot of this post, where you will find the audio of Fordham’s reaction.

He notes, for starters, that Turnbull has consistently refused invitations to appear on 2GB, quite likely because its listenership is not of the PM’s trendy stripe and he might well be informed by callers that he is not much liked by many in his party’s conservative base. This is the same base which Liberal pollster Mark Textor dismissed upon the Turnbull ascension as being of no consequence. The latest polls suggest he was mistaken — a thought that must by now also have occurred to the Fickle Fifty-Three who decided that, whatever few principles Turnbull believes in, they could believe in them as well if such a conversion might save their electoral necks.

Fordham’s second and greater point is that seeking a proxy with a microphone and 800-watt transmitter to whine about Maley’s “sexism” is itself a more potent indictment of the Turnbull style than any dubious, by-the-numbers complaint about the tone and emphasis of prime-ministerial diction. Not only does it accept as its premise that mansplaining is a valid criticism — though not of the PM, according to his whispering office elves — it also cedes the choice of battlefield and weapons to his opponent.

Follow the link below for the Fordham monologue. His criticisms of the Turnbullian operatives’ ineptitude becomes more pointed, and much harder to refute, as the rant proceeds. What Izzy Stone might have made of Jacqueline Maley-style journalism is anyone’s guess. What he would have said in praise of Fordham’s acumen and independence of thought is much easier to imagine.

A yearly shamefest (one of them)

Trust me, I’m a journalist