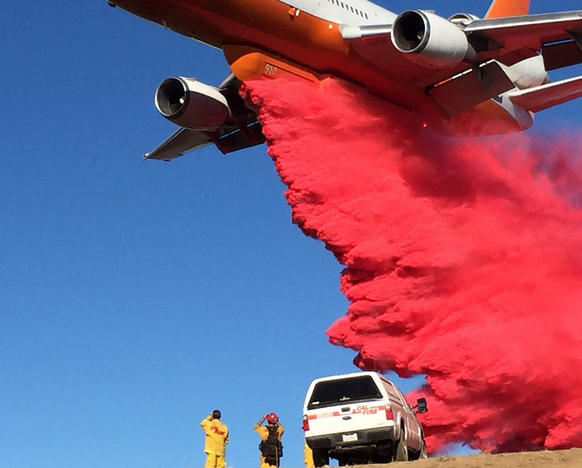 The ABC today reports that a fleet of the biggest water-bombing aircraft money can lease is on the way to Australia, albeit subject to a delay occasioned by what the national broadcaster describes in a semi-literate and hyperbolic headline as “international disasters”. These turn out to be winter snow in Canada, tornadoes in the American South and a restive Philippines volcano — none of which could reasonably be described as “unprecedented” or “a disaster”. But this is the ABC, where subeditors are evidently unaware of the relationship between subjects, verbs and objects. “Big water-bombing aircraft en route to Australia to fight fires delayed by international disasters”.

No, the fires weren’t delayed by “international disasters”, the planes were.

If you can’t get the grammar right, what hope of mastering recent history? None, one gathers by dipping  further into the ABC’s account of the alleged importance and utility of monster aeroplanes in subduing bushfires. These planes, the reader is informed via a quote from Richard Adler, general manager of the National Aerial Firefighting Centre (NAFC), will be deployed around the country “in rapid initial attack and to shorten the attack time.”

Here’s where a little background knowledge would have better served the ABC’s readers and listeners, because Mr Adler’s name rings bells with anyone who ten years ago followed the Black Saturday royal commission’s proceedings in Victoria. Back then, Mr Adler wasn’t too sure that jumbo bombers were of much use at all. Here is a summation of key parts of his testimony, courtesy of a Victorian Government submission, from the official record (emphasis added)

…there is an imperative to dispatch aircraft as quickly as possible. Under extreme conditions given the speed at which fires are building and the flight time of the aircraft to an incident, in all likelihood by the time an aircraft arrives it may be too late to succeed with first attack and the function of the aircraft will turn to asset protection. However, even though the first attack may fail, there are still parts of the fire, particularly the flanks where use of aircraft may be effective.

Mr Adler’s experience in relation to the Kilmore fire bears consideration. Mr Adler was based at Essendon airport with a Type 1 helicopter. Mr Adler gave evidence that by the time he arrived at the fire some 30 to 40 minutes flying time after dispatch it was not possible to directly attack the head of the fire and the aircraft was deployed into asset protection.

But those planes now preparing for their dash across the Pacific, they’re not choppers but high-speed jets. So they will get to the firefront in double-quick time and all the empire-building bureaucrats, the buck-passing politicians, the global warming barrow-pushers and an army of research-averse reporters will rejoice. Right?

In the Victorian royal commission’s findings and recommendations there is this:

There are practical constraints on using a very large air tanker in Victoria. Because of the weight and size of the DC-10, Avalon Airport (near Geelong) and Melbourne Airport (the main airport in Melbourne) are the only suitable air bases from which the aircraft can operate. The DC-10 requires a smaller lead plane to fly ahead and provide assessments before aerial firefighting. The DC-10 might also have limitations during poor weather. Once airborne, the aircraft must discharge its load of up to $45,000 worth of aerial suppressant to enable a safe landing. This has economic and environmental costs if the suppressant is not used on the fire and needs to be jettisoned.

The Commission notes that a number of witnesses were ambivalent about the very large air tanker.

NAFC General Manager Mr Richard Alder stated that, given its limitations and requirements for operating in Australia, the DC-10 may not be a cost-effective option …

Yes, the same Mr Adler who today has four planes on the way, ordered up by a Prime Minister anxious to demonstrate he is “doing something” to a press gang besotted in its ignorance by the notion that jumbo jets can get the better of, er, climate change (not forests turned into pyres by grossly inadequate fuel reduction)

The ABC story is a bit vague about how much the Inferno Air Force is costing, although the figure of $20 million rates a mention.

Just imagine how much additional hazard reduction could have been achieved with that tidy sum.

For more on the tragic mismanagement of the bush, bushfires and the usefulness of climate change in shifting responsibility for the current disaster from those who have once again let the country down, don’t miss Roger Underwood’s angry essay at left.

From Cologne to Central Station

Bravehearts of the left