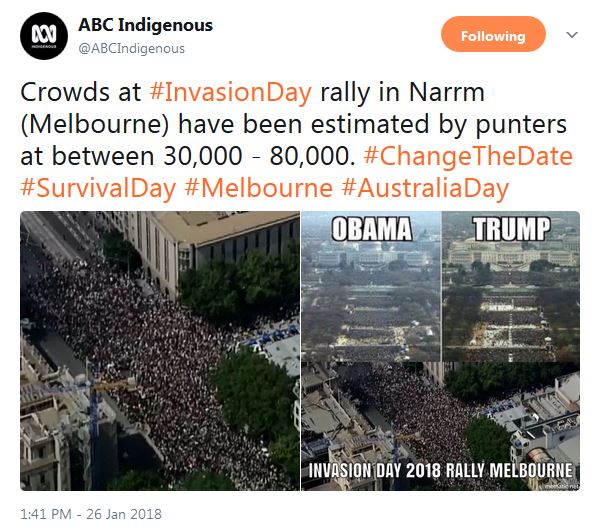 Yesterday, after blacktivist Tarneen Onus-Williams spoke “metaphorically” at Melbourne’s Invasion Day sook-a-thon about her desire to see Australia “burned to the ground”, the ABC was so overcome with enthusiasm for the cause that it just couldn’t stop itself. Like the trigger on a nuclear warhead, the rally appears to have detonated a mental explosion in the Indigenous unit that saw a critical mass of the national broadcaster’s pet issues and manias fused by the heat of unsupervised, taxpayer-funded activism and presented to the world as a single tweet (reproduced above).

This one has it all:

For those who can tolerate Twitter’s sewer, this link is worth bookmarking. It’s the ABC Indigenous unit’s stream of tweets and it illustrates two things. The first is a further taste of what Australians get for our mandatory $1.2 billion annual donation to the national broadcaster, which most will long ago have concluded isn’t much at all for such a vast sum.

Follow this link or the one below and watch very carefully from the 32-second mark the embedded video clip of interpretative dance confronting racist white hegemony. Apparently, in addition to wishing that Australia be “burned to the ground” (metaphorically, of course), there is another Western innovation the oppressed indigenes of the world can do without: underwear.

Hung out to dry
in the Big Apple

All the spin that’s fit to print