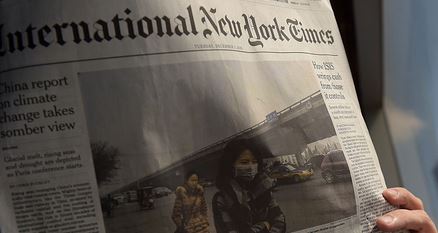 Fairfax Media, all but broke financially and beyond bankrupt journalistically, forks out an unknown sum to keep correspondent Paul “Hillary is a shoo-in” McGeough ensconced in Washington DC. One might wonder why the company indulges that expense, as his latest dispatch suggests strikingly similar copy can be picked up directly from the New York Times.

McGeough: Subsequent speculation among users of an online message board called 4Chan on the nature of possible links between the pizzeria and the Democratic Party meshed with insane theorising in the conservative blogosphere that Democrats are big on child trafficking; creating a supposed gospel truth, that then was picked up by an online page called The Donald; which, in turn, spawned a Reddit discussion thread called Pizzagate which, in the blink of an eye, had 20,000 subscribers.

Times: The 4Chan users immediately speculated about the links between Comet Ping Pong and the Democratic Party. Some posited the restaurant was part of a larger Democratic child trafficking ring, which was a theory long held by some conservative blogs. That idea jumped to other social media services such as Twitter and Reddit, where it gained momentum on the page “The_Donald.” A new Reddit discussion thread called “Pizzagate” quickly attracted 20,000 subscribers.

McGeough: Suddenly, the pizzeria came under attack. Among hundreds of threats on Instagram, Twitter and Facebook, Alefantis was warned, “we’re on to you”, “I will kill you personally”

Times: Within hours, menacing messages like “we’re on to you” began appearing in his Instagram feed. In the ensuing days, hundreds of death threats — one read “I will kill you personally” — started arriving via texts, Facebook and Twitter.

Times: Most troubling for Mr. Alefantis and staff has been the use of children’s images, pilfered from the restaurant’s social media pages and the personal accounts of friends who had “liked” Comet Ping Pong online.

McGeough:  Among reports on websites like The New Nationalist and The Vigilant Citizen, one headline read: “Pizzagate: How 4Chan Uncovered the Sick World of Washington’s Occult Elite.”

Times: … on websites such as The New Nationalist and The Vigilant Citizen, with one headline blaring: “Pizzagate: How 4Chan Uncovered the Sick World of Washington’s Occult Elite.”

McGeough’s report can be read via the link below.