Terrorism is just an irritation, said Fairfax Media’s house Muslim, Waleed Aly, whose first reaction was to blame the bombing of the Boston Marathon on white right-wingers. The Age and Sydney Morning Herald ran that asinine column, and there was never any doubt they wouldn’t. Reality, a disconcerting thing, requires a great effort of will to ignore, not to mention the vigilance needed to keep that tunnel vision focused nice and tight. But Fairfax manages to do just that, edition after predictable edition.

Only yesterday we had SMH Deputy Editor Ben Cubby magnanimously declaring “an amnesty” on climate deniers. Arrogant? Moronic? Yes, but also much more than that: such a column could only have been fermented in a toxic brew of abrogated journalistic principles and a nauseating sense of towering self-worth. Is it any wonder, on current circulation, that neither the Age nor Sydney Morning Herald is likely to see out the year just begun?

Now brace for the next ejaculations of po-mo idiocy. They’re coming sure as eggs, destined to dribble down the Fairfax papers’ shrunken pages as the usual suspect pretenders to coherent thought once again paper over the bloody handiwork of a murderous minority in our midst. They did it after 9/11 and Bali. They did it more recently when a jumbuk jihadi knifed two coppers in Melbourne, when Canada’s parliament was invaded, after Martin Place and, for an immoral certainty, they’ll do it all over again after this latest Islamic eruption in Paris.

Backlash, anyone? You’ll see those stories aplenty over the next few days because, well, the oppressed “otherness” of Muslims is what they teach at universities and you’re not going to work at Fairfax (or the ABC) if you can still make out the shape of the real world through that ever-shifting mist of vital, essential cliches. Do they have a computer program in the Fairfax content management system that generates apologia and excuses at the push of a button? No doubt about it.

And are those cliches essential or what!

How could it be possible to drive past a Lakemba bookstore — allowing, of course, that SMHers ever venture further west than Newtown — that happens to be doing a brisk business in Mein Kampf and The Protocols of the Elders of Zion and not feel, you know, just a little uncomfortable? How could it be possible for the harpies’ choir at Fairfax’s Daily Life site to go on (and on and on) about the Western world’s alleged “rape culture” while pointedly declining to notice the wholesale violation of women in the Middle East. It’s a handy thing, that selective blindness, an essential job qualification at a news organisation that is no longer anything of the sort.

But do you know what is even more handy than a newsroom-friendly inability to see the plain and obvious?

If you’re a sophisticated, inner-city solon with a degree from Wendy Bacon’s idea of a journalism school to prove it, what’s really handy is the protecti0n of tough men with guns.

That way, if you do give offence to the oh-so-easily offended, you’ll probably be able to make it home in one piece — relatively safe and smug as ever in the knowledge that the real world is being kept at bay by the sort of people you would never, ever invite to share a chardy. 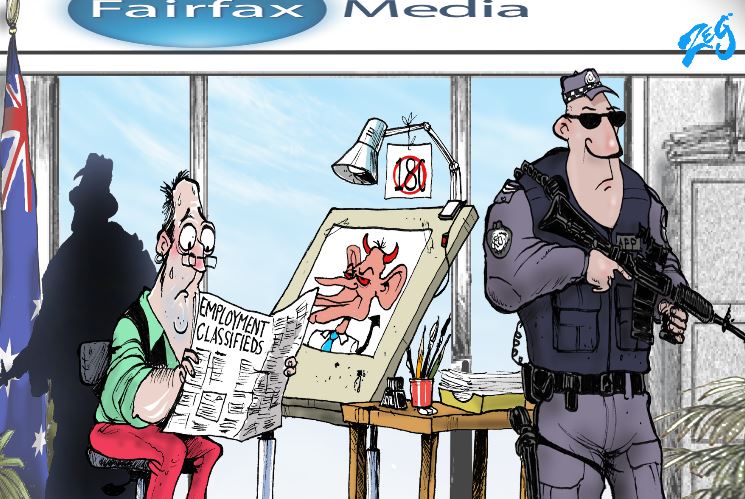 UPDATE: Just for the record — or not for the record, as it happens — the Sydney Morning Herald made no mention of the massacre in its next day’s edition. The Telegraph, by contrast, had it all over the front page. The simple obligation to report the news in a timely fashion is no longer observed at Fairfax. Unlike the trade in convenient pieties, making deadlines requires craft skills and commitment.

The Kurdish Antidote to ISIS

Hypocrisy on the campaign trail