The World According To Aunty 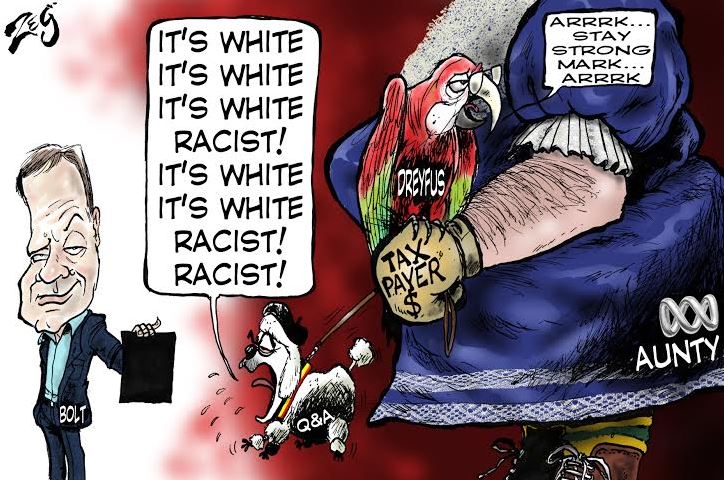 More of Bolt’s attempts to clear his name here. Below is the text of the columnist’s letter to Scott:

On your show last Monday, Marcia Langton made the following false claims:

– I was a “fool” who believed in “race theories”

– I had so hurt this woman she “withdrew from public life”.

All four claims are false and much of the evidence of that is [at this link]. It shows I did not do any of those things. Moreover, I believe in no such theories as Langton claimed, theories which she earlier explained in The Age were ideas of “racial hygiene” and the “master race”, as made infamous by the Nazis. Nor have I ever believed her colleague has no right to identity as Aboriginal.

Yet host Tony Jones during the discussion referred to Langton’s falsehoods as “those sort of facts” and invited guests to comment on them as if they were true.

I was devastated to have such things said of me, and to have the audience whipped up in this manner. The consequent jeering of me as a racist was clearly audible in your coverage. I deplore racism and am horrified to denounced and mocked as a racist on the national broadcaster.

Tonight on 2GB Marcia Langton apologised to me personally for those false claims, and refused to explain or defend them. She also apologised for her earlier defamatory comments defining what she calls my “racial theories”. She twice stated I was not a racist.

What Jones referred to as “these sorts of facts” are all falsehoods for which Langton has now apologised.

Here are the relevant parts of the transcript:

Langton apologises for her claims on Q&A on Monday:

BOLT:  Marcia, I want to summarise them. You said I heaped racial abuse on Misty Jenkins. False. You said that I questioned her right to identify as Aboriginal. False, because you can see the paragraph in front of you. I am sure you are looking – I wrote one paragraph about it and I’m sure you’re looking at it now and you can see it’s not true what you said. You said she was so traumatised she withdrew from public life. False. She’s very involved in public life. Everything you said was false and I’m wondering if I’m going to get an apology from you.

LANGTON: I will apologise to you.

BOLT:  I asked you why you made stuff up about me on Monday. You apologise, but you don’t actually say why you did it.

LANGTON: You won’t let me answer the question.

BOLT: I can’t tell you how hurt I was.

LANGTON: You won’t let me answer the question.

BOLT: All right. Answer it. Why did you make stuff up about me on Monday?

Langton apologises for saying three years ago that I believed in the “master race” and Nazi theories of “racial hygiene”:

LANGTON: Well, I do it now. Andrew, can I do it now? I apologise for saying that you believe in the master race. But let’s go to what you actually said…

LANGTON:  What I was explaining in that article is that there are concepts of race going around in our community. And one can interpret a lot of what you say as, ah, ah

BOLT:  Only if you’ve got a nasty disposition would you interpret what I think as being allied to Nazi thoughts of racial hygiene. It was a disgusting crack.

Langton admits I am not a racist:

On Monday’s show I want Tony to say that Langton has apologised for alleging I was a racist who’d racially abused one of her colleagues, argued she had no right call herself Aboriginal and had driven her from public life.  [I want him to say ] the ABC accepts that all these claims were false, and apologises unreservedly for broadcasting them. And, please, could the apology not be used as an excuse for another yes-but attack to add to the vilification you’ve broadcast already?

Can you inform me by 5pm on Friday, March 14, whether you intend to apologise?