Clouded Judgment and its Consequences

When the recorders of the Airbus A320-200 that was Flight QZ8510 are brought up from the shallow waters of the Java Sea, they will almost certainly prove that the aircraft was allowed to stall in the turbulence of a massive cumulonimbus thunderhead, and that the pilots failed to regain control as it spun, probably inverted, into the sea.

The data from the flight data recorder (FDR) and the cockpit voice recorder (CVR) will likely raise many awkward questions for AirAsia, the airline operator, plus the designers of modern passenger airliners and, of course, it will subject the competence of the doomed aircraft’s two pilots to piercing examination.

First, the facts as we know them so far:

The first question that presents itself is why this flight would plan a route directly in or through major thunderstorm activity with thunderheads as high as 44,000 feet. The answer probably lies in the economic rationality of a low-cost airline. Deviations from the direct route are costly in fuel and time, when an AirAsia ticket from Surabaya to Singapore costs only AU$87.

So it was not until the aircraft was at cruise level and confronting the storm that the captain requested a change in course to go over and around the worst of the weather.  The A320 is a relatively small and light airliner; by the time Jakarta ATC responded to the request, the plane probably was being thrown around in severe turbulence and the crew had its hands full, unable to acknowledge the now-approved diversion.

What experts will be looking for the flight data to explain is what happened in the next four minutes. If the public reports to emerge so far are correct, the plane went up thousands of feet, its speed dropping from around 820km/hr to 650km/hr. This indicates that it had been caught in extremely strong updraughts that are a feature of these tropical storms.

The critical question therefore is: what did the pilots do when they found themselves climbing rapidly, speed falling off, and the aircraft beginning to experience buffeting —  the first indication of a stall? Did they perhaps not distinguish between the buffeting and the severe turbulence of the storm?

In August, 2010, Airbus Industries carried out high-altitude stall tests, both in an A320 aircraft and on an A320 simulator, using four experienced pilots – French, British and Austrian. It was found that not one of the pilots was familiar with or recognised the high-speed (high Mach) buffet at high altitude. More seriously, the simulator did not adequately mimic the buffeting.

That experiment followed a complete revision of instructions on stall recovery in A320 and similar Airbus aircraft — a revison which reversed the previous advice.  As an official Airbus PowerPoint presentation in June, 2010, pointed out:

The traditional APPROACH TO STALL training is characterized by a controlled deceleration to stall warning, followed by a power recovery with minimum altitude loss.

When their stall warning sounded, pilots were trained to apply more – usually full TOGA (take-off, go-around) power, increasing thrust, oblivious to the fact that this was raising the nose, increasing the angle of the plane to the relative airflow (the AoA, angle of attack), and making the stall worse.

The new approach stressed that dealing with the AoA must come first. The nose of the aircraft must be pitched down, if necessary thrust (engine power) should be reduced, and the pilot should ensure the wings are level. Only when out of the stall should thrust be smoothly increased. Moreover, pilots should be alert to buffeting as a precursor to a stall.

It is surprising that this should have been seen as new and revolutionary thinking. Every student pilot learning recovery from stalls and spins in a single-engine aircraft is taught to first put the nose down to regain flying speed, thus increasing the smooth airflow over the wings that provides lift.

A modern passenger jet is stable and safe only so long as it is travelling forward at a sufficient speed.  Its narrow, swept-back wings are ideal for high-speed flight at high altitude, but their shape places their centre of lift, in line with the centre of  gravity, a long way aft (usually about half way down the passenger cabin). 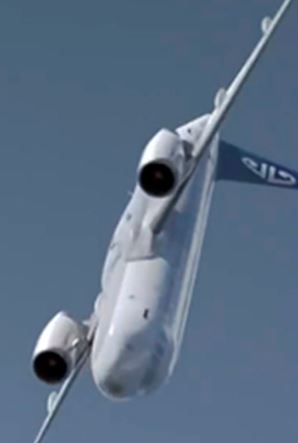 Since the aircraft rotates around the centre of gravity, and since these modern jetliners typically have under-slung engines, below the centre of gravity, increasing thrust will cause the nose to pitch up. This is what happened to an Air New Zealand A320 that crashed into the Mediterranean in November, 2008, – a crash that caused Airbus and other manufacturers to think again about stall-recovery technique.

At left is a frame from the popular cable-TV programme Air Crash Investigation’s recreation of the last seconds of that Air New Zealand airliner. When the pilots lost control, the plane rolled left, then 50 degrees right, then left again, its nose rose to a 19-degree angle, it banked right beyond the vertical and dived into the water at 263 knots (487 km/hour). The TV programme did not identify that the pilots’ use of full thrust when the plane was approaching the stall was wrong and contributed to the accident. It put the blame principally on the angle-of-attack sensors seizing up when water in them froze. At the end the crew relied too much on the perhaps too-clever computer-safety programs, failing to take control and fly the plane by hand.

Much the same thing happened to the Air France A330 Airbus AF447 lost in mid-Atlantic in June, 2009. In that crash, icing froze the pitot heads and resulted in false speed readings. The final report by France’s BEA (Bureau d’Enquêtes et d’Analyses) found the pilots had become bamboozled. They had neither recognised the buffeting nor heeded the stall warnings and, as a consequence, had pulled back on the stick, causing the aircraft to climb rapidly, worsening the situation until the stall and plunge into the Atlantic became inevitable.

The similarity between those two accidents and whatwe can reasonably surmise about loss of QZ8510 is striking. I believe that analysis of the AirAsia jetliner’s flight data, possibly confirmed by cockpit conversations recorded in those crucial moments, will show that the A320 stalled at around 36,000 feet, and that the pilots failed to apply the recommended Airbus recovery technique. As in the Air France crash, they may have been overcome by what the BEA identified as the “startle factor” – they found themselves suddenly disoriented, uncertain about the attitude of the aircraft, and nonplused as to what corrective actions were required.

The AF447 pilots were flying in pitch darkness. The Air Asia plane although in daylight, would have been in thick cloud with no horizon as a visual reference. It is in emergencies under these conditions that the techniques of crew resource management (CRM) become vitally important. First developed by NASA and now adopted by most modern airlines, CRM stresses teamwork. It imposes a clear definition of duties of both pilots, the need for co-operation in solving problems, and emphasizes the freedom to respectfully question authority.

Several serious accidents have been traced to the inability of junior pilots to challenge the decisions of his captain, or for the senior pilot to disregard the concerns of his junior. It will be interesting to learn from the crash investigation whether AirAsia has adopted CRM policy, and if so, from the voice recordings whether a breakdown of communications between the relatively inexperienced (foreign) French pilot and Indonesian Captain Iriyanto had any part to play in an accident that, even at this early stage, will strike many seasoned pilots as bearing the hallmarks of pilot error.

Geoffrey Luck, a veteran pilot, was an ABC journalist from 1950 until 1976. In January, 2014, he recalled how a combination of inexperience and power lines very nearly cost him his life.