As a retired doctor I need no longer be alert for medical emergencies, constantly on the look-out for heroic opportunities to demonstrate my professionalism, compassion, empathy and beneficence. This frees me to observe peculiar foreign customs, the strangest of which often pertain to toilet traditions and/or etiquette. With tongue only partly embedded in cheek, let me say there seems a compelling need for travellers’ handbook, especially for those who unwisely combine diuretics and laxatives close to boarding time.

What follows is a brief guide to appeasing nature’s needs in various corners of the world. As many Quadrant readers will be toting suitcases and braving gastric irregularities in exotic locations at this time of the year, I offer my insights as both a public service and a no-stress way of continuing my medico’s obligation to ease suffering where ever encountered.

Indonesians promote peace of mind by means of peeing with tropical fish. In Denpasar’s airport male toilet one stands at the urinal looking at an aquarium built into the wall at the eye level. I don’t know what the other passengers thought of this worthy contribution to the relaxation of a weary traveller’s urinary sphincters, but I was delighted to observe the beautiful, multi-hued specimens and their absolute indifference to the peeing public.  It is almost possible to forget about benign prostatic hypertrophy (enlarged prostate)  and enjoy a leisurely dribble in such company; fish do not mind you looking at them longer than other humans similarly preoccupied might deem socially appropriate.

The pacific influence of those happy fish almost erases the memory of what might have been an embarrassing moment, perhaps even an international incident. The polite expression for a toilet in Bahasa Indonesia is kamar kecil. I always put a little effort into learning a vital word or two of the local language, but in Indonesia my memory failed me. Somewhat confused, I asked for the directions to the nearest musholla. While no doubt puzzled by the evident urgency of the query, my puzzled interlocutor directed me with alacrity. Following his instructions, I found myself standing before a prayer room where Muslim men can observe their obligation to pray five times a day. The truth dawned before there was any need for consular legal support or pleas formercy on my behalf by the Australian foreign minister of the day.

In the Ukrainian city of Odessa the locals go for a healthy dose of a sarcasm. The sign above the urinal may very well say, “Do not flatter yourself, stand closer”.  The same wry attitude prevails on public transport. In other cities around the world you will see signs advising you, in the interests of reducing the incidence of decapitation, not to stick your head out the window. In Odessa the signs urge you to experiment, “Go ahead,” they suggest, “stick it out. Let’s see what  happens.”

In far-north Queensland, the Kuranda toilet has a beautifully laid-out mosaic floor that proclaims, having seen the town, visitors can die happy and fulfilled. Modest to a fault are the Kurandians, although I suspect the grandiose message may be a relic of the days when Kuranda was a small bohemian village with plenty of inebriated and stoned residents. I have heard a rumour that it remains possible to obtain a magic mushroom confection for dessert, but am disinclined to learn if there is any truth to that whisper. The tile work in the public toilet was thrill enough.

In Vienna nothing is explained — a significant oversight, given that the cubicle doors in some public toilets will not open to let you out until the bowl has been flushed, no matter how much you bang and pull and pound. There are harrowing tales of desperate tourists from countries with less refined toilet traditions missing their departures because, poor devils, they did not grasp the unwritten golden rule.

In Tokyo, railway toilets encourage customers to contemplate the meaning of life, the benefits of modern technology and and other uplifting influences, coming equipped with music and electrically warmed toilet seats, plus innovations that wash and dry the user’s difficult-to-access nooks and crannies. Tokens of goodwill bequeathed by previous users are apt to be evident and ample. You will find plenty of reading material, including bound and stapled examples of Japan’s highly idiosyncratic tastes in pornography. And in some Tokyo toilets (below) you can even share literature with a friend. 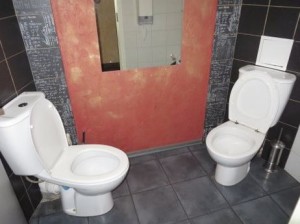 In America they stick to the bare and pragmatic essentials, which helps to sustain a needed attitude of constant vigilance, as public toilets are favourite haunts of pickpockets and under-the-partition handbag riflers. Picture, if you will, the concentration required to hitch your trousers and watch your wallet while ignoring the constant distraction of the attendant’s Brooklyn-accented and never-ending mantra: “Move it along, folks. Move it, please, move it. Others are waiting.”

Chinese public toilets, while basic (a hole in the floor is typical) are hotbeds of a gossip, discussion and, disconcertingly, comparison.  The Chinese perception of privacy is, um, different from the Western concepot, so cubicle doors are virtually nonexistent. It is not uncommon for a foreigner to be actively and unashamedly stared by poses of locals while attending to bodily needs. This enthusiasm for group observation and discussion appears to be conducted for the near-scientific purpose of discovering any anatomical differences between the Caucasians and Chinese anatomy. Such inspections can be quite unnerving, but such is the level of interest that even an angry scream would be unlikely to entirely suppress local curiosity.

Some of the most unhygienic toilets I have encountered were in Russia, where the seasoned traveller should arrive equipped with

In Israel, public toilets are an interesting combination of public libraries and debating clubs. Imagine a row of closed cubicles, all occupied. From every one comes the rustle of newspapers being avidly read and loudly commented upon. A heated and highly personalised discussion may well erupt. Expect it to be replete with repeated references to the dismal moral qualities of the dissenter and comparisons of his appearance and intellect with the local fauna, mostly donkeys and dogs. Such debates can sometimes involve all cubicles, with participants not at all discouraged that they cannot see their opponents. Opinions bouncing off the tiles are expressed freely, loudly  and emotionally.

Well, dear reader, let this missive serve as a reminder that variety will always be the spice of life and a humble toilet is as good a place as any, and better than most, to be reminded of both the differences and similarities that mark us the world over as Homo Sapiens. So happy travels to you all, especially if you can find a clean and functioning toilet when and where you need it.