In July, 1978, I happened to be in Brisbane, reporting an economics conference for The Age. The Friday session was dull and the Saturday program looked no better. On the Saturday morning I suspected my Brisbane trip was a waste of time.

From my hotel room, however, I noticed in a side street something more interesting than economics academics bolstering their research citations. The side street was head to tail with police buses, and the buses were packed with Queensland police. What’s all this about?

I went outside and followed people to nearby King George Square. There a women’s rights rally was warming up. About 100 women were active in the square, watched by an audience of 100-200. The surprising thing was the extent of the police presence – I estimated well over 300 of them, outnumbering the meeting itself. The other police in the buses were in reserve.

I recalled how Brisbane for more than a year had been embroiled in controversy over the right to march in the street. Premier Joh Bjelke-Petersen had banned street protest marches in Brisbane, although he did not ban peaceful meetings in St George’s Square. “Protest groups need not bother applying for permits to stage marches – because they won’t be granted,” he said. He steamrollered the legislation through the State Parliament in less than one day.

Subsequently, more than 1,700 people were arrested for demonstrating or marching (or being in the wrong place at the wrong time). It was nothing unusual for 1000 police to be mustered for a day to maintain vigilance against a prospective march or protest. Further south, in Sydney and Melbourne, political marches continued to be a normal aspect of city life, usually with the good-humored cooperation of traffic and other police.

So here was in Brisbane, in the eye of the cyclone. No, scrub that metaphor — the eye of a cyclone is calm. I was, well, in Brisbane, which was then an alien land where a Premier and his police commissioner ran the show. (The commissioner, Sir Terry Lewis, was later gaoled, but I’m getting ahead of my story).

The meeting in the square was not a ‘march’, and technically it was not breaking any Queensland law. To entertain the onlookers, some of the women activists were staging a street-theatre. Six women each adopted the role of a female virtue and stood in a rubbish bin reciting some doggerel or song. 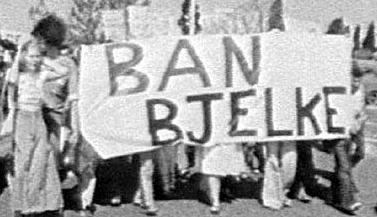 One of the women, playing “Prudence”, recited a ditty that included the word “f***”. Brisbane police were so shocked that they barged into the group and hauled Prudence out of her rubbish bin and carted her across to a paddy wagon parked half a block away. In this way they showed their  sensitivity to coarse language.

The arrest of Prudence inspired her sisterhood to have another go. They sang a song that also included the word “f***”, and the police again waded in for the arrests. As I described it for The Age…

I followed one arrested girl to the paddy wagon. The policeman had her right arm in some sort of lock as he marched her away, and he kept the lock on while queueing for the charge sheet and photograph.

The women speakers were in high dudgeon about the arrests over the word “f***”. One speaker said the police had called her a whore and a slut. Another said she had been called a black bitch; she wasn’t black but it made her ashamed to be white, she said stoutly. Another young woman took the mike and made what I considered to be the speech of the day:

“One of my friends was just arrested, maybe because she looked a bit butch. But if she’s in jail, that’s where I want to be.” She paused, amid cheers. “They should do something about their f***ing system.”

They came in and got her. But the atmosphere became humorous. She walked off grinning, with just a police hand on her arm, and at the paddy wagon a policeman said, “You got your wish” and she laughed. When they photographed her, she raised her fist…

What I didn’t say in my Age piece, was that shortly after, a big high-ranking policeman approached me and threatened to arrest me for ‘obstructing police’. I was amazed. I was standing 30 metres down the street from the paddy wagon, and the nearest police person was 20 metres or so distant. I was not communicating with anyone, just watching on a near deserted bit of street, listening and taking notes. I wondered, if I were to be arrested, what tall tales would the police witness tell the magistrate to justify my conviction. Nonetheless, it was not my job to get arrested, rightly or wrongly, so I moved out of view of the paddy wagon and back to the meeting.

I finished my article with,

“There’s nothing funny about Mr Bjelke-Petersen and the police force he uses. Democracy in Queensland is less safe than the average citizen down South would imagine.”

There was plenty more back-story to my Saturday in Brisbane than what I wrote for The Age. Here goes:

The police kept arresting the women on one charge or another, till only a rump of players and audience was left. This rump then decided to walk to the city watch-house and give some moral support to their sisters within it.

I was still smarting from the way the police had tried to frame me. I couldn’t help identifying with the women,  rather than with the police, or neither. (I suspect that in reporting civil disobedience, reporters sometimes implicitly identify with the police, hob-nobbing with the police spokesperson and hurrying along to any press conference the police call during the day. Other times they identify with protesters, as when they write breathless copy like “Hundreds of thousands of angry protestors made a sea of color as they flooded down Bourke Street. Mothers wheeling prams shook their fists exultantly in support of (the politically-correct cause of the day).”

My case was unusual. I was in the capital city of a democratic but corrupt state government. This government was undemocratically suppressing dissent by arresting citizens for no good reason, and threatening to arrest a completely law-abiding reporter who was not obeying the unwritten rules about how to report events in Brisbane.

I figured that the best way to witness any police violence or misbehavior was to be as close to the demonstrators as possible. When they sat down on the grass outside the watch-house, I sat down with them, chatting and taking notes. They were singing songs of solidarity with the women inside the walls. Eventually the drama petered out.

I went back to the hotel and composed and filed my story for Monday’s Age, leaving out how the police had threatened me. It was a difficult article to write, partly because I had no access to research (this was long before Google),  partly because I was trying to be objective and indignant at the same time, and particularly because The Age was definitely not prone to printing the word “F***” except as, perhaps, f–k.*

Next day in Brisbane I got a call from the night editor, Peter Cole-Adams. He wanted to print the story but had already received a call from a senior Brisbane police executive (I think a deputy to the Commissioner or the media liaison person) warning that anything I wrote should be viewed by The Age with suspicion because the author Tony Thomas had himself been taking part in the demonstration he was writing about. And the police had photos to prove it.

It was the ‘photos to prove it’ that spooked night-editor Peter. He hadn’t seen them, and if they were produced after the article appeared, and incriminated me, The Age’s reputation would suffer. So he asked me, “Were you taking part or doing anything the police could photograph and embarrass us? Think carefully because if you mislead us about this, your employment is at stake.”

I gulped. What photos? No, there could be nothing incriminating. I had just done my job. But being media-savvy, I knew that photos can often lie. Maybe they had a photo of me about to pick my nose, and it looked as though I was giving the finger to the police? I had to take that risk. No, I said, there was nothing I did that constituted taking part in the demo. “Well,” Peter said, ”you’d better be right, and by the way, we’re going to print the word “F***” where you’ve written it.”

Actually, The Age had printed the word “f***” once before, but it must have been in another highly-exceptional instance.

I wondered for years about the police photos of me. By a coincidence, our chief political reporter, Michelle Grattan, one day remarked to me that she had some photos I would be interested in. She had been handed them by the Queensland police media person. They were of good professional quality, blown up to about A4 size, and showed me sitting on the lawn outside the watch-house, in company with the protestors. It had been taken when I was interviewing them and waiting for any police violence or provocation to occur. I was not displaying any activist tendencies.

Among the readership of my feature was my own father, Pete, who excerpted it in his own 60-page political booklet on the street-march ban, titled “No! No! to Joh!” Pending a trip to the State Library to look up The Age original, I’ve been drawing on Pete’s booklet now myself, creating a son-father-son loop.

Regarding Sir Joh, I was quite surprised to find my experience was not uncommon. Wiki has a section on Joh and the media: “Journalists covering industrial disputes and picketing, were afraid of arrest. Some journalists experienced police harassment.”

“The greatest thing that could happen to the state and nation is when we get rid of all the media… then we could live in peace and tranquility and no one would know anything.”

Perhaps he was joking.

Lewis in August, 1991, was convicted on 15 counts of corruption.

The jury found that Lewis had accepted bribes totalling more than $600,000 to protect brothels, SP bookmakers, illegal casinos and operators of illegal gambling machines. Judge Tony Healy gave him the maximum 14 years and Lewis was released, minus knighthood, in 2002 after serving ten years.

During Joh’s 1991 trial for perjury (he was acquitted), his  former police Special Branch bodyguard, Sergeant Bob Carter, claimed that in 1986 he (Carter) had been  given two packages of cash totalling $210,000 in Joh’s office from a property developer.

Editor’s note: The Age’s former reservations about printing the “f word” in full remain in effect at Quadrant Online, where slippery slopes are recognised as such. The Age, once a serious newspaper, now uses its website to promote a columnist’s line of “F*** Abbott” T-shirts. Peter-Cole Adams and the real journalists who once occupied its Spencer Street desks must wonder what parallel universe they are witnessing.

Tony Thomas apologises for so many “f***s” in this article. His collected essays can be found here.