Curse you, orgasmologist Shere Hite! I wish my  (verbal) intercourse with you  at Canberra’s National Press Club had never occurred! But regrets are vain: someone long ago did a poem about the “moving finger” moving on, and nothing can lure it back.

At the time I was a young and naïve reporter, Press Gallery-based and aged 38. I had a title: “Economics Writer” for The Age.

A title is a precious thing. Later, I was an “Associate Editor” at BRW Magazine, but no-one knew why or what it meant. The reality was that another reporter was promoted to associate editor and I was awarded the same title in case I felt miffed.

At The Age, my title was often mis-stated by sub-editors as “Economic Writer”, as though I was a bargain or – implausibly – sparing with words.

In fact I was just a poor-man’s Kenneth Davidson, he being The Age’s (drum-roll!) current “Economics Editor”.

We can’t all be top dog. I did feel my title “Economics Writer” had gravitas.

Imagine my annoyance when gonzo journalist Mungo MacCallum (left) began referring to me in the now-extinct tabloid Nation Review as “Tony Thomas, The Age’s non-masturbating Economics Writer”. You may say, “What’s wrong with that? It could be worse.”  Well, yes it could. But when I predicted a half-percent rise in official interest rates, I didn’t want this portentous forecast marred by gratuitous, albeit complimentary, personal detail. Worse, I had no-one to thank but myself for Mungo’s soubriquet. 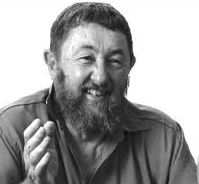 The years have rolled by, but I still owe readers of both the Nation Review and The Age this explanation:

I was treasurer of the Press Club for several years (another title with gravitas, although I seldom got spending and receipts to balance). Our main activity was organizing big-shot lunchtime speakers every few weeks, giving celebs the benefit of a national forum.

I felt an obligation to enliven the question times, which were often ponderous,  with some pre-planned witticisms. In any event I enjoyed showing off, especially in high-level company such as the Shahanshah of Iran, Maggie Thatcher and Jim Cairns.

To give you the idea, man-of-the-world Peter Ustinov was one of our speakers, and I went to some care to feed him a good question: 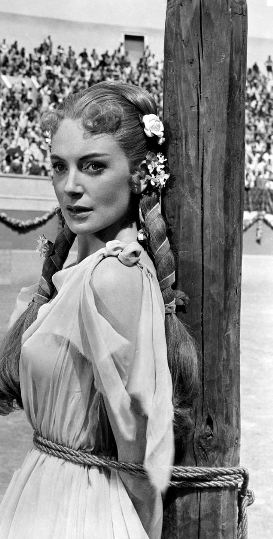 Me: When I was about 11, I went to see Quo Vadis, in which you played Nero, very brilliantly. I loved the scene where Deborah Kerr was tied to the stake, clad in diaphanous garments, and all set to be gored by a big black bull. Then, as you in Rome fiddled, so in the cinema seat did one small boy…

Ustinov (before I could even ask my pro forma question): My dear boy, you were the only person who really understood that scene!

He added that he had asked the director of Quo Vadis, Mervyn LeRoy, for any special insights into Nero’s motivations.

"He’s a guy plays with himself nights."

Ustinov went on to explain that the "bull" from which the hulking slave Ursus saved Deborah Kerr, was actually a chloroformed cow, filmed so as to keep the udder out of shot.[i] Ursus had to twist the cow’s neck, which woke the cow: “Every time Ursus put his foot on the carcass to symbolize his victory, the cow would look up and moo pathetically.”[ii]

Someone asked him about the lions. He said there were 120 of them on the cast list, but they refused to act their parts as Christian-killers, something to do with their dislike of bright lighting. Eventually the lion-tamers organized human dummies stuffed with meat, which the lions did get stuck into, but too horrifically to make the final edit, he said.

I came away realising that Peter Ustinov was not easily upstaged.

None of the above clarifies why I became “The Age’s non-masturbating Economics Writer”; it may even raise more questions than it answers. Am I unconsciously dodging proper disclosure? Let me screw my courage to the sticking place and try harder.

Someone lined up Shere Hite as our Press Club speaker for April 19, 1978. She is often described as a “clitorologist”. She argues that direct stimulus to that organ beats penile intercourse as a route (or should I say, “highway”) to orgasm.[iii]

As Hite got down to the nitty-gritty, people either forgot their roast chicken  or subjected it to minute inspection and small forkfuls. The un-ease was palpable, especially when Hite began gesturing elaborately with her right middle finger to indicate her favorite style of clitoral stimulation.

For form’s sake, I began a question on female fantasies, but it was drowned out in the roar from the room. People had been way out of their comfort zone.  The tensions of the past half hour’s tutorial on ladies’ solo fulfillment now dissolved into ribald laughter. 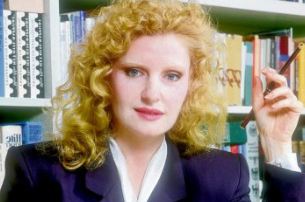 When the racket died down, Shere (above) responded, in character:

In the audience was  Mungo MacCallum, who specialized in outrageous prose (now many do, but he was a local pioneer).

I had caused him recent offence  over a silly incident, the insolence of office, when I was wearing my ‘Treasurer’ hat. He came into The Age’s gallery cubby-hole to put himself down as a "maybe" for a Press Club lunch. Since I had to manage the numbers and capacity, I told him he couldn’t register as a “maybe”, only as “yes”. I was cranky about too many "maybe" applicants and ended his expostulations by physically pushing him out the door. I should have apologised but life moved on, so I apologise now, 35 years in arrears.

Anyway, Mungo then pinned on me the descriptor: “Tony Thomas, The Age’s non-masturbating Economics Writer…”

I rang Mungo this week to see if anyone had ever asked why he had referred to me that way.

“As opposed to [name of famed Age colleague deleted]?”[v]

“Well I’d forgotten the whole thing. It disappeared into the mists of time. No, I don’t think anyone ever asked.”

An ugly thought crosses my mind: maybe no-one was reading me OR Mungo.

Tony Thomas writes for Quadrant. His private life is actually none of your business.

[i] “Ursus” is Latin for bear. The actor playing Ursus was Buddy Baer. Spooky!

[ii] This was before the politically correct apologia, “No animals were hurt in the making of this film”, began appearing in the end-credits.

[iii] As her official website biog puts it: “In 1976, a young grad student from Missouri dropped a bombshell into the bedrooms of the world, and blew apart our preconceptions about women’s sexuality.”

[iv] I had picked up this bon mot from our worldly bureau chief, the late Allan Barnes, in a  less-erudite context.

The comrade from the newsroom