Freedom ride ’round the Potomac

Washington DC, July 9: The Americans are a bit in-your-face with all this free speech/freedom-of-the-press stuff. Back in Australia we’re over that.

The American obsession is at its most blatant at the Washington DC “Newseum” (i.e. News Museum) on Pennsylvania Avenue, where there’s a marble tablet 74 feet tall engraved with nothing more than the 45 words of the First Amendment. The bit that the Newseum is most interested in is: "Congress shall make no law … abridging the freedom of speech, or of the press."

My landlady’s place is in M-Street South-West. This morning, starting early to escape yet another century, I took a public bike from across the road and set off around the Tidal Basin of the Potomac, barely a mile away. Goal: to study this American free-speech idiosyncrasy.

This is one of the many neo-classical efforts in this town, all pillars and porticos and rotundas and domes. In yesteryear the monument was damned as a "tired architectural lie" but it’s dignified all the same, especially as it looks directly north across the water to the White House.

Among the engraved excerpts inside from Jefferson’s works is this:

Almighty God hath created the mind free … All attempts to influence it by temporal punishments or burthens … are a departure from the plan of the Holy Author of our religion.

Jefferson was quite obsessive. In the Newseum there’s another of his bon mots: "If it were left to me to decide whether we should have a government without a free press or a free press without a government, I would prefer the latter."   Ridiculous! In the real world, who could object to our own government’s plans for a fair and balanced press?

My bike tour continued clockwise through the cherry trees to the Roosevelt Memorial,

a modern work covering a huge 7.5 acres. It has four "outdoor rooms" of imagery and symbolism involving his four terms. The main statue has him shrouded in a cloak so you can’t tell that he’s in his wheelchair. This got the lobbies for the handicapped so annoyed that another statue of him, definitely in a wheelchair, was added a few years later.

One of the focal points here is a granite block, with the Four Freedoms chiselled into it. Freedoms 2, 3 and 4 are freedoms of worship, freedom from want, and freedom from fear.

Annoyingly, the first freedom listed is "Freedom of Speech."

My next monument around the basin was a surprise, because it was opened only a year ago and it’s not even on my map. This is the Martin Luther King memorial – a no-bike zone but I took a chance that it only meant no-bike-riding. I wheeled my bike through the gap in the two big rocks comprising the "Mountain of Despair" and came to the carving of King representing the "Stone of Hope" [left]. 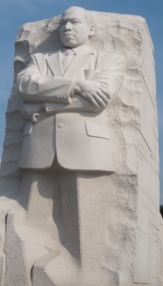 There were a lot of black people there — Black Pride is manifest everywhere in Obama’s capital — and they didn’t seem to mind my bike. (The mountain and stone references are from King’s "I have a dream" speech: "Out of a mountain of despair, a stone of hope").

There’s nothing on the long wall of his quotations that involves freedom of speech and the press, but I did notice his "passionate desire to see our beloved country stand as a moral example to the world." I was proud that Australia is setting "a moral example to the world" with our carbon tax, in keeping with the high moral standards at the apex of our current political life.

From there I got lost among the loops around the Washington obelisk, the incredible 555ft stone spire that’s the icon of this capital. Eventually I found myself in the sunken "V" constituting the Vietnam Memorial Wall, which I can’t really fit into my story. But as a by-the-way, the ranger on duty told me that Maya Ying Lin, who designed this memorial as an 21-year-old undergraduate at Yale, got a B grade from her architecture professor because the design was too simple. Like most good stories (except mine), that one may not be true.

From there I pedalled down the Mall to the Newseum, experiencing first-hand an "urban heat island" effect as the city centre cooked up.

The seven-level $US450m Newseum, opened in 2008, has about the same prominence as the Smithsonian museums along the mall, and its mission is "educating the public about the value of a free press in a free society."

The main funder, tipping in $US100m, was the Freedom Forum, "a non-partisan foundation that champions the First Amendment as a cornerstone of democracy." It is some sort of descendant of a foundation set up pre-war by publisher tycoon Frank E. Gannett. A sinister co-funder ($US10m) was News Corporation. In horrid capitalist mode, the Newseum charged me $US20 admission (the Smithsonians are free).

It displays the history of the press and media, has a whole gallery on just the First Amendment, and special displays on things like FBI/Press relationships, Pulitzer-winning sport pictures, TV and radio coverage of the Twin Towers disaster (which had me choking off tears), and the Berlin Wall.

As background activity, it highlights events bearing on press freedom. The latest is somewhat prosaic: Last June 29, the Supreme Court said CBS television wouldn’t have to pay the $US550,000 fine levied by the Federal Communications Commission over the wardrobe malfunction of Janet Jackson at the 2004 Super Bowl (no relation to our Prime Minister’s Hyper Bowl). The court’s reasoning was that the nipple only peeped momentarily. But it warned that any future wardrobe malfunctions on TV can be and should be dealt with by the full majesty of the law.

One view of the Newseum concerns bias in the media. It says that under the First Amendment, newspapers and magazines "can publish information as they see fit, biased or not. If published information is libellous, the publication can be sued by the person claiming to be libelled. But the Federal Government does not and can not regulate newspaper content." Another tablet records how US television stations used to have a government-imposed “fairness doctrine” requiring balanced coverage, but this was repealed in 1987 to give them the same freedom to be biased that the US press has always had.

My freedom ride took me home without incident, other than a near-miss and imprecations at 7th and M streets. Note to self: ride on the right.

Obviously, it’s a good thing we don’t have anything comparable to America’s First Amendment. Perhaps in 2030 our next Labor Prime Minister will commission a white marble building between the National Library and the High Court, "The Finkelstein-Ricketson Newseum of Fair & Balanced Journalism".