Austria is justly proud of its scientists – Schroedinger, Mach, Doppler, and Pauli, to name a few. Hence I was excited to be visiting the Naturhistorisches Museum Wien, or Vienna Museum of Natural History. It’s a stately pile in the city’s famed museum district.

The science there was great. But the global warming exhibits weren’t science, they were alarmist rubbish. 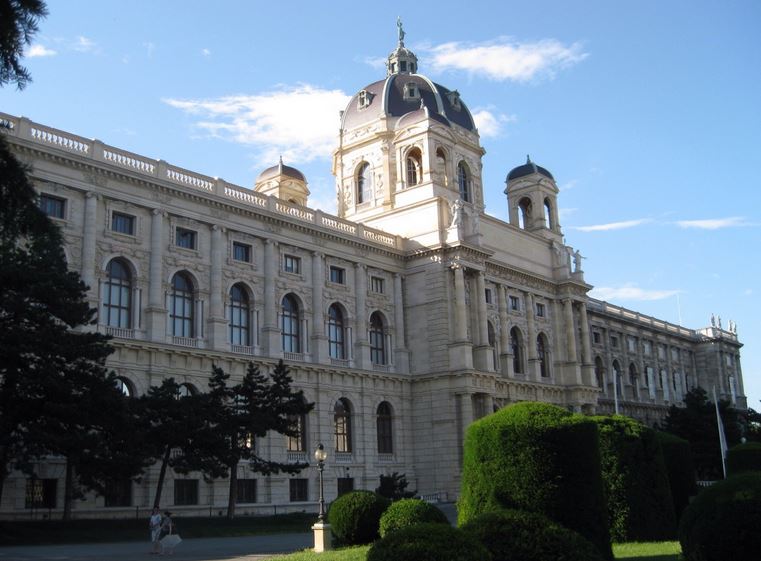 OK, I’m biased, but let me explain: One display is headed, “Climate models show the expected global warming for the next decades.” The illustration, headed “The world 4degC warmer”, is a color-coded map of the continents.

I paused. Four degrees warmer within decades? Like, 2030, 2040, 2050? Considering there’s been no warming for 17 years, the forecast seems a stretch. I wondered if the English translation had gone awry, but the label alongside said the same thing in German.

What’s more, the display seemed already a decade old, judging by references I noticed to incidents in 2002. Museums canbe pretty slack about updating their displays. So that might bring the heat apocalypse forward to, say, 2029, when I’m just settling into my high-care retirement home.

Was this display the work of some rogue activist curator? Nah. All around were fantastically alarmist efforts such as “The climate bomb in the oceans” (“Global warming could destabilise these deposits [of frozen methane]. Subsequently, the emission of huge amounts of greenhouse gases would heat up the atmosphere even more”). Sure, maybe 20,000 or 200,000 years from now. And the Arctic? “The Arctic could be ice-free in summer from 2060 on.” Whatev‘, as our PM likes to say.

What? Two metres? Within decades? Even the Intergovernmental Panel on Climate Change only rabbits on about a 0.6 metre rise by 2100, and latest data in fact shows sea rises slowing, not accelerating.

Anyway, I took a camera snap of the hypothesised Australian continent, but doltishly managed to catch only the western half (left). Even so, poor Perth! The whole fertile south-west is shown as fawn, “Uninhabitable – Deserts”. That’s a shame because my daughter just bought a house in Claremont. Maybe I should buy her a camel for Christmas.

The whole north-western coast is projected to be under water for many kilometres inland, but here’s a surprise: About half way between Perth and Geraldton to the north, a big blodge of lush fertile countryside appears, extending northward to about Port Hedland and inland to about Wiluna, taking in Mt Newman and Paraburdoo. Iron ore? Forget that! Lang Hancock’s mountains will be terraced into rice paddies.

For some reason the rice paddies fade into continued desert from Port Hedland to the top of WA, but there’s another splodge of inhabitable green from there east to Darwin, ideally suited to boat people from Indonesia. Why?

Because when I cast my eyes further north to South-East Asia,   the whole of Indonesia – oh no! – was flooded and/or uninhabitable, except for Borneo which has turned into desert. Malaysia, Singapore, Vietnam, Myanmar, Philippines, forget them all, uninhabitable!

A cursory look at Africa, uh oh! All uninhabitable except for a mysterious green swath from about Senegal/Mauritania east to Niger-Chad.

South America: wow, that mass has become a wasteland of deserts and cyclonic storms, apart from the deep south of Argentina and Chile (or what’s left of Chile after two-metre coastal flooding).

Kiss goodbye to India south of Mumbai, with India’s southernmost 200km flooded and the rest uninhabitable, along with Sri Lanka. Yeeps, that will really get the boat people going, or coming.

Apart from the green exceptions I’ve mentioned, kiss the whole southern hemisphere goodbye. It’s all very depressing, even though when temperatures really were four degrees or more hotter 150m years ago, the dinosaurs had a great old time nibbling palms, ferns and each other in the lush rainforests.

The Vienna Museum of Natural History then throws science holus-bolus under the bus and gets to work in full activist mode. We (the OECD group, that is) must cut our energy consumption using new, gentle and renewable technologies to save the planet, correcting the errors of the 20th century and fighting off George W Bush’s axis of evil with the US petroleum industry, as at 2002.

I limped from the Vienna Museum of Natural History, nursing my hard-worked Canon IXUS Powershot and feeling sad for Austria’s distinguished traditions of science. The displays are targeted at schoolkids and corrupting the young is a crime, as Socrates would attest.

Freedom ride ’round the Potomac

Even this mob can’t hold a candle to Gough & Co.