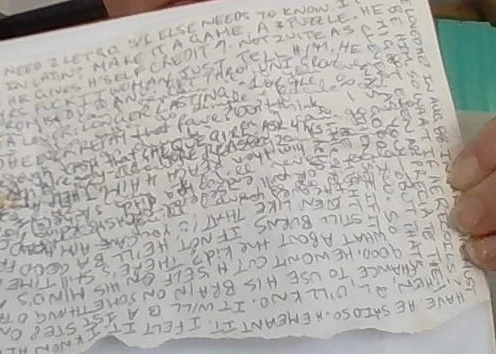 The Federal Court’s publication of the statement has renewed the debate about the veracity of the rape allegations. But is it feasible to speculate about guilt or innocence when it is impossible to know the unknowable?

In this context, I published an article in Quadrant Online on March 9, 2021.[2] The article, entitled Who Next Will be Accused? discussed these allegations, which were made by a woman, since deceased.  Specifically, I recounted Porter’s now notorious news conference about the alleged rape of the 16-year-old girl in Sydney in January 1988, when both participated in a debating competition at the University of Sydney.  I noted in my article that the former attorney-general strenuously denied the allegations, “contained in a detailed, but anonymous letter”. Porter repeatedly stated that “the alleged event never happened: at the time he was just a teenage boy who participated in a debating competition” and that in the court of public opinion, he would be effectively asked to prove that an alleged event never happened.

Now that the statement of Katherine is available, it becomes possible to revisit this sordid saga. Her statement is organised into three parts:  the first part covers the period 1986 to 1988; the second part deals with the events of January 1988, and the third part deals with her interactions with Porter in 1994. The statement is preceded by a six-page Memorandum, stamped “URGENT, Private & Personal & Confidential”, written by friends of the deceased and addressed to the Prime Minister, the Hon Scott Morrison PM, and senators Penny Wong, and Sarah Hanson-Young, representing the three major political parties in Australia. The document encourages these politicians to work together “to find a path forward in this case that does justice to Katharine’s memory while not unfairly prejudicing the Attorney-General.” A contemporaneous diary supports some photos that are appended to the statement.

In the first part, Katherine recounted that on the afternoon of the debating competition’s Formal Dinner in the first week of January 1988, she ironed Christian Porter’s shirt – she refers to him as “CP” – at his request. She describes the scene as follows:

CP came over … with the blue and white-striped shirt, which he wanted to wear that evening, for me to iron. CP sat on a chair and watched me while I was ironing. He said that I “would make someone a wonderful wife one day”. Not only was I “so smart and so pretty” but I could do all the “good housewife things”.

According to the statement, Porter went on to explain that

he would need a smart pretty wife to help his political career, and then boasted that he would be Prime Minister of Australia one day. By the age of 50, he predicted. I was flattered by his compliments and implicit suggestion that I would be an ideal wife for him.

Katherine described the rapes, which allegedly occurred after they returned from that evening’s dinner, in graphic detail in her statement. Katherine claimed to have strongly objected to performing oral sex, and that, after vomiting on her dress, she was undressed, and bathed by CP in a bathroom. Afterwards, they got into her bed together and she fell asleep in his arms. She woke up when she was allegedly being anally raped by CP.

The third part of the statement describes the events of 1994. When Katherine attended a dinner of the Australian Historians’ Association in Perth in September of that year, she had dinner with Porter. She described the dinner conversation in her statement:

As I recall, he used words along the lines of, “you know you owe me one” (presumably a reference to our not having had vaginal intercourse in 1988). I was revolted … We finished dinner, and CP walked me back to the UWA college where I was staying … I said goodbye to CP at the entrance to college, went up to my room … I felt shaken, but relieved, as if I had broken a spell that had been cast some seven years earlier.

Of course, the detailed graphic nature of the allegations, by itself, does not guarantee that these events took place. Indeed, there are other recent examples of detailed allegations of sexual abuse which were not proven to be reliable. The well-publicised case of Cardinal George Pell comes to mind as an example. Pell was exonerated by the High Court of Australia after spending more than a year in prison for sexual abuse, even though the jury, acting rationally, should have entertained “a doubt as to the applicant’s guilt” and that there was “a significant possibility … that an innocent person” had been convicted.”[3]

In the Porter case, it is possible that the detailed nature of the allegations, as described in Katherine’s statement to the NSW Police, is the result of fertile imagination of a successful novelist when constructing a story. In addition, Katherine had suffered from mental illnesses since 1988, which could have further clouded her memory of events. Her friends, when sending their submission and Katherine’s police statement to the politicians, commented that even her parents were worried that Katherine “may have confected or embellished the allegations due to her mental illness.”

I stated in my Quadrant article that, since Katherine hanged herself on June 24, 2020, “It is fair to say that we will never know whether the alleged rape happened.” This comment precipitated a furious response from Peter Smith, a frequent contributor to Quadrant Online and, usually, a perceptive commentator on illiberal activities which are devouring Western civilisation. In the comments section, he retorted: “No, I don’t think it is fair to say this. Just as I don’t think it is fair to say that the world will never know whether I tripped an old woman up and stole her purse when I was a teenager. It would be a baseless and ridiculous charge, necessarily without a tad of evidence to back it. People of common sense should know that I didn’t do it as equally they should know that Porter didn’t do it.”

Surely, this response trivialises Katherine’s allegations: the example of stealing the purse of an old woman when he was a teenager is not quite in the same league as an allegation of raping a 16-year-old teenager. Smith’s reliance on “common sense” is arguably erroneous, considering that common sense would indicate that, if there is inconclusive evidence of guilt or absence of guilt, the only conclusion that could sensibly be made is that “we will never know whether the rape took place”. While it is not a good idea to subscribe to the “I hear, I listen, I believe” mantra, the opposite view that complainants must never be believed, is equally deficient.

In an upcoming book Mau Mau Whitewash – Britain Slandered about the Mau Mau insurrection in Kenya in the 1950s, Lee Boldeman explains that in circumstances where the direct participants in historical events have died and, therefore, can no longer provide eyewitness accounts of the relevant events, it will be notoriously difficult to ascertain the truth. Ancient historians supported this view of history and considered that history can only be written by those who participated themselves in the narrated events. Hence, the reconstruction of historical rape events is always a challenging and perilous task.

However, Katherine’s friends, in their submission, believe that the claims are true. They state that  Porter stands accused “by someone who is now dead and who took her life because of his actions.” This statement cannot be clearer as it links Porter directly to allegations, which are taken to be substantially, if not completely, true and make him responsible for Katherine’s death.

Katherine’s statement reveals that she had feelings for Christian Porter. It is not fanciful to speculate that non-fulfillment of her expectations may have contributed to her mental illnesses and her eventual death. Indeed, some comments in Katherine’s statement suggest she may have had an expectation of a shared life with Porter. She talks in her statement about her “relationship” with “CP”. Reflecting on her alleged horror night with Porter, Katherine states:

All I could cope with, as I remembered parts of the night before gingerly, was the idea that things had gone “a bit too far” with CP, the previous evening. But it was OK, I reassured myself, because we were going to get married – one day. CP had implied this to me on the previous afternoon, when I was ironing his shirt … I continued to believe that he and I would, ultimately, get married, for several years.

In their submission, Katherine’s friends claim that, on the day of her death she “cut her hair into the style that she has in the photo with Christian Porter in Appendix 1 of her statement (a hairstyle she had not had sine 1988). And then she hung (sic) herself.”

Porter initiated a well-publicised defamation case against the ABC’s Four Corners program that initially aired the rape allegations in early March 2021. In this context, I argued in my Quadrant article that Porter, who was my colleague at Curtin Law School before he moved to Federal Parliament, was entitled to the presumption of innocence, as are all people accused of historical sex crimes. My argument was based on the rule in Briginsham v Briginshaw[4],  decided by the High Court in 1938, which provides for the presumption of innocence in civil matters when a criminal offence is alleged to have happened.

However, it is unlikely that contemporary judges would follow this rule in civil matters such as defamation because it appears that the law has now shifted the onus onto the plaintiff – in this case, Porter – to prove the falsity of the rape allegations in an action for defamation. The Supreme Court of South Australia has ruled that, “High Court judgments do not import that presumption [of innocence] into the civil arena.”[5]

Thus, whilst the presumption of innocence prevails in criminal cases, in defamation cases, which are civil cases, the presumption may not apply. That may well be a reason why the defamation action was discontinued, and a settlement reached between Porter and the ABC: it would have been difficult for Porter to prove that the allegations were untrue.

Katherine’s statement appears to be compelling and many of her allegations are supported by contemporaneous diary entries which were attached to the statements. However, in ultimate analysis, it is fair to say that people will never know whether the alleged rapes happened.[6] But Porter’s case certainly illustrates how a person’s reputation can be thoroughly and irretrievably trashed when events such as these unfold.

Hence, in a story like this, there is always a need to exercise caution. Recognising that the truth in this matter is unknowable is common sense!

Gabriël A. Moens is Emeritus Professor of Law, The University of Queensland. He served as Pro Vice Chancellor, Dean of Law and Professor of Law at Murdoch University. He has taught extensively across Europe, the United States, Asia, and Australia. He writes short stories, and he has published a novel about the origins of the Covid-19 virus, A Twisted Choice (Boolarong Press, 2020).

[6] See Paul Karp, ‘Statement given to NSW police raises questions over Christian Porter’s denial of sex with accuser’, The Guardian, June 30, 2021 at https://www.theguardian.com/australia-news/2021/jun/30/statement-nsw-police-raises-questions-christian-porter-denial-sex-with-accuser.

Rule of Law vs the ‘Law’ of Rules

If the Will Were There to End Vaccine Mandates…