Conservatives are wont to care about the underpinnings of a free society found in the rule of law, social capital, virtues and tradition.  They use terms like “ordered liberty” to justify the constraints that might be applied to otherwise unfettered free markets, where the monetization of everything routinely occurs without the apparent concern of libertarians. Such thoughts come to mind as the nation finds itself caught up in what is merely the latest in a long line of sporting disgraces and debacles.

Despite attempts at humour – for example, by Australia’s paper of record, the NT News, which referred merrily to Australia’s ball-tamperer Cameron Bancroft as having a … well, let the front page reproduced below speak for itself – Australians on the whole seem far from amused.  Such is the widespread angst that even that bastion of smoothly effected public relations practice, Cricket Australia, has deemed it wise to keep apologising for the behavior of our players and, this time, to act meaningfully and punish rather than reward wrongdoing.  I have already received two stern updates from CA chief James Sutherland and anticipate several more in short order. 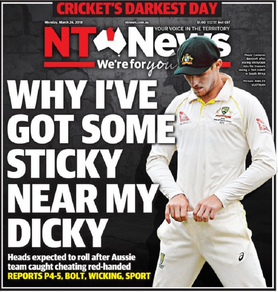 There are so many angles taken by sports journalists and professional and amateur moralisers on this matter that one scarcely knows where to start.  Yes, Smith and Bancroft are not the only ones who have done this.  Yes, they all do it.  Yes, the International Cricket Council (the IPCC of cricket, one might say, run by similarly suspect types), has previously whipped wrongdoers with feathers.

And yes, it is the team and corporate culture that is also to blame, not just the hapless and inept Cameron Bancroft and those who conspired to put his inadequate sleights of hand on display for eagle-eyed TV cameras.  Yes, there are other awful things about this Test series, and, yes, including South African officials’ public denigration of an Australian player’s wife.  Yes, Test cricketers are overpaid bleaters.  Yes, they speak endlessly in meaningless self-serving clichés, but that is to be expected.  They most likely think in self-serving clichés as well.

Australians, correctly, want to hide from the shame.  We all know this doesn’t pass the smell test, and, whatever other countries’ cricket establishments do and whatever the ICC does about unacceptable behavior, we are better than that and better than them.

All that is agreed.

But how did it all come to this?  One simply cannot imagine 1940s English captain Norman Yardley tastelessly sledging Don Bradman over a private matter concerning Dame Jessie Bradman a decade earlier.  Of course, there was bodyline, as Roger Underwood has recently reminded us in these pages.  Cricket was indeed played hard then, and, at least by the Poms, with scant regard for the niceties — so much so that the Australian captain of the day, Bill Woodfull, still smarting from being belted above the heart with one of Harold Larwood’s thunderbolts, was moved to note that there was only one side on the field actually playing cricket.  And Dr Grace himself, the very first Mr Cricket, was certainly prone to cheating in the financial sense, and routinely guilty of playing fast and loose with the gentlemanly precepts of the game.

Despite bodyline, there is no doubt that the game is almost unrecognisable from that which was played a century ago.  What has changed? 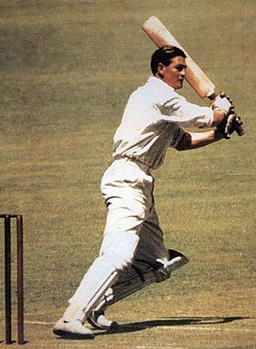 Two snippets suffice to demonstrate the magnitude of the change in cricket and, indeed, sport generally.  The first is the legendary Australian allrounder and Mosquito pilot (left)  Keith Miller’s retort when asked about the “pressure” of playing Test cricket:  “Pressure?  Pressure?  That’s not pressure,” he femously replied, “Pressure is having a Messerschmitt up your arse.”

“No, Mark, that isn’t a tragedy,” Benaud replied, “mass starvation in Africa is a tragedy.”

Yes, one big thing that has changed is the loss of perspective.  This is sport.  Losing wickets isn’t “tragedy”.  Playing cricket isn’t “pressure”.  Cricket is not life.  But is should still be permitted to say deep things about life. Indeed, it should be expected to do so.

What explains the sea-change that has occurred?  There is no doubt that sport has been caught up the sheer awfulness of the corporatisation and the commodification of everything.  The contemporary world is monetised to within an inch of its life.  From farming – yes always a business but now thoroughly financialised – to government, to the administration of sport, to education.

The monetisation of cricket has come in waves, each one seemingly ushering in a positive reform to the benefit of the game.  For example, there was Kerry Packer’s apparent support in the 1970s for cricketers being paid a decent wage and sharing in the spoils of the then Cricket Board, itself now corporatised as “Cricket Australia” and festooned with all the modern corporate ghastliness – the pretend jobs, the endless marketing, the press conferences, the public relations, the media management, the cliché ridden messaging. Packer’s 1970s push, of course, like Rupert Murdoch’s in the 1990s which completed the transformation of rugby league, already underway, into a commercialised, over-hyped, over-priced shadow of its former self, was really about nothing more than TV rights and corporate profit.  Nowadays, we have both genuine stars like Steve Smith and nonentities like Shane Watson earning literally gazillions, often on the back of corporate sponsorships and participation in pop-star cricket in India and elsewhere.  All sense of perspective lost. 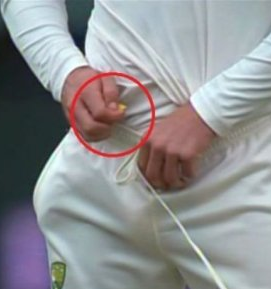 Does monetisation explain a deterioration of standards of behaviour and propensity to varying degrees of cheating among the elite players of most countries?  Yes and no.  Yes, when the financial stakes are so high there is also a tendency towards the loss of perspective that has accompanied the current generation of sportsmen’s near ubiquitous flouting of the former norms of manners, behavior towards opponents and a what should be natural inclination to honesty.

But no, the decline of sport as a public stage on which the traditional virtues flourish is not just the result of marketisation. The culture itself has changed forever, in other and more sinister ways.  All this has happened to sport just at the time when objective, acceptable standards of behavior — what constitutes agreed virtue, if you like — have been replaced by relativism as the world’s operating system.  Hence the excuses that have rolled out this past week – they all do it, it isn’t really cheating, it doesn’t matter that much, let’s move on” – have currency in many of the institutions that matter, and this is the result of creeping post-modernism.  What we have, not just in sport but everywhere, is an operating system where the very notion of virtue is under siege, where values are contingent.  What does it mean when we hear, as millions of Australians are now saying, “What you did was wrong”?  What does saying such a thing mean now, and how, and how much, does saying it count for anything? Yes, we should be heartened that is the public sentiment of the moment. But will it change anything, moderate the mores by which the world now operates? 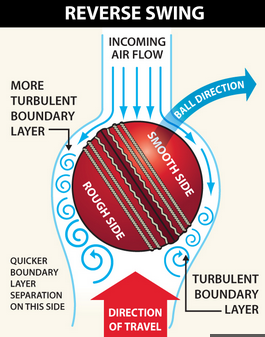 Given the current furore, of course, it was inevitable that poor old Trevor Chappell, he of the infamous underarm incident of February 1981 against New Zealand, would be wheeled out for comment.  He said that these players would be tainted for life by their actions, just as he was.  (Mind you, he has made a bit out of the dinner speaking circuit).  As an Australian currently living in New Zealand, I can attest to the longevity of memories of these things and the lingering Kiwi bitterness over it.  Trevor’s brother and captain Greg Chappell was also vilified, indeed more so.  But he wasn’t punished for his actions by the then Cricket Board.  Technically, what he instructed Trevor to do wasn’t “cheating”.  Nor was bodyline, at the time.  It was just off, and known by most to be off.

These things all failed the smell test, just like the Australian team’s actions of the weekend.  It is noteworthy that it is the public that has called time on rancid on-field behavior.  It is, above all, a national embarrassment.

Perhaps, then (and ironically), there still is a place for nationalism in a corporatised and globalised world.  It is, above all, Australian shame that we are experiencing, and that still seems to matter.  Perhaps also, there is also room for the conservative’s instinct that craves the civilising crutch of tradition and its attendant supporting mechanism for the free society, virtue.  Call it the longing For an ordered liberty that speaks to moral behavior that flies in the face of relativist “corporate world”.

Would libertarians equally worry about these matters?  I would doubt it.  They value freedom above all else.  The freedom to make lots of money from entertaining people is a fundamental right for the professional athlete.  And corporatised life is simply part of modern business practice and of contemporary capitalism. Cricket, too,  is now a business, and decency and virtue no more than optional extras.  That’s life in the marketplace.

Well, for my money, it isn’t.  There is more to cricket than money.  It is awful that, one by one, the sports we all loved have been turned into something very different.  Oh yes, on the surface, they are still the games we once cherished.  But look a little harder at the folks who now play at elite level, their behavior, their culture, their operating systems, the words they use, their rewards, their lifestyles.  I don’t see much to be admired.

We do live in sad times, in times that disappoint routinely.  And we live in endlessly monetised, relativist, soulless times.  That is for certain. 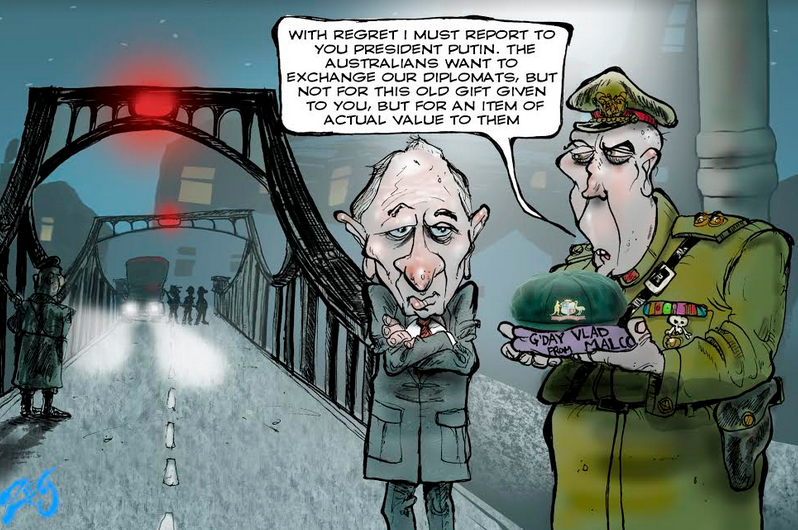