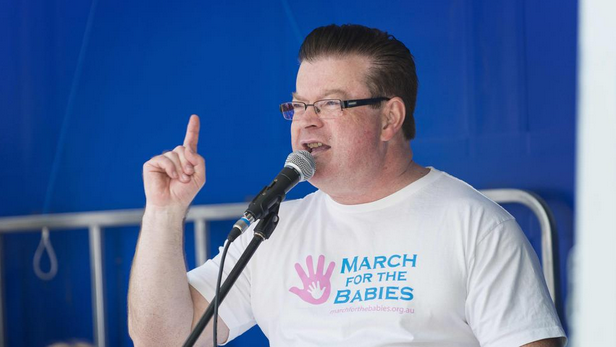 Well that makes it official: Victoria’s conservatives no longer have any mainstream party at the state level in which to invest their votes and confidence. The confirmation came on Friday morning (May 6) from the angry lips of Opposition Leader Matthew Guy, who launched into a spittle-flecked rant — there is no other word for it — about what he evidently regards as an odious and thoroughly unpleasant member of the upper house, fellow Liberal Bernie Finn (above).

Mr Finn’s offence? Stating in a Facebook post that he is praying for Roe v Wade to be overturned by the US Supreme Court. Quizzed about the post a day earlier, Guy shrugged it off. “Bernie has his own points of view,” he told reporters. “I’m not interested in commenting on social policy in the United States. The Liberal Party in Victoria is focused on matters in Victoria.”

Fair enough and as it should be, one might think — a Liberal leader defending, albeit with characteristic limpness, the right of a colleague to hold and advocate views unpopular with many. Ah, but that was Thursday. By Friday morning, Mr Guy was displaying a measure of vitriol many Victorians wish he would direct at Daniel Andrews and the various public institutions the Labor Premier and his government have corrupted, perhaps beyond redemption.

Where might he start? Perhaps with Victoria Police thumping, firing upon and pepper-spraying critics of the Labor government and its COVID lockdown regime that, amongst its other impacts, has reduced Melbourne’s CBD to a hollowed-out shell of its once vibrant self. That would be grist for a competent Opposition leader’s mill, the sort of leader who would likely be inclined to demand a royal commission into policing in Victoria. If nothing else, the fact that VicPol found chicanery aplenty in Labor’s ‘Red Shirts’ scandal yet declined to prefer charges or, in some case, even interview the politicians implicated should be the sealer. But Matthew Guy is not that person.

What about VicPol’s persecution and tactical leaking against George Pell, an innocent man? Bernie Finn demanded an independent inquiry into the stitching-up of a prince of the Church, but Guy hasn’t made an issue of that outrage. Without telling tales out of school, the reason for Liberal silence became apparent a year or so ago, when I happened to be lunching with a senior Victorian Liberal, a member of the shadow cabinet no less, and put it to him that there was ground to gained by pounding the issue of, again, VicPol’s malfeasance and, at a higher level, the gross incompetence (the charitable explanation) of the two Court of Appeal justices who rejected the cardinal’s appeal out of hand.  The reaction from my companion was one of horror. “Pell is a very divisive figure,” my host said with what verged on a shudder. “There’s no gain in us going anywhere near that.” An opposition leader worth his salt might have looked beyond the individual, Pell, to focus on the diseased ethics of a police force capable of perpetrating such a travesty. But the party of Matthew Guy is not that entity.

Guy, one could reasonably conclude on the basis of his overnight about-face, is a weather vane, in this instance reacting to a Twitter mob’s pile-on which included fellow parliamentary Liberals’ bollocking of Finn. State member for Brighton James Newbury,  for instance. 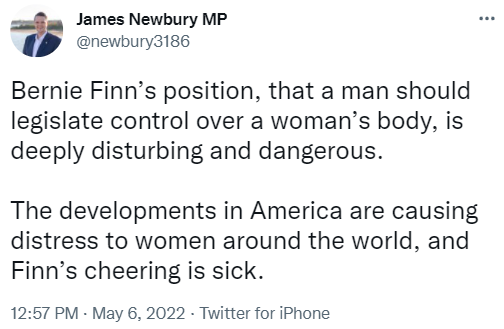 Other Liberal MPs raced to assure reporters that Finn is a wretch, out of step with party values, and to assure the press pack that, speaking for themselves, they are devoted absolutely to “a woman’s right to choose”. It seems the state Liberals’ “broad church” has narrowed considerably. Tactfully, unlike Newbury, who at least has the courage of his convictions to go public, their comments were non-attributable.

Matthew Guy for whatever reason, then did his 180-degree somersault. It was quite the turnabout.

“I think we’re all sick of Bernie Finn’s social media posts … I think the Parliamentary Liberal Party is absolutely sick of it,” Mr Guy thundered on Friday, less than 24 hours after his defence of Finn’s right to be a party contrarian.

“I am frankly sick of it and I think my colleagues are sick of it. I’ve not encountered a single one in the last 24 hours who is not as sick of it as I am. We are all over it.”

In case Finn didn’t get the message — or more likely to make sure reporters grasped that real Liberals are of one mind and safe guests at any inner-city dinner party — Guy then mentioned that preselections were imminent, the inference being that the maverick’s political career could well bear an immediate and perhaps terminal cost.

A state election is due in November, and if you didn’t know the character of the leading players in that contest, believing that the Opposition holds the upper hand would be the immediate presumption. Victoria is mired in debt and sinking further with every spendthrift day of the Andrews government. Projections arising from the latest state Budget, delivered mere days ago, is that the state will owe somewhere in the vicinity of $170 billion by the end of 2025. That’s the official guesstimate, one anyone who has noticed how not a single Labor project comes in at the promised price will take with a truckload of salt. Having squandered a billion-plus dollars by refusing to build the much-needed East-West tunnel lest the Greens of Fitzroy and Carlton get in a snit, Team Andrews announced it would build a West-East tunnel instead. That project is now three years behind schedule and at least $3 billion-and-rising over budget.

For an Opposition up to the task, one blessed by core principles, a touch of tactical nous and a cop-it-sweet contempt for Twitter’s peanut gallery and the local ABC and Nine newsrooms, Victoria would be a target-rich environment and the Opposition’s triumph in November assured. That is not Victoria’s Liberals, however, who along with a policy of going along to get along don’t seem to grasp their state’s demographics beyond, say, the well-heeled voters of Mr Newbury’s upper-crust Brighton, where so-called ‘Independent’ and former ABC hack Zoe Daniel is giving Tim Wilson a hard time in the contest for the federal seat of Goldstein.

Finn’s electorate, the Western Region of suburban Melbourne, is cut from different cloth. In Brighton, the teal ladies rallying to Ms Daniel favour fashionable and pricey Lululemon active wear; in the west it’s trackie dax and not just for exercise class. It’s a bit rougher in those outer suburbs, a bit unkept. Areas such as Tarneit, Melton and Trugannina are heavy with migrants and, at a risk of generalising, the values and  bread-and-butter concerns in those suburbs differ markedly from the catastropharian preoccupations in places where teal now holds an appeal beyond Liberal blue or Labor red.  That Finn has commanded the loyalty of locals in election after election might convey to an astute mind that here is to be found the future of the Liberal Party — the suburbs of John Howard’s “battlers” rather than the comfortably secure residents of climate a’feared, green-tinted precincts who fret about Gaia’s miseries rather than interest rates, violent crime and trusting their kids to a state education system where boys can be girls and penis-tucking is an advanced elective. It is a divide captured in a few short words by The Australian‘s state parliamentary correspondent John Ferguson, “the high-vis curtain”. Ferguson continued: “For months, political polling has been picking up a trend of deep voter anger in the outer suburbs and interface seats where people are more likely to work in a small business, a trade or have insecure work.” This is Bernie Finn’s stamping ground, his home turf, and yet his party leader leaves no doubt that he wouldn’t consider it any great loss were he to vanish or be banished from the upper house ticket. Go figure.

On Friday it emerged that Premier Andrews has been grilled twice by the state’s anti-corruption body, apparently about two separate matters, one of which is said to involve his relationship with a property developer. When asked to specify the subjects of these inquiries, Andrews simply refused to answer and the presstitutes of Spring Street obediently closed their notebooks and returned to assailing a Liberal for opposing legal abortions. True, Guy had a few stern words for the Premier and demanded that he stand down. No doubt Andrews had a good chuckle at that one.

There is much less to amuse garden-variety Victorians, who the polls still suggest will quite likely return Labor in November. It can’t be because they favour the institutional corruption that has reduced a police force sworn to ‘defend the right’ to the paramilitary wing of the Labor Party. It can’t be because voters approve of Victoria incurring a greater public debt than NSW and Queensland put together. Nor can it be, as the state Budget papers state, that Labor intends to gouge yet more hundreds of millions of dollars in fines from motorists snapped 3km over speed limits set absurdly low in order to entrap them.

No, none of that, for there is only one explanation: in order to vote the Opposition onto the government benches there first of all needs to be an Opposition built upon principles more enduring than a whining passivity. That leaves only one alternative to Andrews & Co., a solution already embraced by tens of thousands of Victorians and reflected in the state’s shrinking population: hit the Hume Highway heading north, cross the Murray and quit this shambles of a state for good. If only Matthew Guy would make the same trip.

11 thoughts on “The Ever-Narrowing Church of Victorian Liberalism”

The Simpletons of Spring Street