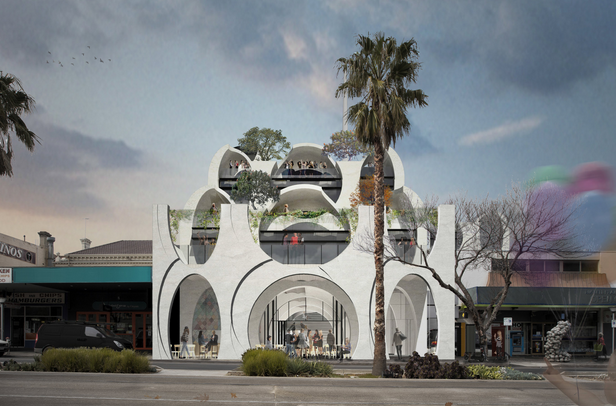 We could do with some good news down here in Melbourne, where a kind of grey despondency cloaks the city, rather like East Berlin circa 1960. Though officially loosed of our lockdown chains, the vacant shops and empty offices suggest a bona fide economic recovery is a long way off. Of course it’s not all gloom: Premier Daniel Andrews’s government’s sterling record in keeping coronavirus deaths in Victoria down to only 820 out of the national total of 909 – that’s 90.21 per cent – shows what good hands we’re in as we wrench ourselves out of the quagmire of restrictions and embark on the painful climb back to “normality”, if anyone can remember what that is.

The good news is that through all the disruption and suffering, Melbourne’s gift to Australia, its unique contribution to social exclusivity and communal disunity, has being forging ahead unhampered by the legislative strictures that have shut down just about everything else. I refer to the Pride Centre (above) in beachside St Kilda, a monument to the power of the gay, lesbian, trans etc. establishment in contemporary Victoria. Its progress is worth recording as an example of that selectivity which has seen not everything in Victoria put on hold. I suppose it depends on who you know, and the Pride Centre has powerful connections in high places.

It is now moving towards its opening ceremony in May. On its website some of the interiors of the grandiose new temple of divisiveness are on display. Though as an edifice designed by cutting-edge architects it will automatically be described as ‘iconic’, the building is nothing to write home about aesthetically, its principal feature being a series of round and oviform holes, one above the other, jumbled together to make a façade. It looks like a piece of Swiss cheese in a Tom and Jerry cartoon.

Nor is it felicitously located. On its doorstep in Fitzroy Street, formerly Melbourne’s most ‘cosmopolitan’ avenue and now rubbish-strewn and melancholy, homeless representatives of our so-called ‘first nations’ congregate, some slumbering, others engaged in unseemly squabbles or hurling invective at passers-by. It’s unlikely that the highly placed members of the Pride Centre board (bureaucratic mandarins, banking panjandrums, legal hotshots, all presided over by veteran ‘Gay Lib’ trouper Jude Munro AO) and their grand guests will wish to encounter these inconvenient citizens as they step from expensive cars for May’s opening ceremony.

This will create a quandary. On the one hand the local authority, the Port Phillip City Council, which is responsible for streets and public places, is second to none in its aspirations to ‘inclusivity’ and its protestations of ‘respect’ for the various ‘nations’ to which these unfortunate down-and-outs belong, and is always piously ‘acknowledging’ that they somehow have custody over the land the municipality stands on. The Pride Centre even has an Aboriginal board member, though not a homeless one, Dr Vanessa Lee-Ahmat ‘from the Yupungathi and Meriam people’, who in her day job is one of the army of toilers in the ever fertile field of opposing ‘domestic and family violence’. On the other hand, you can’t have the street-dwellers greeting the gathered dignitaries with picturesque epithets. You can’t have the Pride Centre’s designer-clad membership stepping over their recumbent forms on their way to the weekly ‘tomboy party’ (‘Meet the real babes of Melbourne on a steamy rooftop!‘) or making a quick visit to Be Who You Are (‘clothing and makeup support for transgender women all ages 16+’). That would be just, well, too inclusive.

The GLBTI-and-so-on ‘community’, as an allegedly persecuted minority, is a paid-up component of the Left, and the Left is a vipers’ pit of competing ‘identities’. In any given skirmish you need to know which identity trumps which. For example, for feminists does a woman’s right not be genitally mutilated trump a Muslim’s right to mutilate? (‘Usually not’ is the answer, though if this were a Christian practice there would be feminist shrieks that it was the most barbaric thing imaginable.) In the case of the Pride Centre the issue is less clear, but the smart money is on the council finding a way to disencumber the Centre’s showy elliptical portals and send the homeless packing (not that they have anything but a few grubby blankets to pack).

This is because this particular municipality has form in exploring the frontiers of wokeness, being the same council blasted by the Victorian Ombudsman for skipping the required tender process to  employ self-declared “white witch” Caroline Shabaz as a “change management consultant” at the cost of some $620,000, plus another $200,000 in consequent legal fees. In another testament to Port Philip Council’s stewardship, some years ago it decided itinerant Aborigines gathering on public land near the beach, where they could use the lavatories, were in the way of a ‘beautification’ scheme. The council pulled down the lavatories and the Aborigines disappeared. There are no lavatories outside the Pride Centre (there will presumably be sumptuous ones inside) but doubtless some other stratagem will be found for bundling the ‘first nations’ folk offstage. Cheerfully cooperating with this will be Victoria’s aggressively politicised police, keen promenader in gay parades but hopelessly compromised by, among other things, trying to frame George Pell, exploiting the relationship of trust between Lawyer X and her clients and conducting no more than a limp and quickly abandoned investigation of Labor’s ‘Red Shirt’ rorters.

The whole saga encapsulates the hypocrisy of identity politics. The homeless have no political or social clout. The gay establishment has, enjoying this exalted status because of what philosopher Camille Paglia has identified as the obsession with homosexuality common to declining civilisations like ours, and of course our pathological mania for ‘diversity’. Yet where’s the diversity nowadays in being ‘queer’, ‘non-binary’ or even trans? It’s the defenders of old-fashioned normality who are out of step now; indeed they are criminalised if they fall foul of Victoria’s new ‘conversion’ prohibition bill. Why turn back the clock by constructing an edifice that by its very existence reinstates discrimination, albeit in the opposite direction from the way it used to be?

If, as the Left never tires of bleating, sexual discrimination is a social evil, so is the lavishing of public money on such a divisive project. This same municipality probably hasn’t a clue how many homeless are sleeping on its streets, yet it had the nerve to contribute the equivalent of $13 million to the Pride Centre by donating the land. It could have provided many beds in shelters for that. The Victorian government’s gift of $15 million would have paid for a lot more. But what’s that compared with funding a ‘beautiful, safe and inclusive place’ where (if you’re lucky enough to be included) you can sit and sip a Queer Coffee all day and witter on about social justice?

Christopher Akehurst wrote “The Decline of the Suburban Church” in the December issue.

‘I Couldn’t Be Prouder of Them’