In Praise of Tony Thomas, Journalist 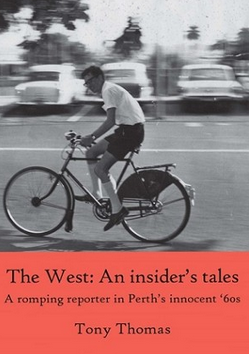 Readers of Quadrant (and there is no excuse for not being one) will know what a splendid writer Tony Thomas is, with a rare blend of graceful style, humor, meticulous research, a steely commitment to the truth with intolerance of fashionable cant, and as indefinable quality that is all his own.

Growing up in a communist family, and for some years as a very young man a party member, he has become a deadly enemy of the left, particularly of fashionable “Green” idiocies and the global warming hoax, though not blind to the less-intelligent aspects of the Righy..

One gathers disillusionment came early. His essay here on Paul Robeson (brought to Australia by the so-called “Peace Council”) is a merciless expose of Robeson’s conscious (not naive) covering-up of Stalin’s murders.

I was a cadet reporter on the West Australian when many of these pieces were written. Tony, working a full shift as a reporter while turning out this seemingly effortless stream of memorable features in addition, was my journalistic hero. I turned the pages of his bulging cuttings books with awe. He took time to help me prepare my first important interviews and showed me how to frame questions so as to elucidate the most newsworthy answers. It was a better training in the craft than I think any latter-day college of media studies could provide. His features, many of them collected here, have not aged. They provide a wonderful and unique picture of Perth in the 1960s and were a local institution. My mother used to cut out some of the best and paste them in a scrap book, partly because she loved good writing but also in case I needed inspiration.

There was no one like Tony, though we did not lack talented reporters. It seemed to me then, as it does now, that if ever there was a natural-born writer, it was he. These pieces read as freshly as when they were written. They provide a wonderful, unique picture of life in Perth at a time when the great mineral developments of the North were turning it from a glorified country town to a city.

This book should provide hours of delight and fascination, but more than entertainment, it is a valid recording of social history, and it should be an enduring one. If in 100 years anyone is writing a history of these days and still reads English, this is one of the books they should turn to,

Some of the stories are tragic, like the tale of the last of the old Chinese market-gardeners, ending in destitute old age after a life-time of toil. When they were evicted from the South Perth foreshore to make way for development, the old “Charlies” cursed the land. Every development project since has failed there. For Wong Chew, the last of them, a collection was taken up so he could go home to Hong Kong to die and be reunited with the wife he had left there a lifetime before.

There were bee-keepers, desperately chasing back and forth across the state for gum-trees in blossom that might provide a “honey-flow.” Writing this involved investigating the bees’ somewhat brutal social life – a bee’s wings wore out in six weeks, after which it was thrown out of the hive to perish.

There were log-choppers and timber-jerkers, construction-workers on the sky-scrapers then going up, and the desperate struggles of the Playhouse Theatre to remain solvent in a community that basically wasn’t interested.

A feature on the West Australian Education Department’s monthly School Papers was particularly memorable for me. I knew the quaint old building where they were produced, and some of the people who wrote them, very well. While most of their content was bland, if informative enough, – “common objects of the seashore” always fascinated me – at school I had childish nightmares over a too-graphically illustrated poem, “Faithless Nellie Gray” by Thomas Hood. How did it get approved?

Tony risked trouble with the West by writing for the little University magazine The Critic on the taboo subject of homosexuality. However, nobody noticed.

Then there was official concern that children, and others, were getting drunk on liqueur chocolates. The Customs Department tried to interview him as to his sources on that one, which of course he refused to divulge. There were the adventures of a private eye before the Family Law Act dried up the business, and the annual burning by the industry of dud movies that could “no longer be sold even to country theatres.”

What gives this book both its historical value and its charm is that somehow Tony Thomas saw what others missed. Only he noticed something bizarre in the fact that Perth’s proud International Airport had kangaroo-paw flowers (a West Australian State emblem) growing in its gardens and a souvenir stall selling the chopped-off paws of real kangaroos made into bottle-openers and the like. He tried to find the supplier, but in this case failed. A truck-load of them arriving at the souvenir factory, he suggested, would have been an interesting subject for Salvador Dali.

These pieces weren’t produced effortlessly of course. Like any technique mastered to such a degree that it looks easy, there was behind them a great deal of hard work as well as an outstanding talent.

Tony was never, however, simply a writer of light features. He investigated the hard, dangerous lives of wood-cutters, and engine-drivers (with unreliable brakes) and other hard workers building, as Kipling put it, “rudely but greatly.” Some of this reminds me of Les Murray’s classic essay about “a working forest.” There were German anthropologists and bearers of theories that North-West Aborigines had borrowed words from early and forgotten European contacts.

Then there is his interview with visiting World Championship wrestlers, rejoicing in names like Gorilla Monsoon and his simian colleagues (actually highly-skilled tumblers, actors and acrobats). There was an interview with the “proud guardian” of the causeway rubbish tip, perpetually at war with “scroungers”.

He surprised many of us when he took the position of economics writer at The Age – it seemed too dry for him. But he had the intelligence to have schooled himself in a real understanding of economics. Coupled with his writing talent, it was a formidable (and rare) combination.

Perhaps every city is unique, but Perth in the 1960s was, if I may put it that way, perhaps more unique than some. Its atmosphere, with the subtle, pervasive influence of the Indian Ocean is captured authentically in these pages. He writes, too, of a skindiver bitten in two by a great white shark. Any deep green advocacy of the need to share the ocean with these purportedly gentle giants would not have got a good hearing then.

The book ends on a rather different note: Tony Thomas left his three-year-old daughter when his first marriage broke up and he took the job in Melbourne. His daughter, Ros Thomas, established herself in Perth as a successful and well-liked columnist and TV journalist. Tony writes frankly of his fraught, eventually successful, efforts to re-establish a relationship with her, not excusing his shortcomings or desertion of her, and she tells her side of the story here. By mutual arrangement, their two stories were published in her column in the West and are reproduced here. She recalls: “I never had a single photo of my dad … Actually, there was one dog-eared snap of us; lost now, but it was only of his hand steadying mine as a laughing toddler in the bath (I held that photo so many times as a kid, I thought if I looked hard enough, I would see love in that hand).” Lacerating.

But at least it seems to have ended happily. Tony says: “Over the last decade we’ve finally got to know a bit about each other … I love our odd new relationship.” To other absent fathers he says, “Stay in touch. Come what may. Keep showing your face. If you’re in another city, it’s harder to keep up the contact. Man up and do your best anyway.”

Great entertainment and a fine showcase of journalism at its best.

Online editor’s note: Many of the pieces referenced above have appeared in Quadrant and Quadrant Online and we would normally have embedded links to those articles. But not today. As Hal writes, the record of this observer’s eye is part of history’s record and they deserve more than the ephemeral attention of pixels flitting across a screen. Instead, buy the book. Tony’s talent deserves an investment in ink and paper, which can be made by following this link.

In Praise of Tony Thomas, Journalist