A Guilt-Edged Travesty Before the Altar 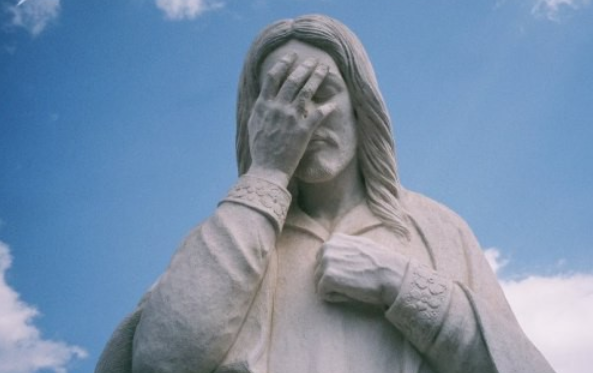 If you have any interest in Christianity in Australia you might want to watch the first ten minutes of the Australian Catholic Church’s Plenary Mass on July 3. There you will find the Aboriginal ‘smoking ceremony’, a purportedly religious practice dating back to the 1970s.  It is accompanied by the music of the didgeridoo.  Much more importantly, and of enormous theological significance, there follows an invocation of ‘male and female spirits’ by an elder of the indigenous community. Be patient, the spectacle doesn’t begin straight away.

Dealing first with the secondary issue of suitable church music, one accepts that the Catholic Church in this country is not noted for the high quality of its music, generally preferring songs written for the most part in America during the past 50 years to more traditional compositions.  Few Catholics seem aware these days that musicians of the first rank, such as Haydn and Mozart, were also Catholic, and that they wrote hymns; congregations usually prefer simple songs such as Hear Then What Jahweh Asks Of You, by such authors as Marty Haugen, not distinguished by the excellence of their melodies or profundity of their content.

Against that backdrop it is unreasonable to take exception to the use of Aboriginal music on aesthetic grounds.  In fact the didgeridoo produced quite an attractive sound, perhaps somewhat repetitive (if you want catchy tunes you’ll look elsewhere) but quaintly evocative and ‘atmospheric’, and certainly much more appealing to me than the folksy stuff we usually hear through the church PA system.

But the invocation of spirits is and always has been strictly forbidden by the whole Christian church.  In the First Book of Samuel, King Saul secretly consults a witch at Endor, having previously forbidden his subjects to engage in any form of necromancy.  This deceitful hypocrisy on Saul’s part leads to his own downfall and suicide.  Such a practice has always been regarded, in both Judaism and Christianity, as an insult to God.

There is no room here for controversy as to the facts and no point in pussy-footing around it: the inclusion of this ritual at the start of the Plenary Mass was a completely pagan act — pure paganism without intellectual content or integrity.  It should never have taken place within a Christian Church.  The fact that it did, and that it did so as a sort of preface to the Eucharist, and in the presence of a high proportion of the bishops, almost beggars belief.  You couldn’t make it up.

It’s a sorry fact, however, that in today’s Church such an absurd folly is all too easily believable.  The Australian church, like so many others in the imbecile west, has lost its way.

The good news is that the clip has been viewed by a tiny proportion of the nation’s practising Catholics and a vanishingly small number of their non-Catholic fellow citizens. As an item of news it ranks with small town fetes and minor folk festivals, and well below even the most trivial localised sporting event in our sports-mad country.

The Plenary’s apologies to all the usual victims, which predictably topped the agenda, will contribute nothing to the unity and harmony of the nation, but neither will they further weaken its social fabric, for their impact is virtually nil.  As Australia advances in maturity — if not always in wisdom — that sad old woke company of Baby Boomers, rusted into the fancies of the 1970s, is fast fading into insignificance and oblivion.

I do not question the personal integrity of those who conducted the smoking ceremony. They passionately value their Aboriginal inheritance and consider its preservation vital.  But the plain, sad truth is that the culture and language of many of the coastal aboriginal tribes is now extinct, and that rituals such as this are largely synthetic and therefore, in a strict sense, spurious.

“My DNA predates Australia,” claimed the elder, and that is no doubt correct.  But what DNA?  Aboriginal DNA only, or the DNA of all the other peoples whose blood flows and blends together in our veins?  And what is this ‘connection with the Earth’ of which we are constantly reminded?  Many Australian families of Aboriginal and European descent, or both, have lived here for centuries.  Is not the land our common home?  The congregation was invited to touch the ground, and all obediently complied.  A nice gesture perhaps, but hardly appropriate at a Mass that has its focus on Heaven.

A second non-Aboriginal speaker apologised on behalf of the Church for its abuse of indigenous people.  No surprises there.  But surely after years of saying ‘sorry’ we can finally let it go?  Endless talk of the ‘stolen generations’, while refusing to acknowledge so much good and often sacrificial work that men and women of the Church did for Aboriginals, is ungracious, dishonest and plain bad history.  Those much-maligned missionaries brought not just religious instruction (which of course counts for less than nothing in the secular mind) but also literacy, numeracy, education in the arts and sciences of the Western world, social work, housing, the common law, medical care.  And most of that at a time when the state did next to nothing to aid the native peoples.

The poor old Church has lost its mojo. Hardly anybody listens to it anymore because, by and large, it has forgotten its own message.  Chastened by disproportionate shame, dwelling chiefly on its past failings, ignoring its own best work, hoping only for acceptance by the trend-setters of the present age, it must recover its duty to preach the Gospel without apology or dilution.

The Left’s War on Faith