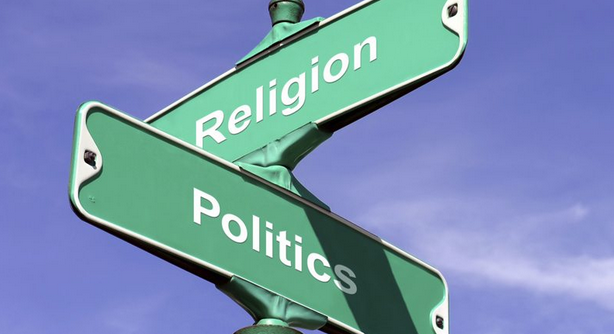 Much of the three televised debates between Prime Minister Scott Morrison and ALP leader Anthony Albanese has focused on economic and financial matters and who will best manage the Australian economy.  Ignored, as the Bible says: “Man shall not live by bread alone”. As argued by the British philosopher and cultural critic Roger Scruton, such is the impact of the culture wars and woke ideology that it is no longer enough to focus on issues like “market economics and free trade”.

In his book Conservatism, Scruton writes the challenge facing conservatives is to reassert the significance of Christianity. Scruton exhorts conservatives to

Scruton goes on to suggest central to the conflict between conservatism and cultural-Marxism is the process of “exploring the roots of secular government in the Christian inheritance” and re-establishing “confidence not in our political institutions only, but in the spiritual inheritance on which they ultimately rest”.

Hence the decision to publish Christianity Matters In These Troubled Times.  Given the increasingly prevalence and destructive impact of what Sydney’s Archbishop Fisher terms absolutist secularism it’s timely, notwithstanding its sins, to reassert the significance and value of Christianity. 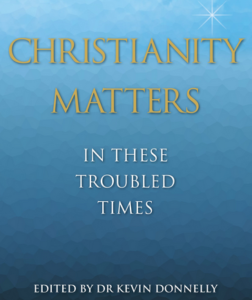 One of the most common criticisms of Christianity, and religion in general, is that Australia is a secular society and that one’s religion is a personal matter and not something that should be allowed in the public square or to intrude on public policy and governance. Ignored, as argued by one of the authors of the anthology, Augusto Zimmermann, is that Australia’s legal and political systems inherited from Britain are deeply influenced by Christian beliefs and teachings.  Those responsible for the Magna Carta and the struggle to limit the power of the monarch argued the King’s law was subservient to the law of God.

Zimmermann writes: “The idea of a higher law which protects the natural rights of the individual was first advocated by medieval scholars, then reshaped by the likes of John Locke and Thomas Jefferson, and then invoked in the 1960s in the struggle for civil rights in the United States.” The Preamble to the Australian Constitution includes the phrase “… humbly relying on the blessing of Almighty God”, and concepts like the inherent dignity of the person, the right to liberty and freedom plus a commitment to social justice and the common good are based on the New Testament.

As noted by Tim Costello and Martyn Iles in their respective chapters, Christianity is also vitally important as it promotes a strong sense of charity and willingness to serve others.  Costello writes “In Matthew 25, Jesus’s parable instructs His followers to care for the hungry, thirsty, homeless, naked, sick, and imprisoned – the marginalised, in whom His face can be revealed”.

Christian hospitals, aged care facilities, social welfare organisations and charities form a vital part of communities across Australia without which governments would be unable to cope.  Concepts like reciprocity and a commitment to social justice and serving the common good are also infused with Christ’s teachings.

When asked how he would characterise The Lord of the Rings, JRR Tolkien answered the trilogy was Christian in nature and it’s obvious concepts like good and evil, temptation and betrayal and redemption and forgiveness have strong Christian overtones.  Dostoyevsky’s Crime and Punishment, the poetry of TS Eliot and James Joyce’s Ulysses are all touched by Christianity.  The same can be said for much of Western culture’s art, music and architecture.  Peter Craven writes in his chapter in relation to Christianity:

… it’s intrinsic. When we stare at the Sistine Chapel ceiling or listen to Mozart’s Requiem or his Coronation Mass we are not experiencing the rhetoric of a religious vision but an essence where beauty and truth are at one. Think of the sublimity of Piero della Francesca’s resurrected Christ, think of the majesty and the dolour and of the thing which rises beyond the sorrow of the world in Bach’s Saint Matthew Passion.

To argue Christianity is one of the foundation stones on which Western societies like Australia are based and that it must be acknowledged does not evade the reality that much harm has been done in the name of Christianity and the Church.

The evil nature of child abuse is the most obvious grievous sin but as acknowledged by Peter Rosengren in his chapter, there have also been periods of corruption when the Church and its clergy have placed their own pride and avarice above Christ’s teachings and their duty to serve their flock.

In these times of neo-Marxist inspired, cultural-left ideology there’s no doubt Western civilisation is under attack.  In schools and universities students are taught Australian society is riven with sexism, classism, racism, xenophobia and guilty of heteronormativity.  The arrival of the First Fleet is characterised as an invasion leading to genocide and, as a result of post-colonial theory, woke activists argue the curriculum must be cleansed of ‘whiteness’.

Illustrated by the attacks on Israel Folau and Margaret Court and the vitriolic and malicious attacks on Cardinal George Pell for supposed crimes never committed, it’s obvious Christianity is also threatened.  Governments enact laws limiting religious freedom, critics argue there is no place for Christianity in the public policy and faith based schools attacked for upholding their religious teachings.

As argued by Wanda Skowronska, such attacks have their origins in the French Revolution and the rise of radical, nihilistiic secularism and more recently the establishment of the Frankfurt School in Germany during the late 1920s.  Cultural Marxists, drawing on critical theory, argue that in order to win the revolution activists must take the long march through the institutions.

Christianity Matters In These Troubled Times (edited by Dr Kevin Donnelly) will be launched in Sydney Thursday, May 19, at 6.00 pm by Tony Abbott.  Tickets and copies of the anthology are available at the website of the Page Research Centre

10 thoughts on “Many Good Words for the Christian Tradition”

The Left’s War on Faith

Three Chanukah Cheers for the Maccabees