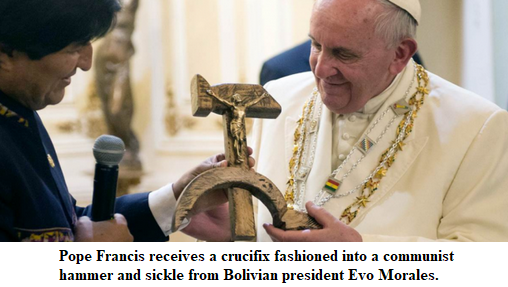 The Black Book of Communism claims approximately 94 million people have been killed as a result of Marxist inspired communism, a figure that does not include the additional millions imprisoned, tortured, left destitute and intimidated into obedience and silence. While not as deadly, equally as insidious and destructive is the impact of Marxism and its more recent manifestation, neo-Marxism, on the ability to embrace a spiritual and transcendent sense of life.  Add the impact of what the Italian philosopher Augusto Del Noce condemns as “scientism and the technological society” and any sense of the sublime and the mystical is lost.

For those committed to Marxism and neo-Marxism, religion is the opium of the masses and any trace of the spiritual and mystical must be eradicated if capitalism is to be overthrown and the workers’ paradise achieved. Adherents believe there is no after life as the only reality that exists is to be found on this earth.  How people define themselves, find purpose in life and interact is determined by the capitalist superstructure that permeates society and controls their lives. Marxism defines people as economic animals where their energy and resources must be directed at overthrowing capitalism and gaining material freedom and independence. The City of Man replaces the City of God, and it should not surprise, beginning with the French Revolution, that one of the first actions taken by revolutionaries is to secularise society by banning religion, destroying the churches and imprisoning and killing the clergy.

As detailed by Del Noce in Towards a New Totalitarianism closely associated with the destructive and deadening influence of Marxism is scientism — the belief that science is “the only valid form of knowledge” and that empiricism based on rationality and reason is the only way to find wisdom, fulfillment and truth”. While not denying the benefits of science, De Noce warns against what is described as a totalitarian conception of  science.  A restricted definition where “every other knowledge – metaphysical or religious – expresses only subjective reactions.” What cannot be objectively proven is condemned as superstition and witchcraft.  Whether unravelling the mysteries of the universe, splitting the atom, putting a man on the moon or creating life in vitro, it is preached that mankind as a result of science and technology has become the master of his own fate.

In opposition to Marxism and scientism George Weigel argues to be human is to thirst for a spiritual and transcendent sense of the world.  Existential questions about the meaning of life, what constitutes fulfilment and happiness and how best to lead a moral and virtuous life cannot be answered by Das Capital, the Communist Manifesto and the periodic table. Weigel in The Cube and Cathedral writes “the deepest currents of history are spiritual and cultural, rather than political and economic”.  Instead of economic determinism, Weigel argues history is driven by culture. Humanity is motivated by “what men and women honor, cherish, and worship; by what societies deem to be pure, good and noble; by what expressions they give to those convictions in language, literature, and the arts; by what individuals and societies are willing to stake their lives on.”

To illustrate, Weigel refers to the way Poland survived, even after years of being erased from the map and then being overrun by fascism and communism, with its national identity intact.  Weigel writes, “Poland prevailed because of culture”; a culture with a distinctive language and literature and imbued with a deep and lasting commitment to Christianity. What Christianity provides, also illustrated by Poland’s Solidarity movement, is the belief man does not live by bread alone and, as all are made in God’s image, every person has an inherent right to freedom of religion and freedom of conscience.

Christianity also teaches utopia cannot be found in this world, that man’s perception is limited and fallible and that cultivating one’s spirit and a sense of the transcendent is equally, if not more important, than meeting one’s physical needs.  It’s no accident the most sublime and beautiful works of art, sculpture, music and literature are inspired by religion and a sense of the eternal. To listen to Rachmaninov’s Vespers Op 37  or Bach’s Mass in B minor, to stand before Michelangelo’s Pieta or to gaze at the Sistine Chapel and Notre Dame’s stained glass windows is to be transported to a world of the ethereal and the divine.

As argued by Pope John Paul II in Fides Et Ratio it is also vital to realise faith and reason are not mutually exclusive but instead are “like two wings on which the human spirit rises to the contemplation of truth; and God has placed in the human heart a desire to know the truth—in a word, to know himself—so that, by knowing and loving God, men and women may also come to the fullness of truth about themselves.”

Albert Einstein, while not committed to a particular religion, also suggests rationality and reason cannot fully explain the mystery that is the world in which we live.  Einstein wrote, “The most beautiful experience we have is the mysterious.  It is the fundamental emotion which stands at the cradle of true art and true science. Who does not know it and can no longer wonder, no longer marvel, is as good as dead, and his eyes are dimmed”.

What Marxism and scientism offer is a drab, soulless and uninspiring view of man’s nature and the world in which we live and is yet to come.  As noted by William Blake “He who sees the Infinite in all things sees God. He who sees the Ratio only sees himself.”