The Masks That Blind Us 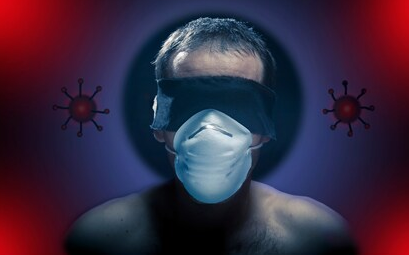 These are frightening times. Sizeable numbers of our population, including apparently most of our political leaders, are clearly terrified of COVID. This is becoming increasingly obvious in public places, where the mood is subtly changing: people are afraid of each other and show their fear not only by their avoidance of contact but in their faces, or they are angry and rebellious.

Am I imagining this, or do some people look at you in the supermarket aisles as if you were the enemy, a potential killer even? More frightening than the disease itself is this social response.The gung-ho ‘we’re all in this together’ spirit of a few months ago seems to be waning.

The media doesn’t help. We are constantly being given grim figures about the number of the dead, figures that are rarely placed in context. For example, we are fed daily information about the mounting death toll in the US, without regard to the size of the US population: in fact the death rate, expressed as a proportion of the population, is well below that of the UK and several other western European countries. By comparison the Australian statistics are so low as to be virtually off-scale, yet our politicians make extraordinary comparisons with other catastrophic events.

This is the worst thing that has ever happened to us as a nation, our leaders will tell us, comparable in its awfulness to the world wars and the Spanish flu, leaving out the horrors of polio (who remembers that now?) and the dangers of a world without antibiotics. Yes, we should all be more discerning in our reading, but not everyone can be: we are reaping a whirlwind.

The failure of our schools to teach history and logical thinking means that young people particularly are ill equipped to process the information they are fed. They accept the narrative, knowing that economic and social catastrophe will no doubt ensue, but convinced that the price is worth paying.

All this in a world largely without faith. Tragically few nowadays have any lingering confidence in the providential goodness of God. Science alone carries the mantle of divinity but it will be shown to be a poor substitute for the real thing. It is itself divided: there is by no means universal agreement on the nature of the COVID threat or the best means of dealing with it, but public opinion demands radical measures and more moderate voices go unheeded.

When the COVID crisis began, the Save the Children Fund attempted to break into the dominant narrative and point out that 15,000 children die every day because of hunger. All those thousands of unnecessary deaths every day in a world wealthy enough to spend billions of dollars on making life safer for the relatively fortunate people of privileged societies! If the COVID emergency had moved our international agencies sufficiently, as caring human beings, to take even a few steps towards reducing this appalling statistic we could feel that the fear and suffering had not been in vain, but sadly there is little sign of change. Children in the less fortunate regions of the world will still die, regardless of whether or not we find a vaccine to safeguard the rest of us.

There is much irony in this. Governments that are increasingly comfortable with the notion of pre-natal infanticide and euthanasia are showing a touching concern for the survival of people in their twilight years. I suppose we should be grateful for their good will, but excuse me if I am sceptical. A world that has lost its Faith, that puts all its trust in human ingenuity and all its hope in prolonging the healthy lives of its preferred citizens, is heading helter-skelter towards a moral abyss. God grant that we find the wisdom to see the full extent of the dangers we are facing.

The Perfect Novel For Our Postmodern Age