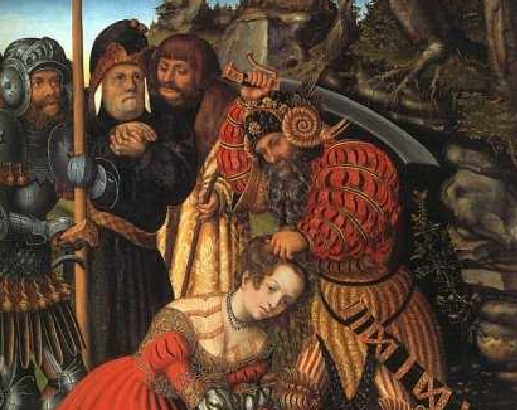 Be astonished: a beautiful woman, beheaded 1,700 years ago, lives on. She is the patron of miners, tunnellers, armourers, military engineers, artillerymen, gunsmiths and those who handle explosives. People put up her effigy at the entrance to tunnels and mines, and seek her protection against thunder and lightning. She supports geo-scientific studies in Germany.

Before going further, a warning: this essay may upset some readers. It contains violence and religious themes. It contains extraordinary events that modern science cannot reproduce and professional historians cannot verify. Nevertheless, the events in the woman’s story are symbols of what lies underneath. Dig deeper, and the nuggets become visible. Clean off the soil, and they gleam with the richness of her story and you may sense why she is still alive today.

Barbara grew up around 300 AD, leading a sheltered life as the beautiful only child of Dioscorus, a rich and illustrious man in Heliopolis, the city of the sun, in Syria, now known as Baalbek. The city, where temples of 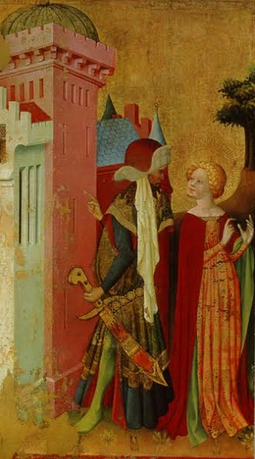 Bacchus and Jupiter still remain, was a battleground between pagans and Christians. Apparently, the Emperor Constantine found it necessary some years later ‘to outlaw the ancient local custom of prostitution both before and even after wedlock’. If so, it is no surprise that Dioscorus had built a tower in which Barbara lived, hidden from the rest of the world, lest strangers see her beauty. Only pagan teachers could go up to instruct her. The purpose of the tower was, like staking a tomato plant in the garden, to raise her body until ripe for a husband to pick her, yet imprison her spirit until it was root-bound.

High up, Barbara consoled herself by looking out at the surrounding wooded hills, flowing rivers and well-watered meadows by day and gazing at the stars by night. The world she saw made her wonder about its beginning and its cause. An important philosophical argument proposes that everything that begins to exist has a cause, that the universe itself began to exist, and so the universe itself has a cause. She began to wonder if the idols her father worshipped could have been the cause of the universe. These idols represented limited gods: they fought each other, they used human beings and animals to fight their battles and breed their offspring. Their favour or hatred was fickle and fallible. Barbara could not imagine them, or any one of them, as the creator. She began to believe that a creator would have to be eternal, outside time and space, or else it too would have had a beginning and been caused. Perhaps this eternal Cause had free will, and, like a person, pronounced a blessing that created space, time and energy in the complex relationships that formed and maintained the universe.

Below her tower and her philosophical reflections, people in the city gossiped about Dioscorus’s beautiful daughter and many offers of marriage were made to her, all of which she refused. She had decided to remain a virgin and devote herself to knowing God, a vow she seems to have kept to herself. Dioscorus, mortified at the prospect of having no heirs, loosened his restrictions on Barbara’s life, letting her choose her own friends. Little did he know that she soon found the company of some young Christian women. They told her about the Creator of the world and the Word made Flesh. Their Biblical prophets had explored Barbara’s philosophical questions, albeit in the language of religion. The Old Testament begins with a single creator, God, who far excelled the pagan gods. It shows the people of Israel wrestling with Him. He made demands of His people that they found difficult to meet. Pagan gods often reappeared as tempters or conquerors, yet the Hebrews still trusted Him. The New Testament showed Christians wrestling to understand and follow the life and teachings of Christ, God incarnate, who brought humanity and divinity together. He showed the way: sacrifice yourself, and God will live in you. To that end, Barbara was baptised by a priest who came to the city in secret.

Meanwhile, unaware of his daughter’s conversion, Dioscorus was having a luxurious bathhouse constructed, designed with two windows on the south side to let in the light. (Remember, we are in the northern hemisphere.) The works were still in progress when he was called away on business. Barbara got a third window put in, to make a trinity of light. With her finger, she traced the sign of the cross on a marble wall which became deeply etched into the stone. The waters of the bath acquired great healing power. The third window, the deep-etched cross and the healing power of water all refer to Christ. The window lets in the Light of the world, the cross is the sign of his sacrifice and the water is the promise of healing through baptism. Barbara’s changes were plain and clear. There was going to be trouble when her father got home.

Sure enough, Dioscorus despised the changes to the bathhouse. Barbara had to confess that she changed the plans, inspired by her Christian faith and her rejection of pagan idols. Given her other confessions, it was also time to tell her father about her vow of chastity. She had completely turned around the purpose of her father’s tower: she would confine her body to herself but cultivate her mind. Thwarted and contradicted, her father flew into a rage and grabbed his sword. Do we dare imagine how he might have plunged it into her body?

She rushed out of the house with her father in pursuit. She came to a hill, which opened up and hid her in a crevice. An escape had taken hold of her and carried her into the earth, as happens to all who depart this life. It brought her back to light and life again. Though her path was still set on a journey to suffering and death, cast away from humanity, Christ was to join her before she died. A path led upwards to a sheltering cave. The same hill blocked her father’s way, and he lost sight of his rebellious daughter. A French version of the story says the floor of her father’s house broke away and carried her to a mountain peak. An old Norse version says a wall opened up through which she reached the mountain. Her passage through a hill, a rock floor or a stone wall to emerge on the other side of a mountain, is the hope of everyone who works in mines and tunnels. It makes sense of her patronage of mining, tunnelling and geology. 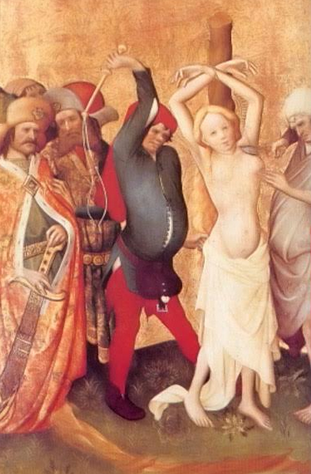 After a long and fruitless search, Dioscorus spotted two shepherds on the hill and asked if they had seen his daughter. One of them betrayed her, leading Dioscorus to Barbara’s cave. The father dragged her back to his house, beat her and tried to starve her into renouncing her faith, without success. So he brought her before the city prefect and denounced her as a Christian. The prefect gave her a choice: sacrifice to the pagan idols or suffer torture. She refused to sacrifice so she faced the time of trial. They whipped her with rawhide and rubbed her wounds to aggravate her pain. Alone in the night she asked Christ for help, and he healed her. They burned her flesh, and at night Christ comforted her.

The city prefect and her vengeful father unleashed new cruelties. Some accounts speak of hooks driven through her body and of clubs bashing her body and head. Next, her breasts were cut off and she was paraded naked through the city streets, until Christ covered her with a shimmering robe. The amputation of Barbara’s breasts was a torment inflicted on many women martyrs, a degendering of her body. What man would marry a mutilated woman unable to nourish her babies? Her exposure naked to the crowd was a further humiliation. Her body, which as a person she could choose to give or withhold, was taken from her and made common property in a ritual spoiling of her virginity. Through her betrayal, torture and degradation she shared in Christ’s suffering, trial and final sacrament. His shimmering veil dazzled the eyes of jeering onlookers, restored her honour and reclothed her as His radiant bride. Her self-sacrifice won her the greatest prize.

Finally, Barbara’s father beheaded her. His fury at her conversion, his conniving at her torture and his killing of his child re-enacted the sacrifice of children practised in the pagan world. In bestial rage, he was both like a bull and like Moloch, the bull-headed god whose raging furnace consumed the children. Her father, her murderer, did not live long. From on high, Dioscorus was destroyed in an act of god. Lightning struck him dead, and, by some accounts, fire totally consumed his body and wind dispersed his ashes. Thus St Barbara became the protectress against lightning and thunder. Artillerymen claimed Barbara as their patron saint; the powder storage room of a French warship is still called Sainte-Barbe. Her father’s death extended the reach of her name, while his is remembered only for his crime. By virtue of her martyrdom, Barbara became a saint. In her icons, paintings and effigies she carries a tower, the high observatory she made in the tower of her confinement, from where she saw the world and wondered about its cause. 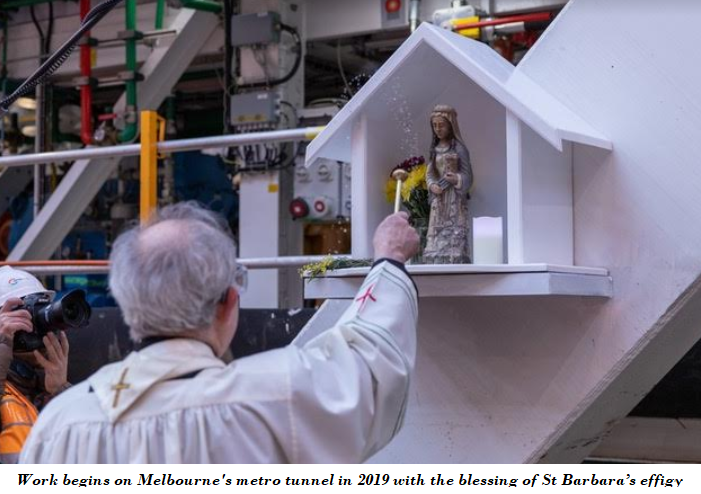 SAINT BARBARA‘s story struck a chord. She had brains and spunk. While she was quarantined in the tower, she thought about what she saw and asked important questions. When she was let out, she found people to help her. She dared to change the bathhouse, she made Christ’s mark on it and told the truth to her father. During her ordeal, she prayed to Christ for help. He healed, comforted and clothed her. He promised that those who remembered her sufferings would be saved from sudden death, and would not leave this life without the benefit of the Holy Mysteries of Christ. A French story says even the decapitated heads of criminals who had remembered Saint Barbara did not finally die until they received the last rites of the Church. Through her, the worst sinners could still hope for reconciliation.

Her story travelled throughout Christendom: northwards to Constantinople, into Russia and the domains of the Norsemen, westwards to Italy, Spain and Portugal, up to France and the Germanic principalities, and over the Channel to England. It accompanied people leaving Europe for the United States and the European colonies.

Her story has survived to this day. People still pray for her help, seek her protection and admire her steadfast faith. Others do not believe in her extraordinary story and doubt that she even existed. Archaeologists and historians may never find a ‘historical’ Barbara. If they do, she would probably be stripped of her shimmering veil, denied Christ’s comfort during her tortures and deprived of her startling escape from her furious father. The ‘historical’ Barbara might be simply a woman killed for believing in Christ, like others in Baalbek whom we do not know. Only the extraordinary story has kept her alive. It alone offers a glimpse into the mysteries of existence, suffering and hope.

For the main story of Barbara, see the Greek Orthodox account, a church which still actively venerates her https://www.oca.org/saints/lives/2020/12/04/103472-greatmartyr-barbara-and-martyr-juliana-at-heliopolis-in-syria

For paganism and monotheism in the Old Testament, see Dr Christine Hayes, ‘The Hebrew Bible in Its Ancient Near Eastern Setting: Biblical Religion in Context’, Yale lectures, 2012, at https://www.youtube.com/watch?v=wRPqtGywkCw&t=702s