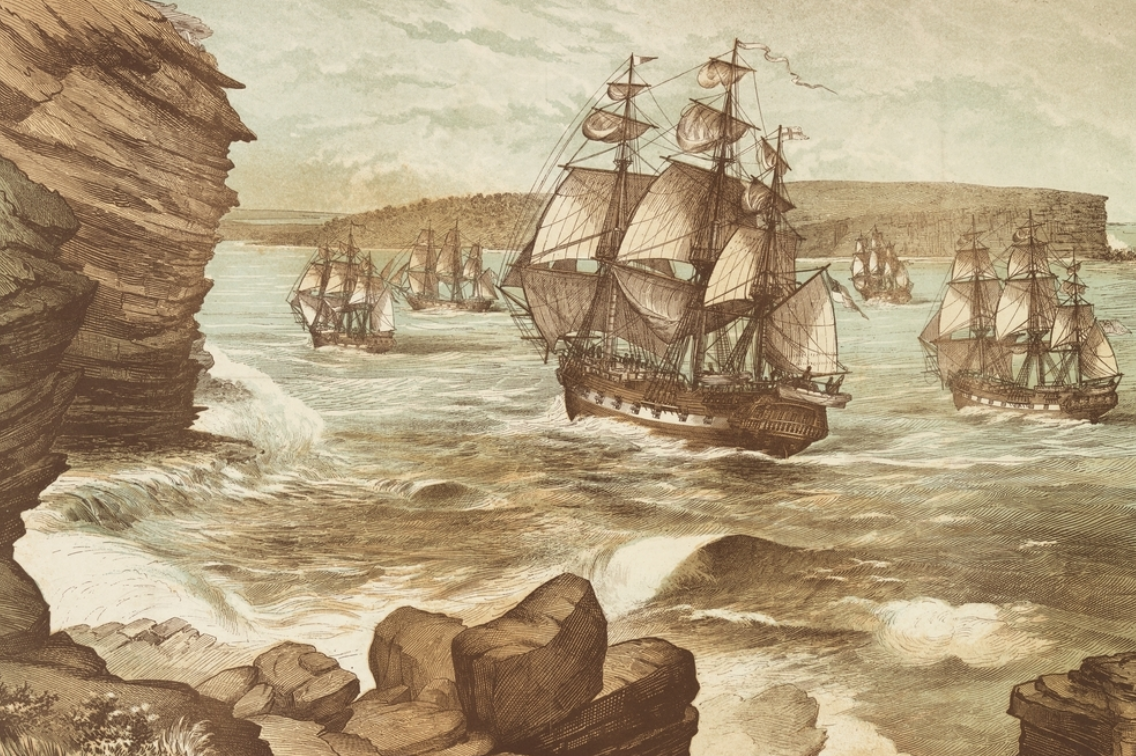 An amazing, but little remarked, fact in the current concern about securing Australia’s borders – cue ‘Operation Sovereign Borders’ – is that they are entirely maritime.  We have no land borders, and Australia is the largest country in the world not to have any.  According to Geoscience Australia, we have a coastline of almost 60,000 kilometres (mainland plus islands).  The perimeter of our territorial waters is probably longer, and the outer edge of our exclusive economic zone (EEZ) longer again.  Back on shore we have, of course, state borders, and we once built a rabbit-proof fence over thousands of kilometres of outback, but only at sea do we share international borders with other countries (PNG Indonesia and East Timor).

Australia is the only inhabited continent that is not criss-crossed with international boundaries and a patchwork of nation states.  Not for us razor-wire fences, concrete barriers, guard-posts, check-points, manned border-crossings, heavily armed border patrols, disputed terrain.  We are one country, one nation, spanning an entire continent and its offshore islands.  The shape is so iconic, so much the image of our country, that we take it for granted.

This essay was first published  in January 2017. It is reprised because, in what is now the annual Australia Day festival of grievance, wrath and twisted history, a little truth doesn’t go astray

It is pertinent to ask how this happy situation came about.  It was not, it must be said, anything to do with the first inhabitants, the Aborigines and Torres Strait islanders.  Whilst they had spread across the entire continent and adjacent islands, and shared a nomadic hunter-gatherer existence, they were divided into around hundreds of separate tribal groups, each with its own traditions, customs, language and territory, with which there was a strong and deep affinity.  Whilst there was, of course, contact between adjacent groups, it is doubtful whether there was any knowledge of, or affinity with, groups beyond this range of contacts, with those living on the other side of the continent.  Nor is it likely that the first inhabitants had any concept of the country, of the continent, of Australia, in its entirety.  This awareness could only come in the modern era.

It was the British, at the end of the eighteenth century, who changed all that.  It was an Englishman, Arthur Phillip, who with a small ceremony on the shore of Botany Bay on 26 January, 1788, began the annexation of the continent for the British Crown.  It was another Englishman, Matthew Flinders, who first circumnavigated the continent and revealed in detail its size and shape, and it was he who bestowed upon it the name Australia.  In just a mere 113 years after Arthur Phillip established the first British settlement at Sydney Cove, Australia became a united sovereign nation, taking its own place in the world.  This it achieved freely, and with the encouragement and consent of Britain.  There was no ‘throwing off of the British yolk’, no need for an independence struggle.  The heroes of Australia’s nationhood were not resistance leaders or freedom fighters, but politicians and statesmen, most now forgotten or only half-remembered.

From the moment of Phillip’s annexation Australia became part of the British Empire, and through this the Anglosphere, that group of English-speaking countries that subscribe to the same values and share the same heritage of democratic institutions, parliamentary system of government, separation of church and state, equality before the law, respect for private property, strong civil society, protection of basic freedoms.  It has been upon this base that Australians, old and new, have built our remarkably prosperous, free, open, tolerant, outward-looking, progressive and enterprising way of life.  It is this bedrock, not the continent’s great wealth of natural resources, that makes Australia a ‘lucky country’.

It is, of course an article of faith amongst Aboriginal activists and the grievance industry generally to see things in a different, much darker, more doom-laden way, to view the running up of the Union Jack by Phillip on that day as the beginning of the end, the start of an invasion, one that would lead to the subjugation of the first inhabitants and the destruction of their culture and way of life.

What this view overlooks, of course, is that such an ‘invasion’, or even a succession of them, was inevitable.  On no other continent have the original inhabitants been successful in holding on to their lands and traditional ways of life.  Through waves of invasion, conquest, migration, settlement, by people ever more technologically and organisationally advanced, similarly nomadic hunter-gatherers either adapted, or were forced into ever more remote, inaccessible and inhospitable terrain, as in Asia, Africa and the Americas, or driven to extinction, as in Europe and the Middle-East,.  What is remarkable in the case of Australia is that it hadn’t happened earlier, and that the first inhabitants were able to enjoy their idyll for as long as they did.

So it if hadn’t been the British, it would have been someone else, or a bunch of others, contesting the terrain, carving it up, claiming it as their own.  Given the location of ‘the Great South Land’, there was, however, only a shortlist of likely contenders, with the requisite technological and organisational capacity, the global reach and the territorial ambitions, to accomplish the feat, either on a full-scale or piecemeal basis.

No-one else in the region, the Papuans, the Javanese, the Japanese or the Chinese, for example, felt so inclined or had the logistics to invade the place.  Otherwise, presumably, they would have done so ages before.  Arab traders, who for centuries had conducted business as far east as the spice islands to our north, and who brought their religion with them, apparently never reached these shores or contemplated coming here.  Even the Moluccans, who for a long time had fished and traded along the northern coast, failed to establish any permanent settlements on the Australian mainland.  By the modern era, therefore, it was most likely that it would be a European maritime power that would do it and, of those, there were only four other real contenders – the Portuguese, the Spanish, the Dutch and the French.    As it happened, it was the British.  It was they who brought the country into the global community.

But we could pause, perhaps, to contemplate had it been otherwise.  The Portuguese and the Spanish, of course, had been around Australian waters for hundreds of years before 1788, but did not take the extra step of planting settlements in Australia.   Had they done so, then the country certainly would have been different, and perhaps more akin to Latin America today.  The Spanish and Portuguese had a record for being less enlightened and more despotic colonisers than the British ever were, and their legacy in the lands they did conquer has not been as stable, democratic or economically as successful.  The Dutch were in the East Indies, also, for centuries before, without seriously contemplating colonising the great land to the south.  Had they done so, then perhaps Australian settlement would have been much more like that of the Afrikaaners in South Africa, where they did put down roots, with all that would have entailed, particularly for the original inhabitants.  The French, like the British, were much later on the scene, and had La Perouse not been pipped at the post by Phillip’s First Fleet, then New South Wales, or whatever other name it would have had, could possibly have become French territory.

Many Anglophobes and Francophiles, of course, would perhaps think that would have been a better outcome, but one thing is certain, Australia today would be much more French than it is recognisably British.  The French, of course, have had a different attitude to de-colonization to that of the British.  They, the French, have been most reluctant to give up any of their colonies, and in those in which the locals have not been able to force them out, they remain to this day, as they do in nearby New Caledonia and French Polynesia.  Contemporary Australia is clearly no longer outwardly British, (despite some republican assertions to the contrary). Indeed, it hasn’t been so for some time, and it is difficult to say when it was the British actually left. That would not be the case, I venture, with the French, had the country started out as a colony of France.

The other possibility, already mentioned, is that the continent of Australia could easily have been not a single nation, but one divided into competing European colonies, with all the likelihood of frontier disputes and inter-colonial wars.  Australia was spared this because British claims to the whole continent were never successfully challenged by either the inhabitants or by other European or regional powers.  Not having to share a land border with another nation has bestowed upon us huge benefits, especially in the areas of defence, quarantine, customs, immigration and in terrorism prevention.  Australia is its own customs union, free-trade area and common currency block.  It has only one official language and a unified legal system.  If we think that protecting a sea border is a difficult enough exercise, and that the interstate rivalries and constitutional wrangles that bedevil the federation are often tedious and troublesome, we should spare a thought for what it may have been like had Australia been not one country but many.

So, all in all, the country could have done worse than have Arthur Phillip plant the Union Jack on its soil 226 years ago.  Although they didn’t appreciate it at the time, Phillip probably gave the first inhabitants as good a chance of surviving in, and adapting to, the global world as any ‘invader’ could have given them, and the waves of immigrants that subsequently came, and are still coming, to these shores, a much freer, safer, fairer, equitable, open, tolerant and prosperous place in which to start a new life than might otherwise have been the case.

January 26, 1788, is well worth commemorating, and celebrating, as Australia’s Day.

61 thoughts on “Why Australia Day Matters”

The ABC, Rotten To Its Red-Raggin’ Core