CPAC and its No-Show ‘Conservatives’ 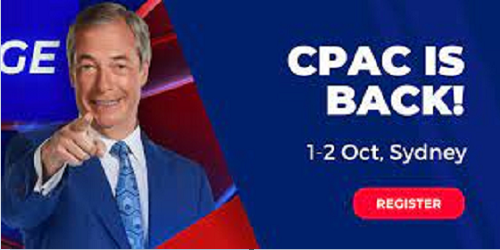 Just back from CPAC 2022 and thought I’d share a few highlights.

In fact, incredibly, the whole show – the Conservative Political Action Conference, remember – started with a low light.  Yes, you guessed it.  They gave us an Aboriginal song and dance routine followed by a ‘welcome to country’. I’d like to say that, at its conclusion, you could have heard a pin drop. Not quite, but the applause was so tepid, it was probably touch and go.

Not so for the follow-up act which first sang ‘We are Australian’ and followed that with a full-throated rendition, on the part of all attending, of the National Anthem.

Senator Jacinta Price kicked off the real proceedings and was greeted with a rapturous standing ovation when she arrived on-stage, a reception she justified by then delivering a powerful address.

Tony Abbott delivered the keynote address and was also given an enthusiastic greeting, which prompted him to lament that more of the attendees did not live in the electorate of Warringah.  During the pandemic hysteria, Abbott was very circumspect in his treatment of the disastrous decisions made by the Morrison government while it was still in office, and more credit to him for that, but he clearly no longer feels constrained and made some cogent points.

After lunch, we were treated to a recorded message of support from NSW Premier Dominic Perrottet, which was greeted with a boos and catcalls.

We then heard former Extinction Rebellion member Zion Lights advance a very convincing case for the use of nuclear energy for providing base load power to back up renewables, but, inexplicably, she failed to take the logical next step which suggests that if we adopt nuclear we will not need renewables at all.  Nuclear, being emissions free, could simply replace the 24/7 coal-fired plants that have served us so well for so long.

Michael Schellenberger, author of Apocalypse Never, came next and did not disappoint with his withering demolition of the green playbook, which can be summarised as ‘everything the greens do to supposedly protect the environment is wrong’.  This was a real highlight of the day, and if you haven’t read Apocalypse Never, do yourself a favour.

Senator Matt Canavan did not disappoint.  His message was pretty much what he always says (but there is merit in that) and it was delivered with his usual devastating logic.

The afternoon included useful presentations from Senator Alex Antic, Mathew Whitaker (former Attorney-General under Donald Trump), Daniel Wild from the IPA and Nick Cater.  And, of course, Nigel Farage was as entertaining as usual and provided another highlight later in the afternoon.

DAY TWO commenced inauspiciously for me personally when some bloke on the train I was in, decided to have a psychotic episode.  I was in the upper level of the main carriage and he was in the vestibule section behind me.  It started out as loud muttering, proceeded to shouting and abuse and ended up with physical violence as the man smashed the walls with his fists and I think also with his head.  At that point I decided discretion as the better part of valour and moved to another carriage.  I did not think this warranted a 000 call, so I decided to call the NSW Police Transport Command.  After what felt like about ten minutes worth of useful information, I was put on hold waiting for the next available operator.  I was still there when the train arrived at Central.  I alighted and heard my fellow traveller do the same.  As far as I could see he was allowed to proceed on his merry way.  Where were all the police, I wondered?

Oh, that’s right.  Most of them were at the Darling Harbour Convention Centre making sure that we CPAC attendees did not provoke, by our mere presence, an outbreak of violence by triggered leftie loonies that had gathered noisily there the day before.  The police presence, which I have no doubt CPAC paid handsomely for, was in attendance both days and must have numbered at least thirty officers.  You might argue that we still have free speech in NSW but it is certainly not gratis.

The day commenced with an entertaining set piece by Mark Latham and Ross Cameron.  They were followed by conservative rapper Zuby.  I didn’t know much about him and was not particularly looking forward to being rapped at by a man in a baseball cap at 9.30 in the morning.  Well shame on me for my preconceptions.  Zuby, clad in suit and sans baseball cap, delivered a very interesting take on 20 characteristics of human behaviour that he believes shape the dystopian world into which we are rapidly descending. He is very articulate and has an interesting life story.  He is an Oxford graduate of whom James Delingpole would approve.

After this we had talks from Warren Mundine (Chairman of CPSAC), Professor James Allan, Jason Miller (founder of social media platform GETTR) on the subject of censorship.

And then Natalya Melnyk gave an informative talk on the recent history of Ukraine.  She made no bones about the chequered nature of Ukrainian governance since independence. Her essential message, delivered as her final point, was that, no matte how flawed the fledgling democracy of her country may be, it does not deserve what Russia is inflicting upon it.

Ian Plimer gave us a truth-telling about CO2 in his usual combative style,. He was followed by Kevin Donelly and Amanda Stoker, who both delivered thoughtful speeches.

But after lunch we were treated to what turned out to be the absolute highlight of the conference.  Topher Field and his team delivered a presentation on his award-winning documentary Battleground Melbourne (watch it here) There were four presenters (not all of whose names I remember) each of whom released their stories in short bursts throughout the presentation, which was powerful, professional and profoundly moving.

This time you could have heard a pin drop right up until the rousing standing ovation.

The whole conference was streamed live by ADH TV and I urge reader to check out this presentation on-line – about 2pm on day two.

I bailed out at afternoon-tea time, hoping to beat the NRL Grand Final rush.

Although a lot of the material was stuff we have all heard before, there were some new insights gained and the chance to hear the speakers live and interact with them to some extent was valuable.

The programme was intense. The morning and afternoon breaks were just long enough to attend the calls of nature and the speakers followed each other immediately.  Only one speaker offered the chance to pose a few questions and that was Nigel Farage.  Overall, this was a good thing.  It kept the conference moving and, although it denied me the chance to display my own erudition by offering up statements thinly disguised as questions, it also meant I didn’t have to sit through half a dozen other people doing the same thing.

One thing that struck me was that Coalition politicians, supposedly conservative, were conspicuous by their absence.  There were only four currently serving Coalition politicians present, Jacinta Price, Matt Canavan, Alex Antic and Keith Pitt – all Senators.  This was telling because if there was one theme that emerged from CPAC it was that conservatives need to have the courage of their convictions and stand up for what they believe in.  And that’s true, but it seems their elected representatives don’t quite subscribe to that view.

29 thoughts on “CPAC and its No-Show ‘Conservatives’”

Drawn to a Politically Correct Conclusion

Volley of the Dolts