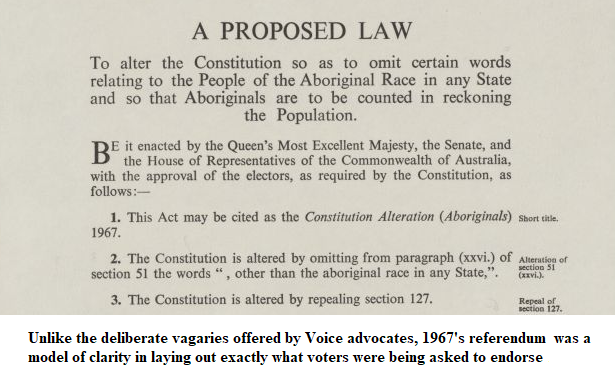 Fools rush in where angels fear to tread is something which I hope doesn’t exactly apply to my derring-do in getting involved in the Voice debate. Keith Windschuttle and others on this site cover the topic so expertly that any contribution I might make is surely redundant. Hello, I’m an erstwhile economist, and everyone knows that economists are polymaths par excellence, at least in their own minds.

I am moved to contribute, outside of my competence, by an article in the Weekend Australian by Mark Leibler. “Want a voice?” he asks. “It should be a simple yes or no.” Apparently, he says, lawfare can be solved by making the constitutional amendment “non-justiciable.” According, that is, to “several [unnamed] … most eminent constitutional lawyers.”

I am reminded of Lavrentiy Beria, head of Stalin’s secret police: “Show me the man and I’ll show you the crime.” Show me what you want the law to say and I’ll find you a lawyer. Personally, as a non-lawyer, I’d question whether anything in the Constitution can be made, as Leibler puts it, ‘non-justiciable’.

In a referendum we have to say ‘yes’ or ‘no’ to something. And, unless, I’ve missed my guess, that something, in this case, has to be a form of words which will enter the Constitution. Surely, it can’t be that we’ll agree to you putting something in later which more or less conveys the position that a Voice must be created. No, it has to be specific.

Here’s a simple one. “Parliament must create an advisory body (chamber?) elected by Aboriginal and Torres Strait Islander peoples and consult such body (chamber) on all questions bearing on the aforesaid peoples.”

You can’t tell me that this form of words will daunt activist lawyers and progressive High-Court justices from having a go at whether the new chamber is properly constituted, has been properly consulted on this or that question or legislation, and/or its views adequately taken into account. It’s naive to think otherwise.

It is interesting to me that Leibler doesn’t provide a form of words that we should say ‘yes’ to. Instead, we get this: “It’s really important that the question be about whether there should be a Voice, not about what sort of Voice.”

What the heck does that mean! It’s snake-oil salesman talk. This ‘ere elixir will make you well. What’s in it? Won’t tell you until you’ve swallowed it.

Leibler refers to the minister for indigenous Australians, Linda Burney. Apparently, so he claims, “she indicated the government’s intention to simply ask the population if it was in favour of the Voice.” I can’t quite grasp that. Even if I were in my cups that wouldn’t ring sensible. As soon as there is any reference to “the Voice” in the Constitution, the hares will start a-running. Can you imagine activist lawyers poring through the Uluru Statement to measure whether the expression given to the Voice by parliament is, and always is, up to scratch? More to the point, can you not imagine it happening?

I’d like to see how they can have it both ways. Keep the question simple and high level and, at the same time, keep legal activism out. It seems to me that the higher level — the more, not the less — will be its susceptibility to activism. For example, in Roe v. Wade in 1973, the US Supreme Court invoked the due process clause in the Fourteenth Amendment as providing a right to privacy which, in turn, protected a woman’s right to an abortion. You couldn’t make it up; but courts can. Our courts are not immune to bizarre decision-making. The Cardinal Pell case showed that, even if the High Court got it right in the end.

I am not saying that a detailed provision in the Constitution would keep the courts out. Nothing can do that nor should do that. The system of checks and balances is sound, provided the lawyers and judges are sound. There’s the rub in today’s and, I suspect, in tomorrow’s world. Still, detail might constrain courts from being completely footloose.

The problem, too, with this proposed constitutional amendment is that there are so many tricky bits; which, presumably, is why the snake-oil salesmen can’t or don’t want to explain what’s in it. Who will have a vote? Seems to me to be pretty tricky.

I DON’T want to get into race. But when you base the establishment of an advisory chamber of parliament on race, it’s hard to get away from it. Why should someone of full blood not get more of a say than someone with only a smattering of indigenous ancestry? What percentage of DNA will count for voting purposes? I don’t like the questions either. They shouldn’t be asked. They shouldn’t be asked because we should not be contemplating using race as a rite of passage.

How will the new chamber be structured? How many members? How often will elections be held? Bothersome details? Well, such constitutional details, and many more, govern the workings of the House and Senate.

Another tricky bit concerns the matters on which the advisory chamber will deliberate and advise. How is that to be decided and by whom? Will the new chamber have the right to request or demand its voice be heard on any matter; which one of these, if either? What obligation will there be on the Parliament to refer matters to the new chamber? How will that be decided? Will the new chamber be able to at least hold up an act of parliament for specific time, to have a delaying power? Questions, questions.

Never mind such questions, the Leiblers and Burneys say, all will be sorted by the wise powers that be. Pardon us plebs for not quite buying that bill of goods. Of course, there’s detail and there is detail. The Constitution is not fitted for amendments of great detail. On the other hand, new provisions must be detailed enough so people of common sense and goodwill will land on broadly similar interpretations of the referendum’s intent and meaning. At least when first set down.

How The ABC Gets Away With It