Slithering and Pandering on the Road to Ruin 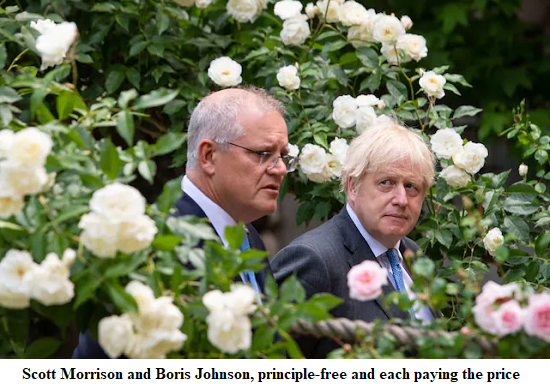 Britain and Australia have quite a bit in common politically at the minute, and each nation’s Tory supporters can learn from the experience of the other.  A little comparison might be in order.

One thing that British Tories can absorb from the May 21 Australian election is that conservative voters like their conservative politicians to be, at least occasionally, conservative.  The Australian Liberals are now largely run by so-called “moderates” (aka Wets) who are progressive, globalist, statist, fiscally incontinent, woke and green.  Conservatives, especially social conservatives and climate sceptics, are railroaded out of an increasingly factionalised party.  COVID sceptics simply did not get a look-in anywhere, with Liberal critics of the COVID State able to be counted on one hand.

The famed Liberal “broad church” of John Howard, who left office in 2007, has all but vanished.  (The recent election, ironically, saw the departure of several of these moderates, defeated in inner-city electorates by even greener, more woke, mainly middle-aged, middle-class women “independents”).  Morrison, while not himself especially green or woke, and incorrectly regarded by some on the left here as a conservative, allowed these leftist factional players and their ideologies to run over the more conservative values which previously had a home with the Liberals.  This saw him abandoned by all.

An enduring lesson of Australian politics is that right wing politicians (and journalists) who attempt to cultivate their ideological opponents never win them over, but always bleed away their own support base.  Differentiate yourself from your opposition, and do so on things that matter to voters, that is key.  Minor parties in Australia have dubbed the two major parties here the Lib-Lab duopoly and similar epithets.  James Allan, borrowing a phrase that I, in turn, borrowed from someone else, has said that the Liberals have not been “Labor-lite”, they have been Labor-heavy.  So too with Boris.  Does anyone in Britain think he is a conservative (whatever else he might be)?  As Allison Pearson tartly observes:

We thought we were voting for Winston Churchill and we got the shifty offspring of Edward Heath and Greta Thunberg.

What Australian Liberals can learn from Boris’s slide into the electoral mire is that, if you cannot be conservative, at least be clear about what you stand for, and be competent at governing.  Clearly Bungling Boris has been none of these.  It has been said, perhaps often, that Boris is good at winning elections but poor at governing.  His potential opponent in a leadership face-off, Jeremy Hunt, is said to be the exact reverse, which doesn’t really help anyone.

What is also interesting and in parallel is that the voters in each of our countries have rejected their Tory masters for a whole range of reasons.  It hasn’t been just one thing.

Modern electorates have become coalitions of voting blocs and the trick to winning and holding office is to continue to make enough of these voting blocs relatively happy with your performance.  This is the interest group theory of democracy popularised (at least in American political science departments in the 1950s) by eminent scholars such as David Truman and Robert A Dahl.  This theory has proven to be robust and persistent, to this day, as an explanation of voting and of election outcomes.  The emergence, expansion and prosperity of industry associations and lobbying firms attests to the veracity of the theory, as does the strength of newly empowered social media political influencers.  Voting blocs traditionally were united by shared economic (class) interests.  Now they are united by shared, often woke, ideologies, and given instant, lethal power by platform technology.

Plainly, neither Johnson nor Morrison have been able to keep any of the tribes happy, let alone all of them.  Allison Pearson’s analysis and her soundings of “real people”, not hand-picked focus-group participants, make it clear that the Tories’ problem is Boris.  Scott Morrison, too, grew to be disliked by just about everyone, one voting block after another.  Conservatives, COVID sceptics, greenies, workers, anti-mandaters, women and Western Australians, whose swing against him was far greater than in the rest of the country, all abandoned him in some measure.  For someone who wanted to be loved by all, Morrison ended up loved by no one.  That is what happens when you stand for nothing and achieve nothing in office that is remotely related to your alleged world view.  It is what happens to slitherers and panderers.  Boris, pay attention!

What struck me about a recent British analysis of the Tory parliamentary tribes aligned against Boris is that six were listed.  This suggests that, just like ScoMo in Australia, Boris is deeply resented by many, for a range of reasons, and has let down the many who had much higher hopes for him. The six factional tribes are, in no particular order – the traditionalists, the one nationers, the 2019ers, the overlooked, the morally outraged and the Scots.  Whether the Tory parliamentary tribes neatly reflect shades of current voter sentiment is another question, but it is, no doubt, a starting-point guide.  And yes, there is a fair bit of internecine warfare and settling of grudges.

And the six seem, surprisingly to me at least, not to include an explicitly anti-COVID Zero tribe.  Perhaps the 100-or-so Tory MPs who courageously voted against earlier efforts by the leadership to extend lockdown/emergency powers were evenly sprinkled across the six identified groups.  Out in Voterland, there must surely be at least some residual resentment of Johnson’s COVID totalitarianism, admittedly not as awful as other places — like Daniel Andrews’ Victoria and Austria, for example — but still ruinous of people’s lives.  And, unlike Australia where our politicians have not been snared by security cameras and snap-happy fellow revellers, Boris made a noose for himself when he demonstrated that he and his fellow partiers did not remotely believe in or accept as binding his own heavy-handed policies.

Australians perhaps did not turn to the freedom-friendly minor parties (FFMPs) in the numbers many would have liked, and the return in terms of seats won was anemic.  Certainly, the election campaign was astonishingly free of any debate about COVID, either in relation to our far higher death rates in 2022, which now largely unremarked, or as a referendum on the earlier insanity of COVID Zero lockdowns and their hideous enforcement.

But several aspects of the election result here do still suggest a concern in Voterland about COVID fascism, something that British Tories pondering Boris’s future might reflect upon.  These include the large number of non-voters, by Australian election standards, the over one million who did actually vote for one of the FFMPs, the astonishing small numbers of first preference votes – in the historically low-to-mid 30 per cent range for both Labor and Liberals.  With a first-past-the-post system in the UK, the Tories should be worried about the possibility of similar anti-major party swings in Britain.  Yes, one can overestimate the degree of popular resentment over COVID measures and mandates, and Australians certainly seem to have simply “moved on” from the  COVID Zero madness of the last two-plus years — this despite the recent and ongoing massive uptick in COVID cases, hospitalisations and deaths. How ironic is this surge in view of the  harsh measures doled out when we really were having a non-pandemic (in 2020-21)!  But do not discount a COVID fascism backlash to add to all the other Boris-hating tribes and his electoral woes.

What matters, as was the case with Scott Morrison, is when they all hate you and for different reasons. That’s when your political goose is well and truly cooked.

There is one last striking parallel between the two countries’ political predicaments.  Both Johnson and Morrison deserve(d) to be punished, and one of the main jobs of elections (and leadership contests) is to afflict bad governments and bad leaders.  Elections are never simply contests between two opposing sides, they are also referenda on government performance.  Not heaving bad governments and awful leaders out of office is simply to reward them for their woeful performance, irrespective of what the incumbents’ backers might say about the quality of the other side (respectively, Jeremy Hunt and the Australian Labor Party).  I see that one of BoJo’s backers is, indeed trying this line (that Jeremy Hunt is Theresa May in trousers, but without the charisma).

Liberal Party backers in Australia ran the same line at the election and did so in spades. The other side may indeed be worse, though in both cases that is open to debate, especially when the other party is untried.  But ultimately it is irrelevant.

So, yes, there are some important lessons to be learned for each of our two countries from the other, as conservative politicians and voters in both Britain and Australia ponder rocky times and much contentious ideological debate ahead.  And if Boris did take steps to reconsider his approach to governing, why would anyone actually believe him?  Morrison promised to change his ways if re-elected.  Apparently not many in Australia believed him either.