Skirting the Matter of Feminism’s Culpability 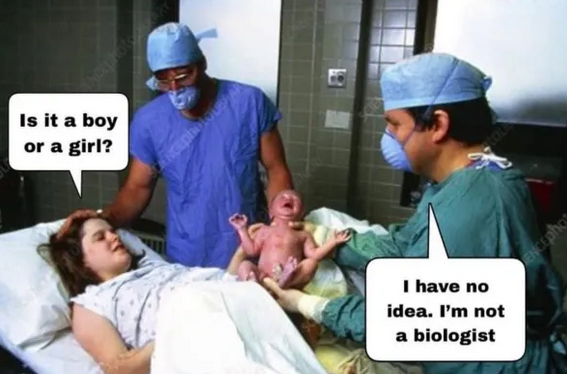 One of the most obvious massage-the-ego ad campaigns of recent memory is L’Oréal’s slogan ‘Because you’re worth it’. Its message is that women should pursue their dreams, which, of course, is a platitude, but the underlying philosophy is one of female entitlement. If you don’t believe this to be true, imagine the reaction by feminists to a slogan with the same premise directed at men. I was reminded of the ad when I read the feminist philosopher Kathleen Stock’s excellent, if uneven, demolition of the logic of transgenderism in Unherd magazine. At the heart of her much-needed essay, though, is a lacunae the size of the Grand Canyon, which, true to feminist form, shifts to men and misogyny the blame for the epistemological collapse occurring in liberal democracies while ignoring the real culprit, feminism. To give an example of this trend, we have recently witnessed the extraordinary spectacle of a likely American Supreme Court judge declining to inform a US Senate confirmation hearing what a woman is, this refusal based on the fact that she is “not a biologist”.

The lacunae, to put it in simple terms, is that feminists can’t view anything without seeing their own reflection looking back at them. It’s all about them, even when the issue in contention is something that affects the despised male half of the population as much as it affects women. A new metaphysical understanding of the world, though, based on irrational postmodern philosophy, is not gender specific. If our understanding of the world changes, men, as well as women, are affected.

The most serious issue, however, is that feminists are reluctant to admit it was feminism which weaponised postmodernism and launched the irrationalism that underpins the crisis engulfing our institutions. And it was feminism’s ‘sisterhood’ concept which stopped traditional feminists of every stripe from calling out the anti-reason and anti-science madness when it first became fashionable in academia. It is admirable that feminists are finally addressing the ‘gendered social constructivist’ philosophy that is the main driver of the current madness, but it is intellectually and morally dishonest to pretend they are not responsible for the crisis. Ideas, to be clear, have consequences and irrational ideas have negative consequences, even feminist ones, which have unfortunately become the shibboleths of the twenty-first century.

Marx famously said that ‘history repeats itself, first as tragedy, second as farce’. Much of modern feminist history can be summed up in Marx’s pithy insight. Feminism’s rise began in the shadow of the Age of Reason and its anti-rational philosophy can be viewed as the sign of a culture in decline. Feminism can also, moreover, be understood as a warning of the danger of good intentions when denied the counterweight of intellectual rigour. We now have a generation of entitled young people, to give an example of feminist pedagogy, with no concept that their dogmatic opinions are — ironically, considering feminism’s embrace of Derrida’s philosophy — binary adolescent nonsense. The epitome of black-and-white thinking, in other words.

Feminism is both the cause and the effect of this situation. What began as the belief women are entitled to the same rights as men transmogrified into a rejection of reason, common sense and tradition, without qualification, across our institutions.

How did this happen? The answer is simple: it’s the politics of envy, what Nietzsche called ressentiment. Because men have traditionally been the creators of art, science, engineering, philosophy (pick any field of human endeavour), feminists latched on to the one philosophy that rejected every form of human accomplishment, postmodernism, in an intellectually dishonest attempt to create a female intellectual tradition.

Explaining why females were stymied throughout history because of biology, childbearing and being physically weaker than men, and how things will be different in the future, was not enough for feminists. They had to rewrite the past as a patriarchal conspiracy against women, and what better way to accomplish this agenda than to use the illogical philosophies of Derrida, Foucault, Baudrillard, etc., whose ideas can be crudely summed up in one all-encompassing idea: there is no such thing as truth or, at best, truth is relative. What feminists did with the philosophy, however, was to disingenuously reject truths they didn’t like and substitute feminist ideology as a new metaphysics. It was politics masquerading as philosophical principle. When feminist domination of third-level education became absolute, the ideology was channelled through academia, first in the humanities and social sciences, and then throughout the university system, to the point where we now  called upon to view even physics through a social justice lens.

To give two examples of irrational ideas from the feminist criticism of science and reason (they are legion), Luce Irigaray argued that E = MC2 is a ‘sexed equation’ and Sandra Harding called Isaac Newton’s Principia Mathematica ‘a rape manual’. The same approach, for example, inspires the feminist reading of art history. Because there are no female Michelangelos, Leonardo Da Vincis or Picassos, feminists claimed that quilts are as important to art, relatively speaking, as the Sistine Chapel, the Mona Lisa and Guernica. 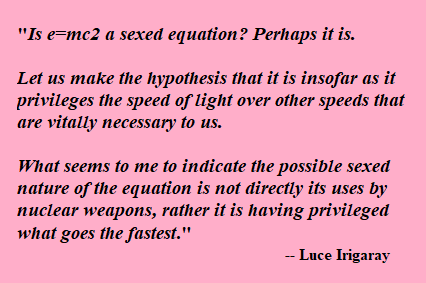 I give science and art as two examples of feminist ‘theory’, but every discipline has been framed by the same skew-eyed epistemological lens, distorted or destroyed. The irony is that feminists never saw that the same ‘logic’ would be applied to their ideas and that the notion of what a woman is, and what rights she is entitled to, would eventually, like nemesis on steroids, return to bite the progenitors of the theory and confuse the minds of a generation about the difference between biological sex and culturally derived gender.

How, you ask, have feminists tried to divert attention from their responsibility for the current malaise after a 40-year campaign to control third-level education, thus the minds of teachers and their students and hence of society? Again the answer is simple. By diverting attention from the philosophy and claiming that women are disproportionately, unlike men, affected by transgenderism and also by falling back on the old reliable — that everything is ‘misogyny’. These ideas, though, to put this in perspective, are partial truths.

There are two reasons why ‘male spaces’ are not under threat the way women’s spaces are. The first is biology. Men’s upper body strength is 40 to 60 per cent higher than female upper body strength. No matter how many push-ups a transman (a woman who identifies as a man) like Elliot Page does, the threat to men in changing rooms, toilets, and prisons from transmen (or women competing in male sports) is minimal. The opposite is true for women. Transwomen (men who identify as female) retain their upper body strength and are a physical threat to women in female spaces. Men, of course, are also responsible for most rapes and sexual assaults, so caution and prudence rather than idealised compassion are common sense.

The second reason is one that Kathleen Stock, Helen Joyce and other transgender critical feminists skirt, which is that many female rights are privileges granted to women that are not granted to men. Men can’t abstain from something they were never given. And they can’t be held responsible because female privileges are under attack by the trans movement. It’s not misogyny; it’s reality. Men don’t need the privileges afforded to women because female rights and privileges are based on the imbalance in physical strength between men and women. Women also give birth and menstruate, which are added burdens. You can’t argue for privileges, justified privileges in my view, and then claim that only women are being treated badly around the issue of transgenderism because female rights are being eroded, and that it’s misogyny because men aren’t being treated the same way. It’s what Paula Wright has called, in another context, “the feminist two-step”: women are the same as men, but they need help because they’re not the same as men. Describing this as misogyny would mean that every imbalance in physical and intellectual difference between people is now a form of discrimination or hate speech.

Feminism, as Nietzsche said of all ideologies, looks at the world with a squint and sees what it wants to see, and it is incapable of comprehending the world in its full complexity because it’s impossible. Creating the world according to an idealised vision is always a disaster for individual dignity and human rights. We’re reaping the whirlwind of feminist empathy, compassion and ‘knowledges’, which is the postmodern rejection of reason. It’s not a pretty sight.

A quote from W. B. Yeats is apposite to explain the current moment.

That twenty centuries of stoney sleep
Were vexed to nightmare by a rocking cradle,
And what rough beast, its hour come round at last,
Slouches towards Bethlehem to be born?

Feminists have only themselves to blame for the bizarre anti-rational world we’re inhabiting. It’s time for feminists to take responsibility for their actions. Feminist leadership, we’re constantly told, is more mature and empathetic than the ‘toxic masculinity’ of men. Prove it. Admit feminism was wrong to focus on anything other than equality before the law and equality of opportunity for women, then apologise and move on.