Of Oranges, Balls and Sexual Shape-Shifting 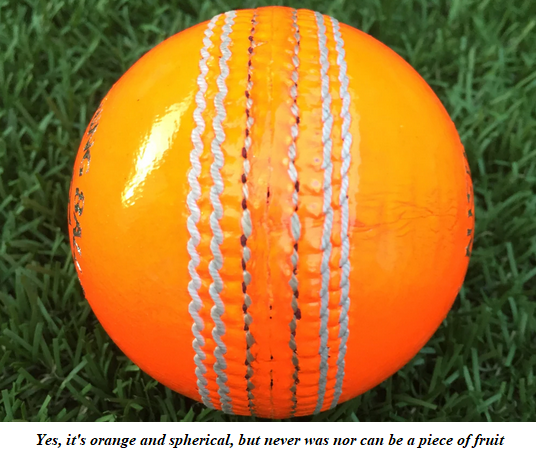 A boy or girl, the parents asked? Well, the doctor averred, ‘Baby has a penis. Boy or girl? We’ll have to wait and see.’

That’s about where we are, I understand. But it isn’t so, is it? Those outside of relatively few loud-mouthed transgender cranks, the intimidated commentariat and woke elites aren’t following the bizarre script and never will. We, the great unwashed, easily distinguish between boys and girls.

Mind you, I’m sympathetic to prominent people being unwilling to try to define what a woman is; which seems to be the question of the moment posed by conservatives to embarrass lefties. To wit, Ketanji Brown Jackson put on the spot in the US Senate hearings.

If I had my wits about me, when asked the question, I’d say males have an X and Y sex chromosome pairing while females have an XX. But I might well forget which is which, if caught by surprise. Like forgetting the unemployment rate. And, I have no real idea what a chromosome is so wouldn’t want to be interrogated. I looked it up in my OED: “a thread like structure of nucleic acids and protein found in the nuclei of most living cells, carrying genetic information in in the form of genes.” OK, still double Dutch.

UK Opposition Leader Keir Starmer got into trouble for refusing to acknowledge that a woman can’t have a penis. That’s a little more problematic than being unable to define a woman. He should watch the 1990 Arnold Schwarzenegger movie Kindergarten Cop, in which it’s made clear that “boys have a penis and girls have a vagina.” Now that’s one way to answer the question asked of Ms Jackson. But you can understand why this might not do in polite company. And it’s unthinkable that any remake of the movie (apropos the sequel in 2016) would include that kind of dialogue.

It can be nebulous to define something by its characteristics, yet that’s usually all that we have. We usually define things by the way that they look, their dimensions, what they’re made of, and what they do or are used for. Thus, roughly speaking, a cricket ball is a spherical object of specified weight and circumference, made of a core of cork, layered with tightly wound string, covered by a leather case. It is used in the game of cricket.

An orange, however perfectively spherical, could not be mistaken for a cricket ball. We would all know the difference. And, if we were initially fooled, a bowled ball or two would reveal the truth. Functionality is the ultimate arbiter. If an eccentric neighbour insisted that his orange was in fact a cricket ball, we might let it pass out of kindness but would not go so far as to actually use it in a cricket match.

When it comes to defining a woman, we have no other resort than to look for characteristics. I’ve mentioned chromosomes, but that’s no use for general purposes. Women tend to be smaller than men, less strong and fast, but more flexible. Women are shapelier, shall we say, and have finer features, are more pleasant on the eye, are less bodily hirsute but more often than not have more hair on the top of their heads than men when older. Clearly these superficial characteristics, and others like them, are subject to such wide variation that they are inconclusive.

From an outward perspective external genitalia are pretty conclusive; back to Kindergarten Cop. But, when all is said and done, functionality is the sine qua non both of a cricket ball and of sexual identity. When the rubber hits the road, as it were.

Women have bodily parts which allow them to nurture life. Only women can be pregnant. Only men have bodily parts which allows them to create sperm cells with which to fertilise egg cells within the fallopian tubes of women. Men don’t have fallopian tubes, nor ovaries for that matter. So, there we are. Men and women are quite different in their functionality and never the twain shall meet. Not quite.

Sometimes, rarely, nature makes mistakes and, for example, babies are born with external genitalia of both sexes. But this is not part of the debate. The debate concerns those born unambiguously male who believe they should be female; and those born female who think they should be male. And good luck to them if they are adults and want to swap. Live and let live. Apply Christian kindness and consideration. And don’t throw stones.

The debate has two parts. One is the extent to which children should be allowed to have medical treatments to change their outward sexual characteristics. I quite understand that getting in before puberty is advantageous. At the same time, it seems monumentally unsafe to undertake any such irreversible treatments on children who might be mentally off balance and who, in any event, are incapable of making mature decisions. I could be wrong, and there might possibly be exceptions, but it seems like child abuse to me.

The second part of the debate largely concerns transgender women (including post-puberty, older-age teenagers) wanting to occupy women-only spaces and/or compete in women’s sports. Recently the American swimmer Lia Thomas has been in the news, and Welsh cyclist Emily Bridges too. Both are in their early twenties; both previously competed as males before undertaking hormone treatment.

They are simply the latest in line to receive publicity. I have previously written in QoL about Fallon Fox who had six UFC fights between 2012 and 2014. “Her” last opponent Tamikka Brents didn’t fare too well. It was reported that she suffered a concussion, an orbital bone fracture, and needed seven staples to her head, all from the first and only round. Other things equal, men are much stronger than women, hormone treatment or not. Women being maimed and killed in the interests of inclusivity might be a bridge too far. Do ya think?

You might recall the New Zealand weight lifter Laurel (formerly Gavin) Hubbard. This is how one newspaper (SMH, November 2017) reported her position: “The 39-year-old was a national junior record-holder in the male 105kg class before transitioning in her mid-30s. Rival [women] athletes complained that she had an unfair advantage.” I bet they did.

And there was Hannah Mouncey in 2018, cleared at the time by the AFL to play women’s Aussie Rules. This is from the Daily Mail: “Previously known as Callum before her transition, Mouncey was part of the national men’s handball side which competed to qualify for the Rio Olympics. She stood at 190cm tall and a muscular 100kg.” Go, girl.

Women’s sports is a different matter. Transgender women should not be allowed to compete under any circumstances. In an honourable world it would be self-policing. Men who would be women would be shamefaced about competing against biological women. I can only think that one possible unfortunate side effect of hormone treatment is a loss of self-respect.

In Memory of Bill Leak