The Graceless Princess and the PM 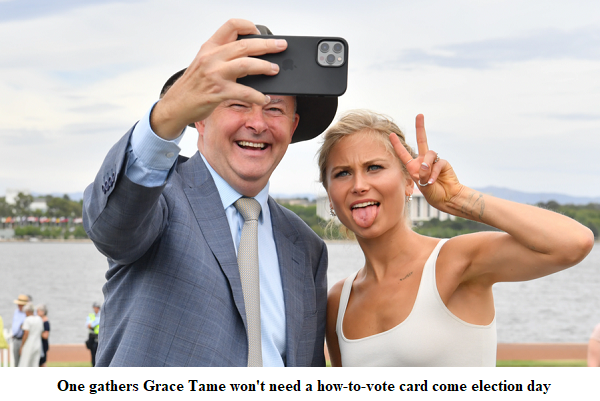 I could not bring myself to watch the Tame/Higgins Press Club address, but I have read Tame’s speech — and harrowing reading it was too.  For what it’s worth, she has my sincere sympathy for what she went through.

But I did watch the clip of her revealing the ‘bombshell’ that she had received a threatening phone call in August last year from a ‘senior person in a government funded organisation’, warning her off criticising PM Scott Morrison in the lead up to the 2022 AOTY announcement.  Here is the transcription:

Brace yourselves. On the 17th August last year, not five months after being named Australian of the Year, I received a threatening phone call from a senior member of a government funded organisation asking for my word that I wouldn’t say anything damning about the Prime Minister on the evening of the next Australian of the Year awards.  You’re an influential person.  He’ll have a fear, they said.

A fear, what kind of fear I asked myself.  A fear for our nation’s most vulnerable?  A fear for the future of our planet?  And then I heard the words, ‘You know, with an election coming soon.’  And it crystallized.  A fear for himself and no-one else.  A fear that he might lose his position.  Or, more to the point, his power.  Sound familiar to anyone?  Well it does to me.

As I watched it, Shakespeare came inevitably to mind. One of his plays.  What was it?  Ah yes, ‘The Taming of the Shrew’.   And lest I am thought to be a vile misogynist, I hasten to add it is just the curious coincidence of the surname and the apparent personality that struck me.  And, continuing the theatrical theme, my other thought was that Princess Graceless could certainly use some acting lessons. The manic delivery of her lines served only to highlight their absurdity.  And I guess the AOTY does exert some influence for a short period of time but to posit that she was influential enough to affect the outcome of the election in any significant way, suggests an ego that definitely belongs on the stage.

I wonder what the threat was?  To strip her of her award?   What else could they do, I wonder? And how prescient of that unnamed official to divine that Tame might just make clear her dislike of Morrison, although he probably didn’t realize it would be by means of a boorish and petulant display rather than explicit words.

It turns out the organisation in question is possibly the National Australia Day Council, which has denied making the call.   Yeah right, they would say that wouldn’t they?  We all know how these QUANGOs are infested with hate-filled conservatives just itching to be of service to Scott Morrison.

It is quite possible, Tame already having proven a divisive AOTY, that such a call was made, but it would have made purely with the intent of protecting the image of the Australian of the Year award.  They might have asked her to tone down her rhetoric and stop acting in such an obviously partisan political way.  And it probably had nothing to do with the 2022 event, but rather her conduct in general.  It beggars belief that someone in this position would be actively campaigning for Morrison.  And Tame would know that.

Morrison, of course has denied, instigating that call and Women’s Affairs Minister Ruston has promised an investigation.  But that doesn’t suit Tame, who tweeted:

Scott conducting an investigation into who made the phone call is THE VERY SAME embedded structural silencing culture that drove the call in the first place and misses the point entirely.

Stop deflecting, Scott. It’s not about the person who made the call. It’s the fact they felt like they had to do it.

I suspect the last thing Tame wants is to be answering questions such as ‘Well, who was it then?’  So her cover will be that she does not want to make this poor sap a scapegoat for Morrison’s malevolence.

I imagine, given all she has been through, that I might be castigated for speaking of Tame in this way.  She was made Australian of the Year not in celebration of her victimhood, but in recognition of her achievement in overcoming it.   But she has weaponised that victimhood and turned it on Scott Morrison.  I am no particular fan of Morrison but he deserves better than this, and so does Australia.

I began this piece with Shakespeare.  Let me conclude by paraphrasing him.  What a piece of work!

29 thoughts on “The Graceless Princess and the PM”