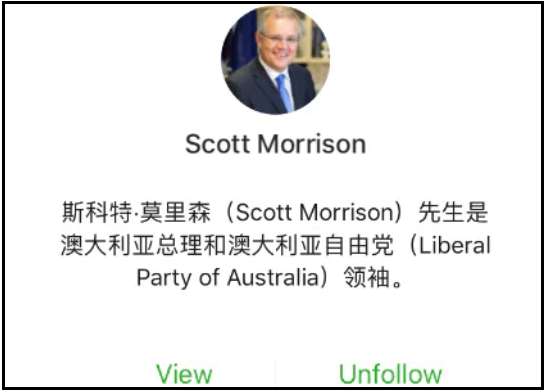 When news broke over the weekend that Scott Morrison’s WeChat account had been hacked, hijacked, or otherwise compromised, the China hawks instantly swooped. Liberal MPs, whose WeChat accounts were mostly dormant anyway, pledged to boycott the platform. Anthony Albanese, who only got on WeChat last year, was vague about whether or not he would get off (WeChat, that is; no one doubts that he is enjoying the controversy). The PM seems to have been circumspect in his comments, but that didn’t stop Senator James Paterson blaming the Chinese government: “It is very clearly a Chinese government action in my view.”

He may be right. But he may be wrong. Morrison apparently contracted out the management of his WeChat site to a Chinese agency, which assigned or hired a Chinese individual known only as “Mr. Ji” to register the account in his own name and run it on the PM’s behalf. The agency was presumably also tasked with building the PM’s Chinese-language following in Australia, though no details on this have yet emerged. What we do know is that a Chinese businessman named Huang Aipeng apparently bought the account back in November—and no one seems to have noticed until now.

Mr. Huang quite credibly claims that he bought the 75,000-follower account in order to obtain a ready-made marketing list of Chinese-speakers in Australia. China panic aside, there seems no reason to doubt him. What became of Mr. Ji is, at this point, anyone’s guess. For all we know, he was the grandfather of the doorman at the agency hired by the PM’s publicity people. Given the ubiquity and indispensability of a WeChat account for people in China, and the fact that strict Chinese rules would have prevented Mr. Ji from obtaining a separate personal account, he was most likely an elderly shut-in who had no need to communicate online or make electronic transactions.

The whole sordid episode just goes to show how inauthentic Australia’s establishment institutions are in dealing with China and Chinese-Australians. It’s not hard to imagine a political operative telling the PM that he needed a Chinese-language communications strategy, then hiring an overseas agent to set things up, paying a penny a head for 75,000 followers. It’s the same with universities: they don’t connect with prospective Chinese students; they have agencies recruit on their behalf. Lacking the expertise or even the interest to genuinely connect with Chinese people and Chinese-Australians, Australia’s elite institutions treat them as little more than check marks on a to-do list.

Chinese-Australians, and even Chinese people in China itself, deserve better. If Australian institutions want to reach out to recent immigrants, they should reach out to the million or so Chinese-born Australians to work with them in facilitating the development of real relationships. These recent immigrants speak Chinese and understand China, often all too well. They are likely to be sceptical about the Chinese Communist Party and savvy to its propaganda. If they used WeChat to reach their compatriots here in Australia, they would know to be very careful in how they did it. It’s not the PM who has been disserved in the WeChat debacle. It’s the Chinese-Australians he should be relying on to manage his Chinese-language media.

A Case of Patent Absurdities

My Bedside Joy: A Gentleman in Moscow