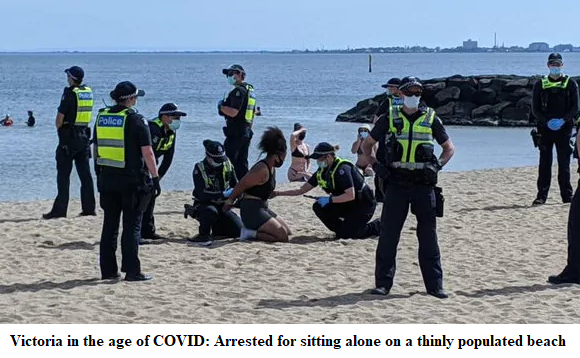 Earlier this month I wrote this on the NewCatallaxy blog:

Freedom Day last Wednesday. Had coffee in a café for the first time in, I don’t know, five months, was it? Had lunch in a restaurant the next day. Oh joy, free at last! My club even let me in on Friday to use the gym. When will this freedom ever end? Well, it could end tomorrow, of course, if Perrottet is panicked by dire predictions from NSW health minister Brad Hazzard or by chief health officer Kerry Chant. Methinks I shouldn’t make plans too far ahead, when hysterics have the ear of Dear Leader.

The first comment from a reader could be read as taking issue with my sentiment:

Freedom Day is fake concocted bullshit that makes me particularly outraged. I was free the day I was born into this world. Never forget what they have taken away from us.

I’ve expressed similar outrage. Our freedoms to speak freely, to assemble, to travel, to engage in the ordinary business of life are God-given, I’ve written. So they are, but rulers and governments can take them away, as they have throughout most of history. The people of Hong Kong are feeling it now, as are the women in Afghanistan, as did the East Germans before the wall came down, as did dissenters in revolutionary France.

But wait, there is no need for the past or foreign parts in order to tell the tale. Lest we forget: remember the pregnant lady in Ballarat handcuffed and hauled away for exercising her free speech via a Facebook post; the peaceful protestors in Melbourne bombarded with rubber bullets; and the middle-aged lady knocked to the ground and pepper sprayed in her face from close range by a male police officer, sworn to protect her, for daring to object to the rules made on high.

America’s founders had it right in 1791, in drawing up the Bill of Rights; the first ten amendments to the Constitution. All of these amendments had to do with protecting the individual citizen from government. How can that be? Elected by the people, for the people. It can be so because many of those seeking political power are corrupt. Their goal isn’t to serve the public, it’s to wield power. They have what amounts to personality disorders. This has to be recognised and countered as America’s  Founding Fathers tried to do. Unfortunately, as the virus has shown, they didn’t try hard enough. And that certainly applies in Australia and in most regions and countries now laughingly making up what used to be called the Free World.

Normally, when selecting people for occupations which allow them to carry truncheons, guns and other means of exerting power, we recognise that bad eggs might apply. Police forces and armed forces are the prime examples of such occupations. Measures are put in place to spot and weed out thugs and psychopaths. Obviously, this is by no means foolproof, as the police thuggery in Victoria showed. Nevertheless, society is aware of the problem. It’s about time we all started to be aware of the much greater problem of dysfunctionality among politicians. And, accordingly, supported new iron-clad constitutional restraints on their power.

You might have caught yourself saying: I couldn’t tout myself, compromise and genuflect, for years on end, before party branches, party bigwigs and then out on the hustings in a desperate bid to grasp the prized seat. Of course you couldn’t. But then you don’t have the same lust for power over your fellows. You just want to get on with a productive and fruitful life as best you’re able.

These people who represent us, more likely than not, are not like us at all. You see the problem. We’re being represented by the unrepresentable. Doubt this, then think about the premiers of Victoria, WA and Queensland. Who could they ever elect to represent them? King George III in his latter days?

I made the mistake of looking forward to Perrottet becoming premier. I mistook him for one of us. Immediately he extends the tenure of vaccine passports. On a dime he switched last week from living with the virus to COVID-panic mode. For some reason not borne out by science or logic, or even hospital admissions and deaths, I have to wear a completely useless mask again inside the foyers and lifts of my apartment building and when shopping etc. QR codes are back. Disobey and these are some of the penalties determined by diktat by those who we elect to serve our interests:

For breaching a public health order. In the case of an individual, the maximum penalty is $11,000, or imprisonment for 6 months, or both and a further $5500 penalty may apply for each day the offence continues. The NSW Police may also issue on-the-spot fines to individuals of

But annoying inconveniences and ridiculously onerous penalties are simply the tip of a fetid iceberg. They get nowhere near the sheer unadulterated despotism of vaccine mandates. It’s reasonable to prevent those suffering from a deadly transmissible disease from interacting with others socially and at the workplace. Now, imagine if you can, a situation – and it’s barely imaginable – in which a healthy unvaccinated person is excluded from interacting, while a sick and contagious vaccinated person (Typhoid Bill, so to speak) faces no obstacles. That’s silly. Couldn’t happen.

Well it is happening. It’s rife. Most of those contracting the virus and passing it on are vaccinated.

Those identified as close contacts and spending the (Merry) Christmas season in isolation should understand that those with whom they have come into contact will almost certainly have been fully vaccinated. Surely pollies can figure that out? Apparently not.

Should have mentioned. Many politicians are not simply power hungry, they seem to be short of enquiring and logical minds. That too might come with the territory.