The Much-Wed Queen of the Mounting Yard 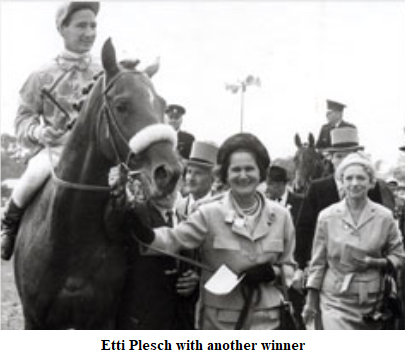 In all the madness that is – or used be – Melbourne Cup Day, I am reminded of the life of Etti Plesch, a Hungarian countess, born Maria Anna Paula Ferdinandine von Wurmbrand-Stuppach in 1914. Etti had the distinction of marrying six times and winning the English Derby twice. Her record at the altar made the late Susan Renouf a veritable novice while her success, as a woman, on the track was unrivalled.  Her six spouses — three counts, two American millionaires, and a Hungarian billionaire — notched up a bewildering twenty weddings between them. More grooms than Gai Waterhouse.

Etti had almost completed her memoir when she died in 2003, and she had the good fortune to have had the biographer Hugo Vickers edit it with precision and panache. The result Horses and Husbands: The Memoirs of Etti Plesch (Dovecote Press, 2007) is better than a few hours spent in the Birdcage and every bit as good as an 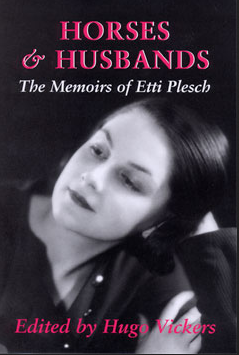 Etti was raised in Vienna and Moravia. The Wurmbrands were noble Austrians from Styria, but Etti was thought to be the natural daughter of Count Josef Gizycki, a dashing figure described by Etti’s mother, May, as “amoral and cynical, but he was a marvellous lover.”

Her putative father divorced May when Etti was four. “After the divorce I do not think we ever saw him again.”  At ten, she was diagnosed with tuberculosis and spent two years at the Waltzaner Sanatorium in Davos, later made famous by Thomas Mann’s The Magic Mountain.

Her grandmother was swindled by her administrator, who claimed he had found oil on her Moldavian estate, leaving her extravagant mother with no choice but to find a rich husband for Etti. When she was 17 she fell in love with a Viennese boy called Count Vladschi Mittrovsky, but Etti was forbidden from marrying him because he suffered from a rare blood disease. Her friend Marjorie Oelrichs (later Mrs Eddy Duchin) took her to New York. There she met and married railway heir Clendennin Ryan III. Their marriage lasted all of three months, principally because Etti still pined for her first love, Count Vladschi Mittrovsky. She had ordered a Cartier watch and had it inscribed to Vlad but they sent it to her husband as Etti had charged it to his account.

Etti left the United State for Europe in ignominy but soon met and wed Hungarian Count Paul Palffy (Pali); Etti was the fourth of his eight wives They lived in some style in Slovakia, traveling and happily slaughtering everything in sight, tigers, stags, elephants, and antelopes, until Pali met the Parisienne poet and femme fatale, Louise de Vilmorin, for whom he divorced Etti to marry.

Etti then wed another Hungarian count, Tommy Esterhazy. They hunted and traveled and Etti had her only child by him,  Marie-Anna Berta Felicie Johanna Ghislaine Theodora Huberta Georgina Helene Genoveva (“Bunny”).  But four years later, while Etti was away, Louise struck again and eloped with Tommy only tio have the war intervene before they could marry. They never did. When the Soviets ‘liberated’ Hungary from the Nazis, Tommy lost everything, including his 300-square-mile estate and was imprisoned. When eventually freed in 1945 he arrived, penniless and disheveled, at Louise’s door in Paris. She looked at him and said, “Un Esterházy n’est pas exportable.”

Etti’s next two husbands were the Austrian Count Sigismund Berchtold and then another American, William Deering Davis of Chicago. That one never had a chance, as her memoir records, “This time I had agreed to marry in order to have somebody with me. Now I did have him with me – and far too much. What could be done? I could not just kill him. If I asked for a divorce, he would refuse, as there were no other women, nor even men in his life. I thought, and thought …’

Thought a lot about his dietary habits in particular: “He preferred a light American dinner, some hamburgers and 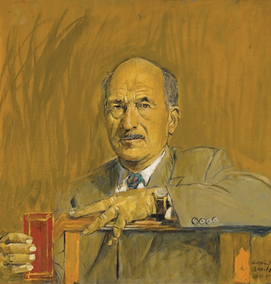 deep-frozen vegetables at home rather than spending a lot of money in restaurants,”

In 1954, she hit the jackpot with Dr Arpad Plesch (left), a Hungarian of Jewish extraction and one of the richest men in the world. He had married his mistress of twenty years and on her death he wed her daughter, Marysia (the grandmother of Arpad Busson, the father of Elle McPherson’s two sons). In 1953 he divorced the impossibly promiscuous Marysia.

It was said, although Vickers does not vouch for it, that Etti was staying at Claridges and asked the hall porter to identify the richest guest. It was Dr Plesch. When she discovered he was a gardener she bought a book on gardens and traveled up and down in the lift until she met him.   The source of Arpad’s wealth was the subject of much speculation and suspicion but with it Etti was able to live in the manner that she had long sought to be accustomed. While Arpad collected rare botanical texts and kept a rarer still collection of pornography, Etti took to acquiring horseflesh.

With her lifelong knowledge and respect for bloodlines (her grandfather, May’s father, had won the 1876 Derby with Kisper) combined with Arpad’s fortune, she won the Epsom Derby with Psidium in 1961 then again in 1980 with Henbit. Another of her horses,  Sassafras, even beat the legendary Nijinsky in the 1970 Prix de l’Arc de Triomphe.

The memoir is full of her mondaine wit and aristocratic hauteur, brimming with a surfeit of husbands and some extraordinary characters (the gloriously titled Princess Fugger is a particular favourite).

I rather think Etti got more pleasure from her horses than any of her husbands.

An Autoerotic Exercise in Aboriginal Art