First Turnbull, then Morrison, next … Albanese? 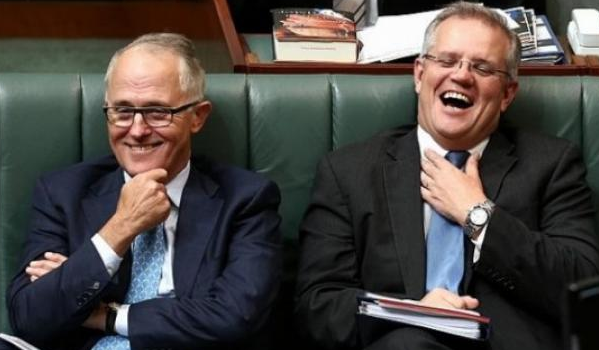 What’s the best basis on which to judge a person?  By what he has done in the past  (actions and past behaviour)?  Or by what he now says and promises  (words)?  I don’t think you have to be a professor of psychology to think that past actions, rather than today’s promises and words, are a better predictor.*  At any rate, as a perspicacious Quadrant reader I suspect you’ll agree with me in thinking that actions count much more than words in judging someone’s likely future conduct.  And that most certainly goes for politicians too.

Think back to 2015.  Was I disappointed in the way Tony Abbott (with, or without, the pushing of a far-more-than-we-knew-at-the-time ‘moderate’ or lefty partyroom) simply gave up on free speech and the attempt to repeal s.18C?  You bet I was.  Did I wish he’d be as hard-headed as a PM as he’d been as an Opposition leader?  Yep, right again.  Did I at any time support a coup that would see Mr. Abbott replaced by Mr. Turnbull?  No.  Never.  All the world could see that Abbott had right-of-centre beliefs because he’d always had them and had acted on them.  Likewise, Mr. Turnbull’s past made him indistinguishable from a stock standard chardonnay-sipping lefty.  At a pinch he could squeeze into the far-left-end of the Liberal Party partyroom.  If you thought PM Abbott was a bit weak on all things freedom and conservative-related, in no sane world was the answer to that problem ‘Mr. Turnbull’.  Only by being sucked in by words, and cheap promises, and adoring ABC coverage could you succumb to that mirage.  I said as much at the time and have never had reason to reconsider.

Meanwhile more than a few 2015 conservative Turnbull supporters have had cause to admit they made a very bad mistake in supporting the defenestration of Abbott, one that still afflicts the Liberal Party to this day.  Some of these 2015 coup supporters have publicly (and admirably) confessed the error of their ways, though many have not.

At any rate, let’s now jump back to the future.  Here we are in 2021 with Prime Minister Scott Morrison.  What do we know about Mr. Morrison’s past actions?  Well, he was intimately involved in the coup against Abbott.  In fact, he was downright sneaky about it, sending all his supporters to Malcolm but voting himself for Tony (knowing that his vote, without theirs, wasn’t enough).  ‘Just the hard world of politics’, I hear some say.

And then there was Mr. Morrison at it again in helping to bring down Turnbull himself.  Sure, all of us can gaze in astonishment at an embittered Malcolm Turnbull, unable to come to terms with being knifed despite the fact that he himself had been the knife-wielding defenestrator extraordinaire of Abbott.  Does the man have no self-awareness at all?  (Don’t answer that; it was a rhetorical question. Anyway, we all know the answer.)  But that said, Malcolm does have a point about ScoMo being involved in his downfall, doesn’t he?

Now as someone who would have sold his soul to get rid of Turnbull as leader of the Liberal Party I was glad to see him go, whatever the machinations involved.  At the time I strongly preferred Peter Dutton.  I thought Dutton as PM would run a principle-based campaign and beat Shorten.  But Morrison had the support of the ‘Turnbull wing’ of the partyroom, which all Liberal Party members by now surely realise is the preponderance of the Coalition MPs.

Morrison went on to win, and then won what the press (not conservatives, but the lefty press) thought was an “unwinnable” 2019 election.  But he did so as a man of no observable values.  He was wholly dismissive of free speech and wider freedom concerns.  His government’s appointments to the courts, the Administrative Affairs Tribunal, public broadcaster, you name it, pretty much just carried on in the Turnbull tradition, though the High Court appointments may prove to be better.  Yet in winning the 2019 election ScoMo was forced to stake out a position against Labor’s net zero ambitions.  Morrison mocked and ridiculed them.  Words, dear readers, simply words.  It now appears that in the course of a couple of years things have changed so drastically that Australia has to do what Morrison only a few months ago said was idiotic and impoverishing.

And that’s what happens when cheap talk is rewarded.  Scott Morrison is a poll-driven politician. That the man can’t get out of bed without seeing what a focus group thinks has become patently clear during these past 20 months of the COVID pandemic. Morrison has done nothing to stand up against despotic premiers.  Nothing whatsoever.  What he did was empower them with his ‘agile, innovative’ National Cabinet, which he created out of thin air.

Dan Andrews has to get the gold medal for most despotic democratic leader in the world throughout these lockdown laden days.  Mr Morrison has not criticised him even once, as far as I know.  Not when Victoria Police were acting as thugs in sneaking up behind a quiet, apparently placid citizen and throwing him to the ground; not when they handcuffed a pregnant woman in her home; not when they knocked an elderly person to the ground and used pepper spray; and not when Melbourne became world’s most locked-down city.  And recall that ScoMo is the man who in the first twenty minutes after a tendentious ABC report can condemn our SAS troops, throw Christine Holgate under a bus, and omit to take the practical steps that would allow Christian Porter to defend himself.  Heck, I don’t recall this Morrison government doing anything about Their ABC, other than appointing the top two people, who have done nothing to tame the national broadcaster’s bias, nepotism, profligacy and secrecy.

Okay, is Morrison as bad as Turnbull?  No.  If you have to choose between the value-free, hollow, poll-driven politician and the one who has beliefs and values but they’re almost all lefty ones, take the former.  But sooner or later the empty suit is going to lose.  And he’ll lose because he alienates the base – because he shares no core beliefs with the party’s core voters.  He won’t alienate them as much as Turnbull did.  But still plenty – a despotic handling of the pandemic; caving in to the inner-city renewables lobby in the party; spending like drunken sailors (save that sailors spend their own money); the list goes on.

Right now my bet for next year’s election is a sizeable Morrison loss.  That supposes that Albanese can keep his mouth shut, not threaten to tax property owners or raise taxes or some such other idiocy.  Just mimic whatever lefty net zero garbage Morrison tries to sell and that should put Albo in The Lodge.   We’ll see.

*Correction to the opening paragraph: Given the state of today’s universities, with their revelling in virtue-signalling and being at the forefront of virtually all of today’s left-leaning pieties, it may well be that the people most likely to value words over actions are in the universities.  Well, maybe the corporate HR types and their woke boards would give the professoriate a run for its money.  And let’s not forget the public service caste which, by-the-by, has not lost a penny of pay throughout this entire despotically mismanaged pandemic.  And Lord knows, there’s the ABC.  Actually, on reflection, I stand corrected.  The psych prof would be in good company.

How the left colonised the ABC