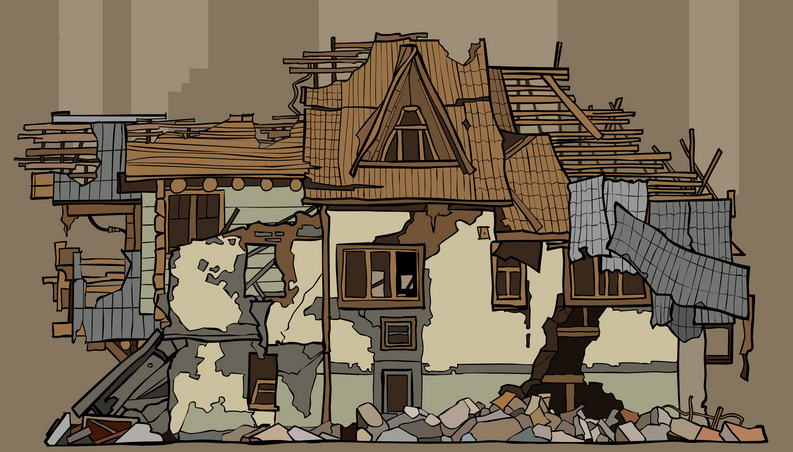 CANBERRA.– The Federal Government has ordered a snap lockout of the nation’s residential and commercial buildings on the advice of the nation’s Chief Engineering Officer (CEO), Professor Bernice Cumbersome. Following the recent Surfside condominium collapse in Florida, Australia’s CEO has announced that the risks are now far too great to allow people to stay in their homes. The snap lockout will come into effect from midnight on Tuesday.

At a press conference in Canberra today alongside Professor Cumbersome, Prime Minister Scott Morrison stated  he could no longer ignore the experts’ advice and the nation must heed their warnings and move to the safety of the outdoors.

“Australian’s have a great love of the outdoors,” he intoned, “so while essential engineering inspections are carried out this will not be too great an inconvenience. This a chance for all of us to get in touch with nature!”

Residents will be permitted to remain on their properties but must camp outside. Those in flats and apartments will be provided with tents to erect in nearby parklands deemed safe from tree fall by the nation’s Chief Arborist Officer. The Chief Sanitation Officer will lead the logistics operation to provide thousands of temporary shower and toilet facilities, while the Chief Plumbing Officer, out of an abundance of caution, will consult the science to determine and enforce the maximum permitted water temperature.

The Government has absolutely no information on the condition and construction of all homes, offices and warehouses across the country and requires this to ensure the safety of all.  No one will be left inside or behind.

We expect to find not only structural defects but poor design, layout, obsolete and outdated materials and non-complying and nonstandard fittings that all lead to increased risk of accidents. We need to be mindful that there are more accidents in the home than any other area of our lives. Hazards in kitchens and garages constitute unacceptable risks and governments must act now to prevent injury. We do not want to see any more Australians hurt in their homes.

Remember, moving out of our homes keeps us in them

The CEO pointed to the recent increase in home renovations as a source of the problem. “How can the public have any confidence in knowing their homes are safe until a government authorised building surveyor inspects their house?

“Sharing building-tip misinformation on Facebook and other social media platforms largely got us into this mess, so we have worked with Big Tech to make sure tinfoil-hat notions about window sashes and skirting boards are taken down.”

Also speaking at the press conference was the Chief Ascetics Officer, Professor Marcia Stewart-Smythe, who indicated mandatory retrofitting and repairs would allow for updating colour schemes and removal of distasteful patterns and textures. “For goodness sake, half the suburbs are painted mission brown and many homes still have flocked wall paper, not to mention girly calendars in their garages.”

The Prime Minister stated that additional funding would be provided to establish the Commonwealth Expert Design Office to oversee and approve renovations and repairs consistent with diversity targets and gender equity. Plumbing’s outdated descriptions of parts as male or female will be retired, replaced by ‘the sticking out bit’ and ‘the come hither bit’. Ballcocks will be banned immediately and forever.

The lockouts were endorsed by the nation’s Chief Geophysicist, Dr Nigella Nomates, who stressed that living outdoors substantially reduces the risk of being killed by an earthquake. Chief Climate Scientist Professor Nancy Panish pointed to a graph linking building collapses and CO2 and noted the link between the two is irrefutable.

“We are past a turning point – the surge of building collapses will begin and get worse if we do nothing about it,” she said. “The chance to use ecologically sound and sustainable renewable materials will boost our carbon credentials with the UN and help us meet our net zero carbon targets.”

Dr Gabriel Tempter, the Chief Indigenous Officer, hailed the move, saying outdoor living was a chance for Australian’s to connect with the nation’s Aboriginal heartland. She was joined by Melbourne University’s Professor of Aboriginal Agriculture Bruce Pascoe, who provided a recipe for native yams which he said was developed and perfected by pre-settlement indigenous scientists as an anti-viral measure. “Not once before Captain ‘Killer’ Cook arrived did COVID disrupt the erection of towns with 1000 homes,” Professor Pascoe said.

Asked how the lockouts would be enforced, the CEO indicated $5000 fines would be issued for noncompliance, with the government encouraging neighbours to keep watch on each other’s movements and attitudes.

Police chiefs across the country said they had the resources to enforce the restrictions but have requested more funds to pay for remote-surveillance drones and cameras. Ankle bracelets with GPS tracking and electro-shock compliance motivators would encourage people to remain outside until permission is granted to return. In Victoria, federal grants will be applied to the purchase of fully automatic, tripod-mounted, plastic bullet machine guns with ranges of up to 500 metres. Deputy Commissioner Pes Planus said these were essential to keep protesters and their phone cameras at a sufficient distance to stop hooligan-control measures being filmed and posted on YouTube under accusatory titles.

Homes of critical and essential workers, plus those of visiting movie stars, football players and their girlfriends would be cleared first and the occupants allowed back before anyone else. But to avoid discrimination the homes of all lower-status Australians would only be re-opened at the completion of the entire program.

When asked how long this would take, the CEO indicated that, based on current staff numbers, the government had confidence in the target date of January 1, 2037, but only if borders remained closed and international and domestic  travel was suspended to avoid unnecessary complications.

The Prime Minister stressed that living in a tent represented only a minor change in the way we live and reminded us that we are all in this together. He was confident Australians would see Zero Risk as a worthwhile objective, do the right thing and, above all, accept without question the advice of authorised experts.

13 thoughts on “‘Staying Outside Keeps Us Inside’”

Where Next for the Coalition?