What’s in Store for the Women of Afghanistan 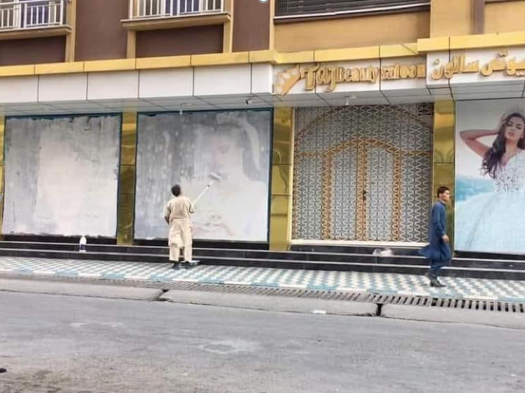 With Afghanistan to all intents and purposes now restored to the Taliban’s control,  the most devastating and tragic impact will be felt by women and girls. As Greg Sheridan has written in The Australian:

Senator Amanda Stoker from Queensland also commented on Facebook, “Afghanistan’s women and children, who are—as shown by the photo (above) of pictures of women being painted out of the public eye—likely to face great suffering in the time ahead.”

The ABC is also reporting:

For Afghan women, their increasing power is terrifying.

In early July, Taliban leaders, who took control of the provinces of Badakhshan and Takhar, issued an order to local religious leaders to provide them with a list of girls over the age of 15 and widows under the age of 45 for “marriage” with Taliban fighters.

If so-called progressives are  true to form, they will gloss over these actions as not representing “true Islam” but of militant extremists. This is anything but the case. What follows is a ten-point summary of what the religion of Islam actually teaches.[1]

The referencing to these primary sources is as follows:

B7, 72, 815 Allah’s curse is on women that either give or receive tattoos; those that pluck their facial hair and those that do anything to alter their natural appearance.

B7, 62, 133 A woman from the Helpers had a daughter whose hair began to fall out soon after she became wed. The woman asked Mohammed his advice saying, “My daughter’s husband suggests that she wear a wig.” Mohammed said, “Don’t let her do that. Allah curse women who wear artificial hair.”

33, 59 O Prophet! Tell your wives and your daughters and the women of the believers to draw their cloaks (veils) all over their bodies … That will be better, that they should be known (as free respectable women) so as not to be annoyed.

4, 34 Men have authority over women because God has made the one superior to the other, and because they spend their wealth to maintain them. Good women are obedient. They guard their unseen parts because God has guarded them. As for those from whom you fear disobedience, admonish them, forsake them in beds apart, and beat them. Then if they obey you, take no further action against them.

4, 11 Allah commands you as regards your children’s (inheritance): to the male, a portion equal to that of two females.

B3, 31, 172 Mohammed: “Is it not a fact that women do not pray or fast during menstruation? That is the deficiency in her religion?”

B1, 6, 301 While on his way to pray, Mohammed passed a group of women and he said, “Ladies, give to charities and donate money to the unfortunate, because I have witnessed that most of the people in Hell are women.

They asked, “Why is that?

He answered, “You swear too much, and you show no gratitude to your husbands. I have never come across anyone more lacking in intelligence, or ignorant of their religion than women. A careful and intelligent man could be misled by many of you.”

They responded, “What exactly are we lacking in intelligence or faith?”

After they affirmed that this was true, Mohammed said, “That illustrates that women are lacking in intelligence. Is it not also true that women may not pray nor fast during their menstrual cycle?” They said that this was also true.

Mohammed then said, “That illustrates that women are (deficient) lacking in their religion.”

M036, 6603 Mohammed: “After I am gone, the biggest threat to stability that will remain is the harm done to men by women.”

B1, 9, 490 I [Aisha, Mohammed’s favourite wife] was told of several things that can negate a prayer. I was told, “Prayer is nullified by a dog, an ass, or a woman that passes before people in prayer.” I said, “You have turned women into dogs.”

2, 226 Women shall with justice have rights similar to those exercised against them, although men have a status above women.

B2, 20, 192 Mohammed: “A woman should not travel for more than three days unless accompanied by her husband, or a man whom she cannot marry, like her father, brother, or grandfather.”

B2, 20, 194 Mohammed: “A woman who believes in Allah and the Day of Reckoning may not travel for more than one day unaccompanied by a close male relative.”

B7, 62, 81 Mohammed said, “the marriage vow most rightly expected to be obeyed is the husband’s right to enjoy the wife’s vagina.”

B7, 62, 121 Mohammed: “If a woman refuse her husband’s request for sex, the angels will curse her through the night.”

B3, 49, 860 A nomad and another man came before Mohammed, seeking his solution to a dispute.

The nomad said to Mohammed, use Islamic law to settle our dispute.” The other man said, “Yes, we will abide by Allah’s law as you dictate.”

The nomad began, “My son worked for this man and he fornicated with the man’s wife. Some people said that he must be stoned to death; to save him from that punishment, I paid a penalty of one hundred sheep and one slave girl. Then I asked some Islamic scholars who said, “Your son must be given one-hundred lashes and be exiled one year.”

Mohammed said, “I will settle this dispute using Allah’s law. Your son must be exiled for one year, and he must be lashed one hundred times. The slave-girl and the one hundred sheep will be returned to you.” Mohammed then turned to the companion and said, “Unais, seize this man’s wife. She must be stoned to death.” Consequently, Unais went and stoned the woman to death.

B5,58,234;B5,58,236;B7,62,64;B7,62,65;B7,62,88;B7,62,90 Mohammed became engaged to Aisha when she was six years old. She then went to Medina and stayed at the home of Bani-al-Harith, where she got ill and lost her hair. After her hair grew back by the age of nine, her mother handed her to the care of some women, who prepared her for her marriage to Mohammed. He consummated his marriage with her when she was nine years old and she remained with him for nine more years until his death.

4, 3 And if you fear that you shall not be able to deal justly with the orphan-girls then marry (other) women of your choice, two, or three, or four.

B7, 62, 130 Abdullah said, “While on jihad with Mohammed, many of us did not have wives accompanying us. We asked whether we should get castrated?” Mohammed ordered us not to do that, and he gave us permission to take temporary wives before reciting this verse.

5.87 O, you who believe, do not forbid the good things that Allah allows you, but do not commit excess for Allah does not love those who commit excess.

It is permissible to have sexual intercourse with a captive woman after she is purified (of menses or delivery). In case she has a husband, her marriage is abrogated after she becomes captive. [Hadith of Muslim, chapter 29, book 8]

B1, 2, 28 Mohammed said, “I have seen the fires of Hell and most of its residents are ungrateful women.” He was asked, “Are they kafirs [unbelievers], or did they show ingratitude to Allah? He answered, “They were not grateful to their husbands and not grateful for the kindness shown to them.”

AS CAN be seen, the religion of Islam is extremely oppressive to women. The withdrawal of the West from Afghanistan should make us all stop and consider: 20 years and trillions of dollars to train and equip a couple of hundred thousand Afghan soldiers … and what did it achieve? The Taliban walked straight back in and will take up where they left off. What this demonstrates is that religious ideology cannot be crushed by a military force. It needs to be replaced with something else.

This is what I believe the West has the most to offer. For the civilisation that it has inherited is of an explicitly Christian kind. Our laws, customs and culture have all been shaped by the Judeo-Christian worldview. And yet we are doing our best to destroy the very thing which has given us such freedom.

Tragically, as Vrinda Narain—an Associate Professor at Canada’s McGill University law school — argues, it seems almost certain that the Taliban will reduce the women and girls of Afghanistan to sexual enslavement. How the leaders of the West respond now is anyone’s guess. In an ominous sign of what’s not to come, US President Joe Biden has no public events on his calendar for tomorrow.

[1] The religion of Islam is founded upon three distinct, but interconnected, sources: The Qur’an (the original Arabic words of revelation that Mohammed received from Allah), the Sira (the biography of Mohammed) and the Hadith (the traditions of Mohammed). A Muslim would also argue that their Scriptures can only be properly understood when read in the original Arabic. For further resources on the topic see the works of Samuel Green and Dr Bill Warner.

Who caused the global economic crisis?

Crowning Absurdity of a Lost Cause