Democracy Isn’t Dead, but it Does Look Wobbly 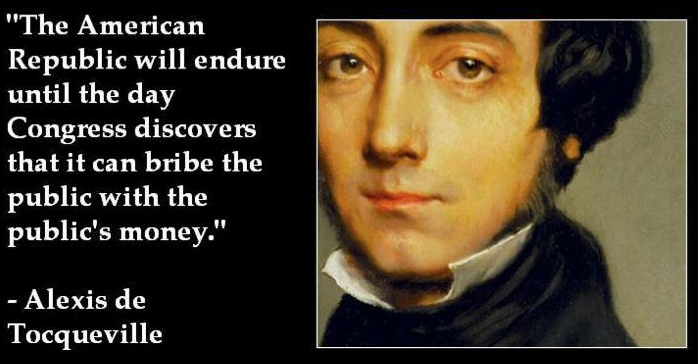 Those words were written nearly two hundred years ago by French diplomat and observer of American democracy Alexis de Tocqueville. Since that time many others have forecast that when those entitled to funding from Treasury outgrow the resources of Treasury, Western democracy fails. I would suggest that Australia is staring into that abyss.

Across the Western world we see voters looking for alternatives to major parties of both left and right, many seeking to get on the gravy train before it runs out of gravy. De Tocqueville’s observation is also relevant in understanding the political landscape developing in Europe, the US and Australia. The populations of Western democracies have seen millions of pages of commentary, along with thousands of hours of TV and the internet’s presumptions to knowledge in regard to our susceptibility to the COVID-19 panic-demic and its economic consequences. As a result, Joe Public has developed a near-schizophrenic condition.

While many live in fear, receptive to official urging that they mask up, bunker down and report to authorities any neighbours not doing likewise, others have  grown increasingly distrustful of government and a mainstream media reporting the latest edicts and restrictions from bended knee. After what is getting on for two years of being told masks work/masks aren’t needed, lockdowns work/no they don’t (just ask Daniel Andrews, still a lockdown lover, despite six ruinously quixotic attempts to eliminate the virus) we are mentally bloated with balderdash while famished for hard facts. Obfuscation on the one hand and  sensational falsehoods and flat-out official idiocy (pizza boxes and footballs are mortal threats) on the other have left us thirsting for truth.

Across the Pacific we see an incoherent, muddle-head administration moving from spendthrift incompetence to debacle and back again, both of which seem to have inspired the Morrison government’s approach. A Commonwealth demand that states open their borders is first taken to court but then abandoned; in effect ordaining the premiers as unchallenged dictators of eight distinct polities divided by checkpoints and show-me-your-papers authority.  Canberra, meanwhile, apes Biden’s even deeper dive into a sea of red ink by running up the national debt to previously unimagined levels, all the while seemingly giving no sign that it grasps, as the sentient members of Cabinet surely must, the dire fiscal and political consequences of its actions.

The mendicants lining up outside our Treasury for their handouts include not just the genuinely needy pauperised by lockdowns but the “I-have-a-grievance” minority groups and members of quasi-scientific collectives who have learnt that the sure path to the further grants on which their conference-attending lifestyles depend must be blazed with preposterous predictions. Also aboard the gravy train are rent-seeking entrepreneurs and green industries, all demanding public funding to save us from their own sensational predictions. Electricity prices soar in step with the subsidies for wind turbines and solar farms while political figures live in fear of a harsh word from doom-burdened schoolchildren who have been taught they are masters of science while being unable to spell or correctly punctuate the angry placards they wave.

What does all this mean for Australia, and how do we develop and prosecute policies that will again make us independent, productive and prosperous?

We’re not alone in these follies, and we must learn from what is happening beyond our shores if we are to avoid blundering down the road to national bankruptcy. Most Western democracies, whether governed by either right or left factions, have gained and stayed in office over at least the last decade by bribing voters and building a sense of entitled access to other people’s money — taxpayer money, to be precise. Convincing voters that their needs, both vital and imagined, can be provided by “My Government” has led to dishonest promises and unscrupulous borrowing. What this policy of endless debt has spawned is the huge growth of bureaucracies and mounting tax burdens on an ever-decreasing percentage of productive citizens. The biggest snouts in the trough of entitlement belong to the governing class and its mendicant courtiers.

The huge debts accrued to fund this nirvana are unlikely ever be repaid, unless by runaway inflation. The reining in of budgets in Europe and Australia, half-heartedly attempted in the wake of the 2008 great financial crisis,  has been discarded. Any amount of money is justified to defeat the dreaded COVID. Locally, Australia’s addiction to debt is propelling us into national penury. Future generations, born into debt, will face hardship and diminished living standards.

The election of Donald Trump gave the American people — many of them, anyway — fresh hope. As a front page  New York Times headline put it on the morning after voters foiled Hillary Clinton’s presumed coronation, “A blue-collar town in decline and in despair turns to Trump”. Then came Biden’s dubious election victory, after which his subsequent missteps have destroyed that hope. Inflation is back, America has been humiliated by the Taliban’s weird beard militias, and all the while the national debt keeps mounting. The mess will be wall-to-wall when all the chickens have come home to roost, and that ordeal-to-come’s repercussions will be felt around the world, including in Australia.

Australia is borrowing some four billion dollars every week just meet the overhead and payroll. Indeed, we are accruing debt at a faster rate than most other Western democracies, a fact never mentioned by the politicians who write the cheques. Can we imagine that behind the closed doors of party rooms there are voices speaking against the tide of profligate folly? One likes to imagine so, but you wouldn’t want to bet on it. Parties have become infested with pole-climbers who gain preselection with the intent of representing not their constituents nor the broader public or even their own convictions (allowing any are present to begin with)  but the party itself. These failing parties and their governments all lack the capacity and will to govern in the national interest and, as a result, have allowed the infection of the bureaucratic controls and regulations sought by lobbyists. Industry is hobbled, opportunities crimped, future prosperity curtailed.

How did we get to this depressing state and how do we correct it?

First, the Fourth Estate, so vital to democracy, came to be dominated by left wing orthodoxies and ideologues given to predicting and defining the news, rather than adhering to truth and reporting events in a balanced and truthful fashion. One need only watch the ABC or read the Fairfax press, especially if the topic is, say, climate change, Aboriginal poverty or same-sex marriage to witness the deference accorded one side’s arguments and a barely concealed contempt for the other. At the various premiers’ morning COVID scare conferences have you ever heard a reporter ask why cheap, off-patent ivermectin has not been embraced, not even reviewed with anything resembling an appropriate urgency? No, that wouldn’t do at all. Authority (“experts” in the parlance of headline writers) has spoken, so there is nothing to emerge from the briefings but stenographic renderings of the various Dear Leaders’ pronouncements, edicts, caprice and, of course, promises of punishment.

The second reason is that this policy propagation by media, rather than elected representatives acting on behalf of their constituents, happened because the defence of truth was deemed no longer possible. We remained mute as relativism came to rule and, more than that, as a society we abandoned the expectation that one of democracy’s key foundations must be observed:  Thou shall not bear false witness, even if only by omission. As the mainstream press fails us, we allow the sensationalism and false claims to go largely unchallenged. That is, perhaps, the distinction between the publicly funded Left, as represented by the ABC, and the rest of us. We work to pay the bills, raise families and be left in peace. The Left, meanwhile, has its expenses covered by the public purse and those entities standing to benefit from its activism. No need to guess which faction gets its runs on the board. Untruths — dying rivers and doomed reefs, for example — become the counterfeit currency of narrow and restricted “debate”, but mostly they are challenged only by the much smaller voices of the relative few who still care.

Speaking personally, I find all this monstrously depressing, but I have not yet given up all hope. It seems to me we are witnessing the burgeoning of a growing revulsion at the fecklessness of the two major parties, a loss of faith in their capacity to govern for the common good. As Ronald Reagan once warned, “Freedom can be lost in one generation”. Should this realisation grow and spread, should it touch a nerve in those who have been cruelled by the lockdowns and appalled at the incoherent arrogance of the leaders who impose them, there is light ahead.

Or am I just a hopeless optimist? There is a comment thread below in which I invite readers to let me know.

13 thoughts on “Democracy Isn’t Dead, but it Does Look Wobbly”

Closing the Books on ‘The Best Which Has Been Thought’