The Battle is Over. The Bad Guys Won 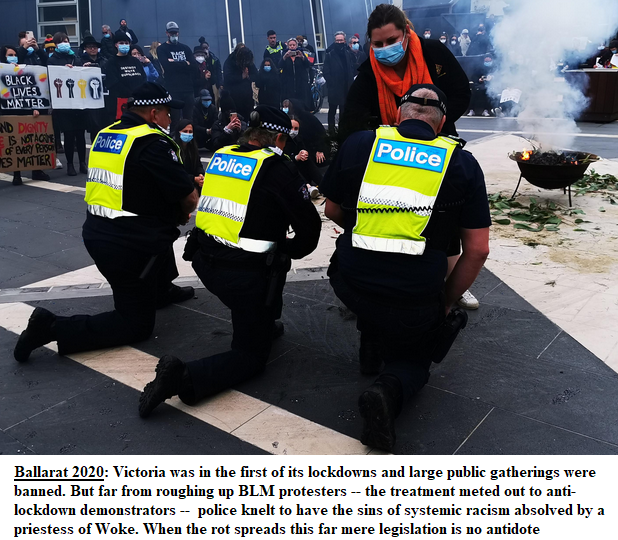 Recently, Coalition senators voted with One Nation to pass a motion put by Senator Pauline Hanson that called for the government to eject Critical Race Theory (CRT) from the national education curriculum. This echoes a flurry of state-level legislation in the US currently being considered or already passed.

The immediate response from the Australian Left was to scream, hyperventilate and simultaneously claim that:

2/ Even if it did exist it isn’t being taught in Australian schools, and

3/ Even if it is being taught in Australian schools it’s essential and the only possible moral way to view Australian history and society. So shut up, you racists.

It’s always nice to watch lefties go frantic as they play their little definition and re-definition games, furiously shifting goalposts when they suspect that they’ve gone too far and the stupid proles might be paying a little too much attention. Senator Hanson has made an entire career over triggering such outbursts. Sadly, this time lefties don’t have much to worry about because the main problem with efforts to ban CRT is that they won’t work. It’s far, far too late for that. The objectionable ideas and worldview of the Left constitutes the dominant belief system of almost everyone in a position of power or influence in the institutions that decide what our culture considers “normal” and what it doesn’t.

The battle is over. The bad guys won.

“Ban” CRT all you like, but the ideas will still be taught by practically every educator, from primary schools all the way to postgrad studies. They might call it something else (in fact they already do) and absolutely nothing any currently elected politician is proposing will make much of a difference.

How did we get here? How did an absurd and hateful worldview most Australians would have scorned — indeed, laughed at — just 30 years ago somehow become so entrenched in the cultural elite’s commanding heights that, even if you somehow managed to stop your local school from teaching it to your kids, they would still likely absorb it through pop-culture osmosis?

The answer comes from the fundamental misunderstanding amongst nearly all Australian’s of conservative bent (and, to be fair, some small chunks of the Left) about where power actually lies and how societies are changed. Consider the  federal Coalition, which has been in power for most of the last quarter century. During this period state governments have tended only slightly towards the left, with significant churn back and forth. The government of NSW, our most populous state, has been overseen by at least a nominally right-of-centre government for the last decade. Theoretically, you would think that, with the Right being so clearly favoured over the Left at the ballot box, Australia’s cultural landscape would have moved at least slightly in that direction (or at least not drifted further leftwards). Yet even to the most half-asleep observer it is gobsmackingly apparent that this has not been the case.

Why on earth should this be so? Clearly, the majority of the population that makes up the Australian voting public is quite happy with right-of-centre ideas, otherwise they wouldn’t keep voting for them. While there has been significant electoral drift in certain areas, such as Victoria, in part due to migration, this shouldn’t have caused such a dramatic cultural-left shift. Recently arrived migrants seem slightly insulated from the general leftward shift of the culture, something indicated by the fact that the gay marriage plebiscite was voted down in Labor-voting migrant-heavy electorates.

In this case demographics appear not to be destiny. Conservatives tend to have larger families. If the old maxim of “the hand the rocks the cradle rules the world” were true you would also be expecting a slow rightward drift. Time after time, statistics show the further left one is politically, the greater the tendency  not to replace oneself through the production of progeny. So the question remains: where are all these new leftists coming from?

Some might dismiss the matter by noting the young are always more likely to lean left, and that children have a tendency to rebel against their parents. The former is a distinctly recent — and, historically, rather an upper-class phenomenon — while the latter ignores the overseas experiences of fecund conservatives gradually outnumbering leftist hedonists in places like Israel and Turkey. In light of these examples (and many others), such excuses sound more like explanations after the fact than any iron rule of history.

The answer is obvious. For over half a century, conservatives have gone to the trouble and expense of having children and sending the best and brightest of them (in ever-increasing numbers) to be tutored by publicly funded activists representing the furthest-left five percent of the population. This has led to the current situation where an intelligent young person cannot hope for a position amongst the political or cultural elite of society without a piece of paper proving that they have spent years being taught that everything their parents believe is not only wrong, but evil.

Voting alone won’t do anything to fix this.

As an exercise, imagine a fantasy world in which Mark Latham proves himself the masterful political operator Pauline Hanson clearly isn’t and gains massively at the next NSW state elections. Imagine an even more fantastical world where One Nation manages to win enough seats to govern NSW in its own right and Mr Latham becomes premier on a platform of reforming the NSW education system by dismantling the current matrix of indoctrination. I won’t present a theoretical where the Liberal and National parties do such a thing; some scenarios are beyond the realm of even the most vivid imagination.

This imaginary One Nation government immediately implements a wider-scale version of Mr. Latham’s recently rejected bill to give parents, rather than teachers, the right to teach their children about not only matters pertaining to sex but issues of race and politics as well. What we would see is an education system expected and obliged to focus on the three Rs, with teachers subject to dismissal via act of parliament should they demur. The education unions would shut down the schools but the overwhelming wave of popular opinion in this imaginary world which brought Latham to power forces them to eventually buckle under.

Then what? The teachers overwhelmingly still believe the things they have been told not to teach. Eventually,  a new government is elected and educators will be free to do exactly as they did before (and probably with twice the fervour). Every trained teacher has been educated in the same universities where the theories you’re trying to stamp out came from in the first place. Who wouldn’t expect them to revert the moment the coast is clear?

And it gets worse. A substantial minority of the parents has also been taught the same political lines as the teachers and they, too, will also resist any change. The majority of journalists, lawyers, doctors, political staffers, social workers and other professionals have also been taught the same worldview. Some have rejected it, of course, but most will see it as at least a valid point of view. The entire elite establishment would be working actively or passively to overturn the democratic decision of the deplorable plebs who, simple as they are, don’t know what is best for them.

Egged on by extreme left groups, their cheerleaders in the press amid applause from their professors, university students would likely be herded by anarchist and Trotskyist groups into “spontaneous” protests and a simulacrum of the mass mob violence and destruction seen recently in the US — all excused, of course, by a media that would never, not even for a second, countenance similar lawlessness from the right.

And just say some of the teachers take the government to court? As anyone who has had any familiarity with the wider Australian legal fraternity can tell you, the ideas and cosmologies that make up the ideological backdrop to CRT are possibly more prevalent amongst activist learned friends than anywhere else (outside your local public high school common room of course).

“Banning” Critical Race Theory means nothing because legislative bodies are only one of the institutions that define the culture of a society. Democratic votes don’t actually mean anything unless the universities (and the other institutions staffed by the elites they train) agree. It may come as news to parents, but it is generally understood within the industry that the fundamental principle of the modern Australian education system is that the content taught is decided by education academics and bureaucrats, not democratically elected representatives.

With respect to the classical liberals amongst us, it’s time for the right to realise what the left grasped at about the time Antonio Gramsci was staring at the roof of his prison cell. The marketplace of ideas might be a fine thing, but if you’re trying to set up a lemonade stall next to a Bunnings when Bunnings is giving away free lemonade you’re going to lose.

Institutions matter more than arguments, and if you’re not willing to support a slow “soft purge” of people who disagree with you while making damn sure you’re replacing them with people who do, then you can pass all the bills in the world and it won’t make an iota of difference to the direction of the country. Gramsci understood this, as it what the Left has been doing in a sometimes unconscious, sometimes coordinated, fashion for almost a century now: making sure that for every conservative who retires (or is forced out, a la Geoffrey Blainey) there is a leftist replacement in the wings. It worked. They’ve won.

Efforts to ban the teaching of  CRT both here and overseas get conservatives and other right-of-centre sorts very excited, if only because the manic and sometimes hilariously hysterical reaction from the Left makes us assume that such efforts are effective. After all, the banning of CRT has some of the worst people in our society (Greens, for example) screaming like a snake bit them, so surely some serious damage must have been done?

Sadly no. The damage is negligible, and histrionics are part of the Left Establishment’s business model. Even our fantasy Mark Latham-led government could do no better than to slow them down. Putting a scratch in the paintwork of a Mercedes might make the owner furious, but it doesn’t affect the ability of the car to take a corner.

Thankfully the first step towards actually slowing down what has become an ever-accelerating juggernaut of bad ideas has been taken. By supporting the rejection of CRT some right-of-centre types seem finally to have signalled a faint awareness that ideas are much more than products in a marketplace, they are weapons on a battlefield. The next realisation is figuring out that the battlefield is not level, and that not only is the high ground of the presiding institutions occupied by the enemy, but that we pretty much let them conquer it unopposed.

The step after that is using fire against fire. That will be the hard one. People as accustomed to losing as are those of the Australian right will take a lot of convincing that the point of a culture war is to win it, not just to lose while being a jolly good sport.

L.S. Bergin is a former soldier and teacher. His hobbies include fishing, football, and watching the ever-loopier progression of Australia’s far Left

19 thoughts on “The Battle is Over. The Bad Guys Won”

Smile, You’re Not on a Speed Trap Camera