Her Majesty and the Ignorance of the Woke 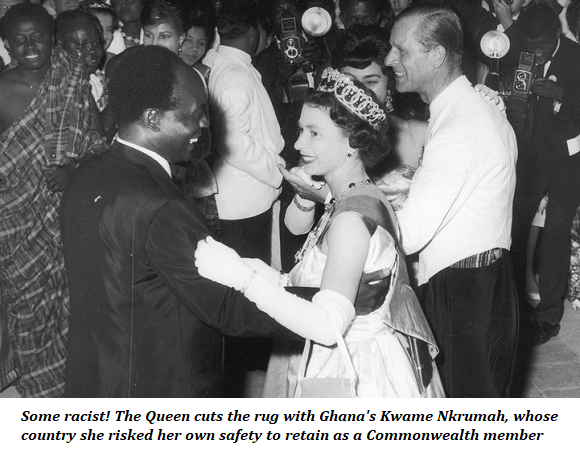 Just days before Her Majesty The Queen celebrates her first Official Birthday after the passing of  her liegeman of life and limb, Prince Philip, woke ideologues at Oxford University’s Magdalen College have maliciously smeared our nonagenarian sovereign as a racist and announced the removal of the royal portrait from the college’s Middle Common Room.

American PhD student Matthew Katzman, who tabled the motion, declared that this latest example of cancel culture insanity was necessary to make Magdalen a “welcome, neutral place for all members”, disparaging the sovereign’s image as an offensive symbol of “recent colonial history”. The announcement triggered predictable outpourings of woke bile from fringe academics like Birmingham City University’s professor of black studies Kehinde Andrews, who defamed the Queen as the “number one symbol of white supremacy” in the world.

But unlike comically ideological professors from third-rate universities who equate Churchill with Hitler and the privileged white son of a multi-millionaire American lawyer, the Queen has done far more to promote decolonisation and racial equality than almost any other leader in world history. The transformation of the British Empire into the Commonwealth of Nations as a free association of equal, sovereign nation-states, including the peaceful transition of seventeen former British colonies into independent republics during the Queen’s reign, speaks for itself. It was she who signed into law the 1980s legislation that achieved the patriation of judicial and legislative powers from the British Parliament and Privy Council to the legislatures and courts of Australia, Canada, and New Zealand.

As for the despicable imputation of racism levelled against the Queen and Royal Family, it is here that Katzman and the other anonymous Oxford postgraduates who voted for this motion reveal their ahistorical ignorance and simultaneously cast doubt on the intellectual quality of today’s Oxford entrants.

Having appointed Major Nana Kofi Twumasi-Ankrah as the first black equerry in the history of the royal household in 2017, obvious examples of the Queen’s commitment to racial equality can be found far earlier in her reign. In 1961, it was the Queen who insisted upon visiting newly independent Ghana against the advice of her British ministers, defying the threat of terrorist bombings to ensure that country’s continued membership of the Commonwealth. The famous image of the Queen dancing with President Kwame Nkrumah elegantly captured the spirit of the Commonwealth as an association of sovereign equals, averting the risk of the Commonwealth receding into an all-white club. That deft act of statecraft has also been widely credited with preventing Ghana from falling under Soviet domination during the Cold War.

When African-Americans were denied the right to vote in US elections and racial segregation remained the norm, the Queen was linking arms and dancing with Ghana’s black president who had been her colonial subject just a few years earlier. Unsurprisingly the Queen would go on to develop a warm relationship with South Africa’s Nelson Mandela, reportedly one of the few people she allowed to address her by her first name. Only the amoebic prejudice of a woke American leftist like Katzman would overlook such obvious evidence of the Queen’s belief in human rights.

Insistent and uncompromising on the principle of racial equality, Canadian Prime Minister Brian Mulroney described the Queen as a formidable behind-the-scenes force in ending apartheid in South Africa. When confronted with British Prime Minister Margaret Thatcher’s reluctance to support comprehensive economic sanctions against the white regime, the Queen resorted to constitutional brinkmanship and threatened to cancel her weekly Tuesday morning audience to pressure the Thatcher Government to fall into line with the 48 other, mostly black, Commonwealth leaders and support the sanctions.

Elsewhere the Queen and royals are rightly acknowledged for their efforts to promote racial harmony. When in New Zealand, the Queen wears a traditional Maori korowai and is seen by the Maori population as a guarantor of their rights under the Treaty of Waitangi. The Queen’s actions vindicate that view: she has met the Maori King on multiple occasions and personally signed the Waikato Raupatu Claims Settlement Act 1995 into law to apologise for the 1863 invasion of lands belonging to the Tainui people.

Outside the bubble of woke white privilege, people of colour worldwide deeply respect the Queen. Look no further than the fact that 12 out of 16 Commonwealth realms where the Queen is sovereign are black-majority nations in the Caribbean and the Pacific. Indigenous peoples in Australia, Canada and New Zealand are frequently the most devoted of monarchists, seeing the Crown as an honest counterweight against the excesses of local officials. Australia’s first indigenous senator, Neville Bonner, was a leading monarchist campaigner in the 1990s. Sierra Leoneans clamoured for the Queen’s return in the 2000s after British military intervention successfully ended a decades-long civil war there.

By contrast, white supremacists have a long and ugly history of anti-monarchy activism. Australian republicanism traces its origins to the late 1800s when a federated republic was seen as the best way to implement the White Australia Policy in the face of opposition from Whitehall, which saw the policy as a threat to the multiracial character of the British Empire and then-warming relations with Japan. The South African National Party under Hendrik Verwoerd engineered a narrow referendum majority in 1960 in favour of replacing The Queen with an apartheid republic after gerrymandering the electorate by abolishing the franchise for the coloured population and campaigning on a platform of Ons republieknou, om Suid-Afrika blank te hou (“Our republic now, to keep South Africa white”). As recently as the 2000s, republicans have openly racially vilified leading monarchist, Professor David Flint, as a “perma-tanned Indonesian-born blow-in”.

Remembering that colonialism is the practice of imposing foreign political control and norms on another country, ironically the only recent example of colonialism in action is the smug and uninformed Katzman’s importation of toxic woke lunatic left ideology from his dysfunctional American homeland into the ancient tranquil environs of Oxford, and his arrogant insistence that his British hosts should hide from public view their head of state and the world’s most respected leader. Left-wing activists must cease mindlessly plagiarising the rhetoric of their American counterparts and desist from using people of colour as the ideological battering rams of their Anglophobic republican agenda.

12 thoughts on “Her Majesty and the Ignorance of the Woke”

The Romney gaffe that wasn’t